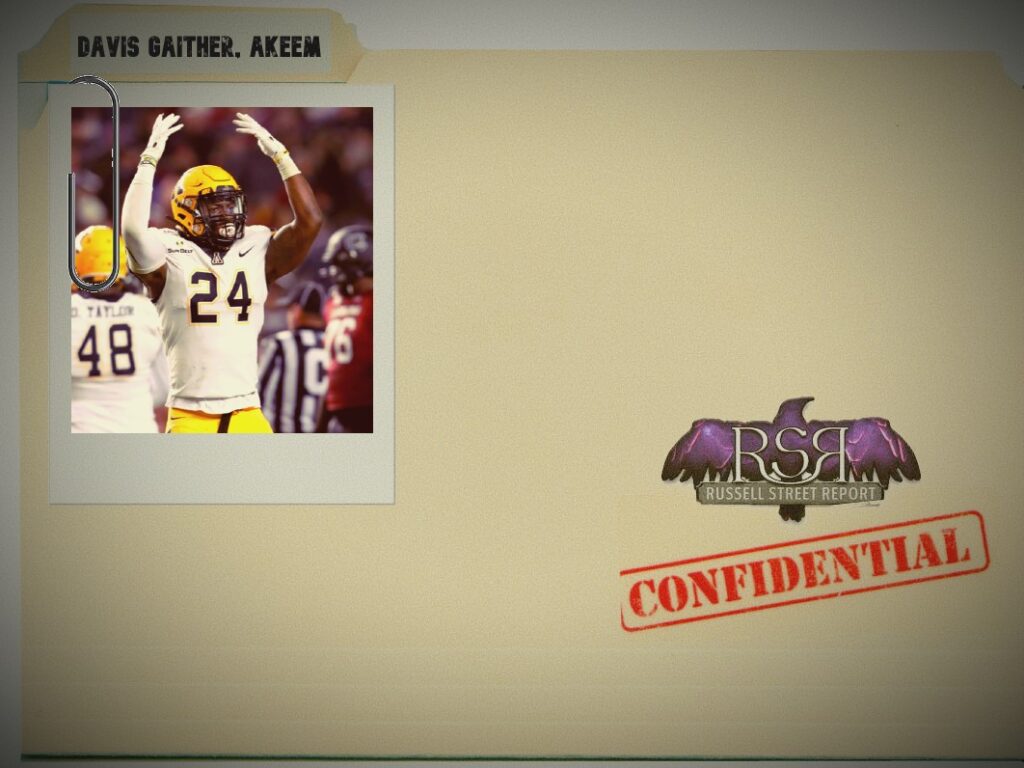 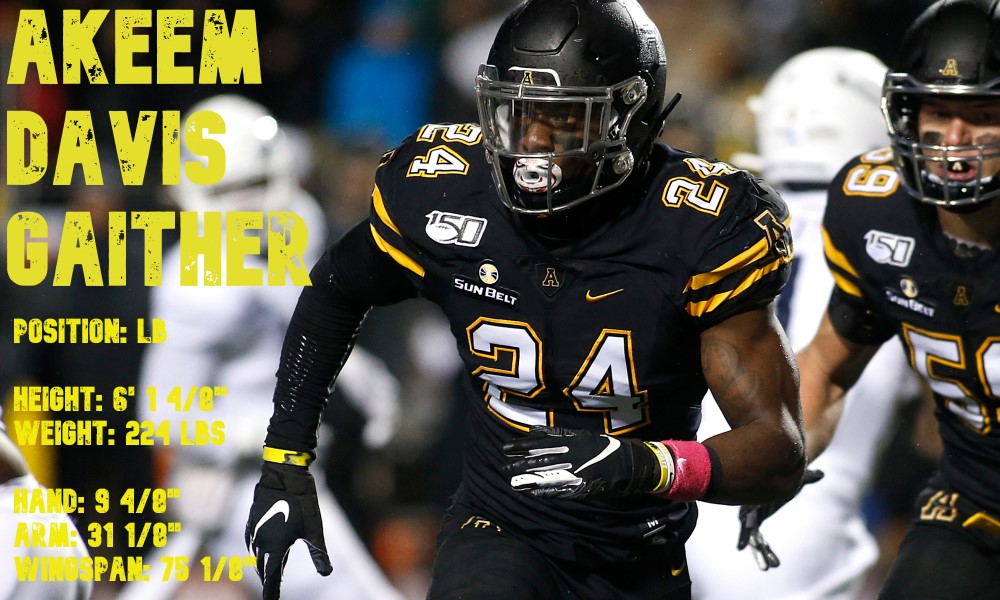 Davis-Gaither is a very athletic linebacker who can be used in multiple spots in the defense. He has very good lateral agility and quickness in space to chase down quarterbacks and running backs. Davis-Gaither has sideline to sideline speed and will give his effort on any and every play. He is above average at shedding blocks, for his height, weight, speed profile.

Teams looking for pass deflections and ball production at the ILB position could get some solid value out of Davis-Gaither. “Special Teams ace” could be a title he earns early on. He is a good run defender; he absorbs contact of running backs but prefers to attack gaps and the edges on rushes for TFLs. The ability to slip past blockers, to bring down the ball carrier, puts him among the top tier of the LB class.

Davis-Gaither lined up on the edge frequently at Appalachian State, but he does not have optimal bend for an outside pass rusher. He has the speed and block-slipping prowess to create splash plays in the backfield, but he does not have the imposing size to deal with strong NFL running backs on a regular basis. Some may call his tweener size a weakness, but in positionless football, it actually enables more versatility to the defensive coordinator that gets hands on him.

Running backs and tight ends will carry Davis-Gaither on tackle attempts. Coverage ability is a weak area of Davis-Gaither’s game, but he has the movement skills to develop into a solid cover guy.

Wink Martindale loves versatile defenders like Davis-Gaither; he can be a chess piec along the second level of the defense. He would compete with L.J. Fort and company for playing time at Will Linebacker. Davis-Gaither has top-notch athleticism to be a chase LB. Development in pass coverage will be crucial to his career; he could go from a 1-2 down player to an every down guy.

Lining up Akeem Davis-Gaither in the strong safety position, edge, weakside LB, and strongside LB are all options that would be at Wink’s disposal. Disguising blitzing defenders while adding more speed to the defense would be an enticing move for Baltimore.

He also adds strong value to the special teams units. He could come in as a gunner, a rusher on field goal attempts, and eventually become a ST captain.

Grugier-Hill and Davis-Gaither have more in common than hyphenated last names. They both have tweener size, although Davis-Gaither is a bit smaller. The idea of a big safety or a small linebacker has been around for a while, however it became more popular with the Tampa Bay Buccaneers (Mark Barron) and Arizona Cardinals (Deone Bucannon).

All of these guys fit this physical profile of small linebacker and big safety. Akeem Davis-Gaither can become more than a sub-package player, but will begin his career on special teams and specific defensive groupings.

Akeem Davis-Gaither will help out a special teams unit right away. He has a ton of upside as an ILB and could develop into a top 3 LB out of this class. He is currently a little bit raw in coverage, and he doesn’t have the bend to be a top-flight edge rusher on 3rd down. He has some special ability to slip by blockers for tackles in the backfield. He has the athleticism to chase RBs, TEs, and spy QBs.

Akeem Davis-Gaither will make one team very happy they chose him.