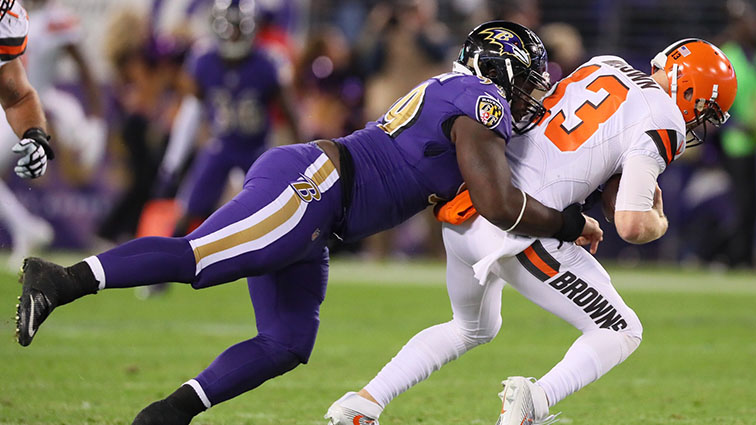 As a fan, you love turning on NFL Network to the tune of “the Baltimore Ravens are winning free agency.” However, today is not one of those winning days, RSR Editor-in-Chief Tony Lombardi wrote in his latest. Basically, the Ravens were not able to reel in DT Michael Brockers. Jonas Shaffer captured this from Brockers’ Instagram:

By now, hopefully, you’ve read Tony’s insightful piece about the slip of a deal. Now let’s talk about the moves going forward the team could make to shore up what appears to be few holes in the Ravens’ front seven. It’s no secret that the team is looking to build a front of Derrick Henry stoppers.

To do that, here are three options that would help the team significantly going into the 2020 season.

I was going to go with Denver Broncos Shelby Harris, who was a free agent until last night when he signed back with the team for cheap. However, since he is off the market, I had to dive deep for this one. NFL.com is marking Timmy Jernigan as damaged goods due to injuries. I believe a change in culture and conditioning could help this 7th year player return back to form. The former 2nd round pick was traded from the once-stacked Ravens to the Philadelphia Eagles in a deal that included the swap of 3rd round picks. Baltimore used that pick on the now departed Chris Wormley.

The vacancy is clearly there on the Ravens D-line. Jernigan would definitely come on the cheap, seeing as how the Eagles declined his $11M option April of 2019. Yes, the former Super Bowl Champion broke his foot last September. However, imagine getting a steal of a veteran player who if healthy by camp, knows the Ravens’ system and has chemistry with Brandon Williams already.

The question definitely is health. We saw how Baltimore dealt with the Brockers situation. Jernigan would be similar. He’ll need to prove healthy.

After reviewing the tape on Mack, I could see why the Ravens drafted him in the 5th round last year. At 6-1, 336lbs, Mack is a force to be reckoned with. He has a great balance of speed and strength that will turn some heads at camp this offseason (if there is one).

Charlie Mack of walterfootball.com had this to say about the former Texas A&M player:

“For years with the Aggies, Mack would flash some special ability, but he was a rotational player because of poor work ethic and not staying on top of his conditioning to take on a lot of snaps. Mack still needs to improve his conditioning, but he showed that he has a good skill set with quickness, pad level, power, and a strong base.”

As you can see, there is an upside and downside with Mack. However, with proper conditioning and staying away from whatever Michael Pierce was eating last year, he should show progress from his 2019 debut that ended early due to “injury.”

Mack only played nine snaps last season, and according to Tom Pelissero on twitter, the team just needed to make space. The 160th overall pick tallied 27 tackles for loss, eight sacks, and two forced fumbles through his collegiate career.

With Pierce signing with the Minnesota Vikings, Mack could have the opportunity to play alongside Brandon Williams and show his true potential.

EDC led on in an interview at the NFL combine that there was plenty of late-round depth at WR. Aaron Kasinitz of pennlive.com wrote this in an article on the matter:

“…Even so, DeCosta’s words Tuesday suggested that he wasn’t gung-ho about the idea of using the Ravens’ first-round draft pick, the No. 28 overall selection on a receiver.”

I mention this because there are a few holes to fill on the Ravens’ defense. Inside linebacker, outside linebacker, and now defensive tackle are all needs. With the 2019 AFC North Champions possibly ignoring the need for WR in the first round, there should be plenty of options available at 28. I’ll focus on the best DTs available at the draft position.

This 6-3, 303-lb mauler has made progress in each of his college seasons, racking up a total of 176 tackles, 17 sacks, and four forced fumbles in four years. He looks best when coming off the edge. While the Ravens want another run-stuffing back, Davidson’s size and speed may serve a dual-purpose as the team still has a focus on bringing pressure to the QB.

I am not sure about Ozzie Newsome’s passion for Alabama players passing on to EDC, but here is a guy at 6-7 that he cannot overlook. He is known for his ability to stuff the run and has significant upper and lower body strength. What I like about this guy is his ability to lean and place all of his body weight on opposing linemen at the snap. Why not take a chance on a guy who can take on double-teams and clog the middle? As long as he can avoid getting shot again in an Alabama bar, look for this talented tall guy to go off the board in round two.

Chase Young did not disrupt opponents alone. He had some help. Ohio State’s entire D-line was disruptive in 2019. Hamilton has vision and ability to get off a block using his hands purely to get by linemen for the tackle. 28 tackles and six sacks in 2019 aren’t glaring first-round numbers, but later rounds (say, the third) could be the spot to land a guy who likes to get into the backfield.

Obviously, EDC has his strategy to address the line, but looking at the options he has, look for the Ravens’ defensive mourning from the Brockers’ flop to be short-lived.