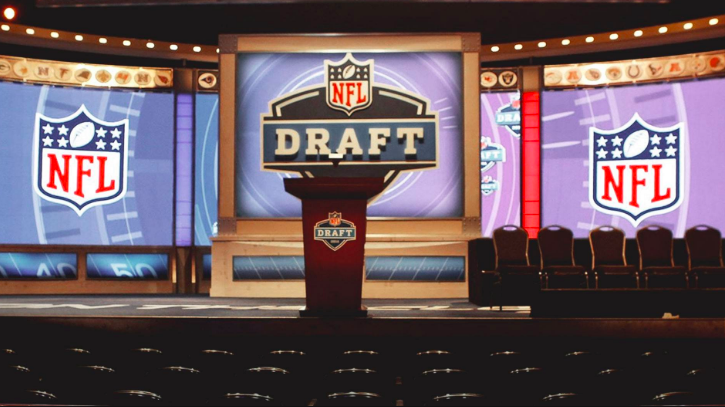 With the NFL draft rapidly approaching, coupled with a mass wave of mock drafts thrown out there from the pros & the average Joes alike, I think I need to throw in my two cents on the process, what I think is an appropriate strategy in the 2020 NFL draft, and how I would go about my business if I were Eric DeCosta.

I’ll preface with a quick note about the myriad Ravens fans that have sent their mock drafts (Flock Mocks, if you will) to our Ravens Draft Central team of Matt Wise, Cole Jackson, Jake Vogel, Chibs, & myself… thank you all. We do what we do (profiles, scouting, big boards, etc) because we live and breathe the NFL draft, and the fact that many of you share your similar draft passions with us is just flat out awesome. We love being part of this exciting chapter of the upcoming NFL season with all of you, and we’ll continue to dive deep into the prospect pool as we strive for the perfect Ravens mock draft…

Which brings me back to my draft strategy!

While many folks hear “Ravens draft” and immediately blurt out “BPA” or “Best Player Available,” I think the concept needs refined in definition. After all, the Ravens aren’t going to take Justin Herbert at 28 if he’s their BPA, right? Just like they wouldn’t take a wide receiver at picks 28, 55, 60 and 106 if that just so happened to be the ‘best player available’ either. Instead, I recommend a modified term.

What exactly is BPA+? In short, it’s something I just made up this offseason. But I guess that’s useless information unless I explain further…

In my eyes, DeCosta and the Ravens should be (and for all we know, could be) taking their Big Board of players and applying additional factors into the equation when truly ranking them on the boards. For starters, we should be determining what players are vital, versus depth needs, future-proofing, and those players that are not necessary to draft at all (you still evaluate these positions, as it helps in trade talks when you know the value of players that teams covet, in order to maximize value in return).

Based on the construction of the current roster, here’s how I would divide the position groups in terms of draft needs:

Surely, somebody will argue with me about running back being a depth need versus future-proofing, but the way I see it? The Ravens have Mark Ingram (5+ ypc), Gus Edwards (5+ ypc) & Justice Hill (3.9 ypc in limited usage) under contract through 2021 & it’s not necessary to over-dilute the RB Room unless a stud falls into their laps later in the draft.

To use these categories as a focus without any additional context would be effective to figure out how to address positions of need down the line, but is it enough? Can you see the Ravens up at Pick 28 and simply say “well it needs to be one of the vital positions!” What if Xavier McKinney is there? What about Ross Blacklock or Neville Gallimore?

Another layer is needed.

Taking these four groupings (Vital, Depth, Future, Irrelevant) I would then create a multiplier range to differentiate value (for the Ravens) of that particular position. Once ranges are created, I’d order the groups within themselves in terms of ‘need,’ and place individual multipliers to each positional group.

Confused? Check it out…

So now we’ve created a tiered system of positions in the draft, ranked them within the tiers, and valued them with a multiplier, accordingly.

Ideally, the next step would be for the Ravens to take their Big Board, and assign each player a value or grade, sans the multipliers. This is fairly common practice, and simply for the sake of nobody arguing with my personal big board, I’ll use Lance Zerlein’s valuations on NFL.com for reference.

If you want to fight the grades? Fight Lance, not me.

At this juncture, it’s just basic math. I’m applying my multipliers for each position against the grade to provide a true value, or what I’m considering the BPA+ model of prospect ranking.

To give you a look, based on LZ’s grading, here’s how the Ravens Big Board for the top 32 graded players would look using this model. 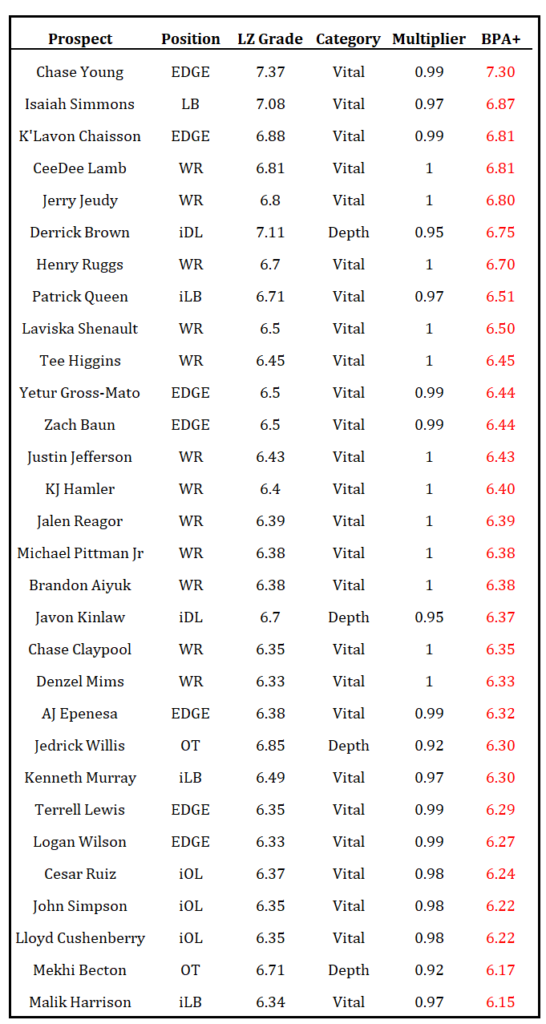 I see Claypool up there too. Again. Cannot stress enough. These aren’t my rankings!

Essentially, this should be (and likely, IS, in some form) the Ravens’ play on BPA+ and how they view the draft… in it’s infancy. Surely, this strategy would vastly improve the value of the needed positions on the Ravens roster, while not totally distancing themselves from other positions of depth and future proofing, and serve a better purpose than a straight forward “BPA” model.

While this is one approach to addressing the NFL Draft for the Ravens, I still think more can be done to further delve into prospect ranking in terms of value per round by each position, but that conversation we’ll save for another day…