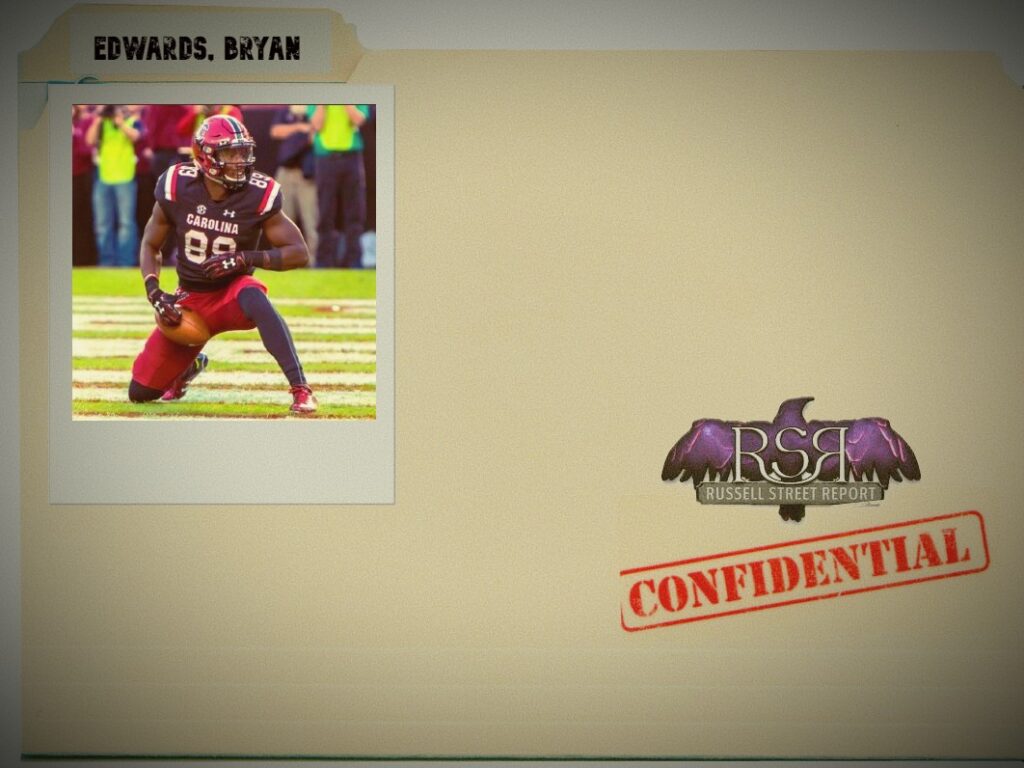 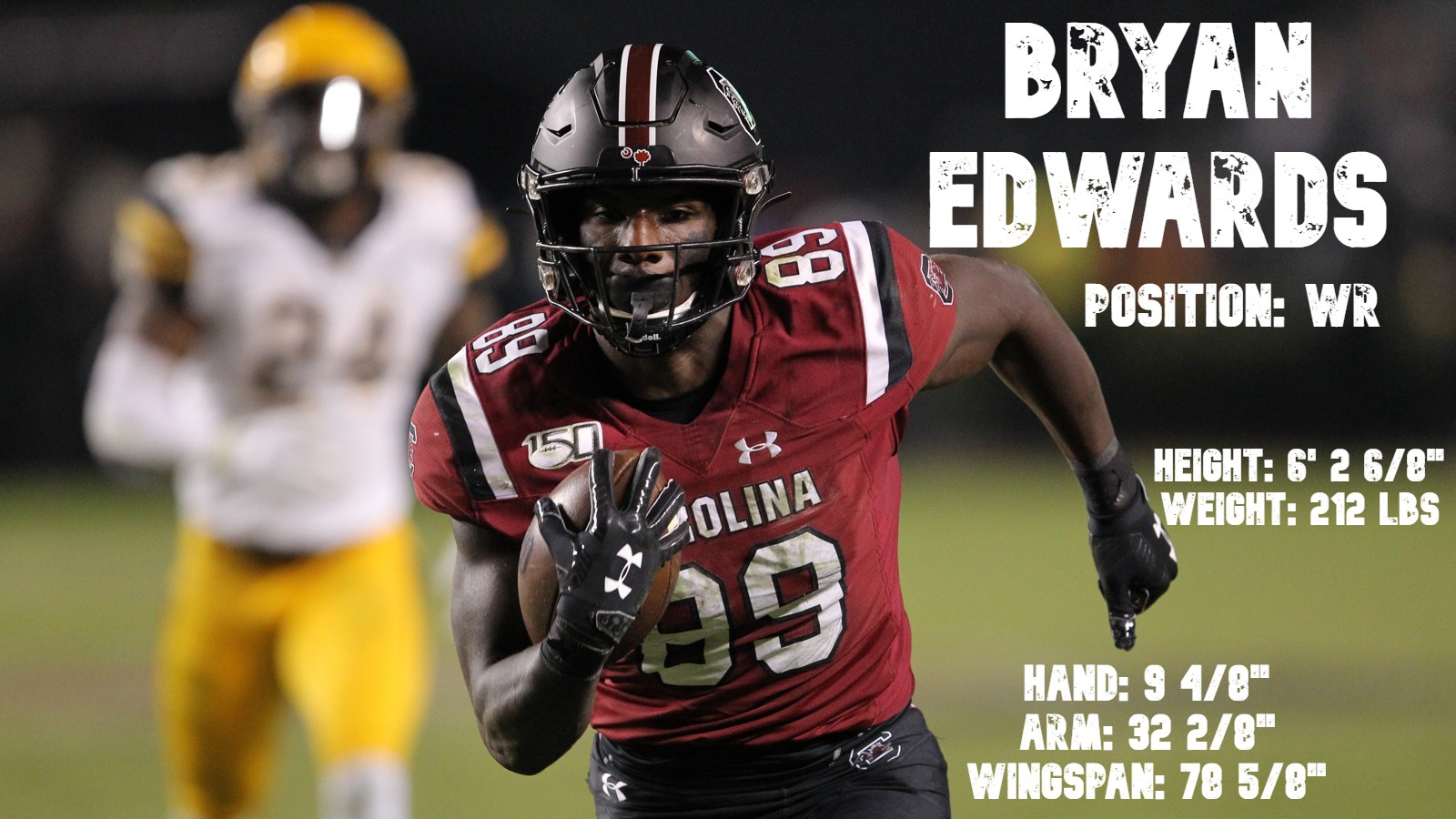 Bryan Edwards was highly recruited coming out of high school. He had so much talent and recognition even in middle school that South Carolina offered him a scholarship at the age of 13. He received the Gamecocks OMVP in 2017 with 64 Rec, 793 Yds, and 5 TDs. Deebo Samuel overshadowed him a little bit in 2018, but in 2019 Edwards was named second-team All-SEC. In 2019, Edwards returned seven punts for 125 yards for an average of 17.9 yards. Teams will want to get doctors’ opinions on his recent foot injury (during training) and knee injury from the season.

Some wide receivers play a finesse brand of football, while others play with power at the POA (Point Of Attack) and throw their weight around. Bryan Edwards fits the latter mold; he is a guy that gives supreme effort when the ball is in his hands, and he does not go down easy.

Edwards consistently moves the pile on ends-around and short receptions in traffic. He is a weapon just waiting to be unleashed onto the opponent. Edwards is not a blazer, but he has very nice game speed (shows the ability to break-away), he has very good strength in running through contact, and he has some 50/50 ball skills (not to the same level of some other guys his size).

Edwards has some nice mitts, but he struggled a little bit with concentration drops and balls thrown behind his frame. He creates a decent chunk of YAC by taking screen passes, slants, drags, and option routes for moderate gains. Sometimes running backs are attributed with the quality of bouncing off defenders or breaking tackles, but that quality also describes Edwards’ game. A “Deebo Samuel” type receiver is the next big thing in draft circles, but his former teammate, Edwards, has some of the same skill-set with a bigger frame.

Edwards is a pretty good route runner, especially on comebacks, curls, and in-breaking routes. He also has enough sell in his double moves to toast corners for easy catches.

Edwards has a lot of college football experience, which will help him succeed early on in the NFL. He has good hands, but struggled a little bit with concentration drops; however, that is something coaches will be able to help him clean up at the next level. Edwards plays very physical when he has the ball, but does not have that same swagger/big-boy mentality in the air.

Edwards will be able to work on his contested catch ability, but right now it is one of the weaker points of his game.

The Baltimore Ravens will be licking their chops in the second or third rounds to get this guy. Edwards could immediately come in as an offensive weapon; Greg Roman could use him on ends-around and sweep action plays to get him the ball early and often.Edwards has some serious contact balance and strength with the ball in his hands. He can run most of the route tree pretty well, and could be the X (possession) receiver Baltimore would grow to love.

Hollywood, Edwards, Boykin/Snead, Andrews, and Ingram/Hill would make up a nice skill position group for the passing game. Edwards showed the knack for making clutch, chain-moving plays on 3rd and 4th downs in college, and I think that could continue in Baltimore.

Lamar would have another sure-handed checkdown option with big time YAC upside. Edwards also developed into a solid punt returner at the University of South Carolina, so he could compete with DeAnthony Thomas for that role as well.

These players were linked with their physical makeup on mockdraftable, but there are some differences to their game. Edwards succeeds on the short to intermediate area of the field, while Davis had more success with deep and 50/50 balls when coming out of college. Davis has been a bit of a disappointment in the Titans’ offense, but he still has good football ahead. Edwards will definitely have the ability to match or surpass Davis’ early NFL statistics.

Bryan Edwards can come into an offense on day one and become the number 2-3 receiver. His ceiling is that of a high caliber number two wideout, and his floor is a solid number 3 receiving option. Edwards will best be used as a creative/ versatile weapon on created touches and quick hitters, but he can develop into a number two X receiver.

The team that nabs Edwards will be getting a steal; he can be a punt returner and special teamer as well as an important piece of the WR room.