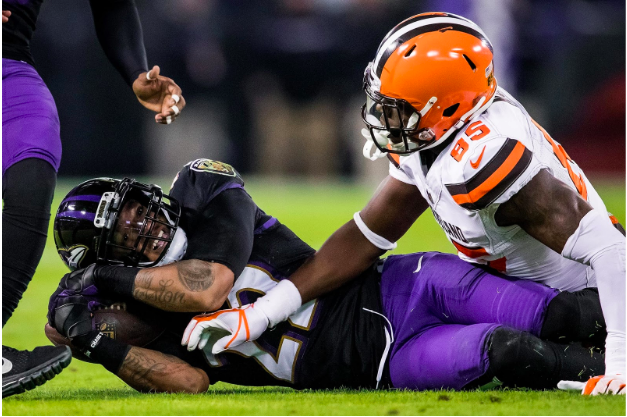 There’s a price to pay for success far as the NFL Draft goes.

A successful regular season means teams are pushed farther down the board to make their selections.

The Ravens are among a select few franchises that have dealt with the challenge of consistently picking in the bottom of the rounds, having been been slotted 25th overall or later in seven of the past 10 drafts.

The late selections have not changed their approach or overall strategy.

“I think the biggest thing we do as scouts for Eric [DeCosta], and John [Harbaugh], and Ozzie [Newsome] over the years is we try to give them all the information and stack, and give them our rankings, and our order, and get the guys in the right spot,” director of player personnel Joe Hortiz said. “I think Eric [DeCosta] said, ‘Whether you’re picking sixth or 26th, you’ve got to have the guys lined up to pick.’ ”

However, two linebackers being linked to the Ravens — LSU’s Patrick Queen and LSU’s Kenneth Murray — could be gone by the time the team is on the clock with the 28th overall selection.

Would DeCosta be tempted to trade up a few spots for one of those players?

“Sometimes the best trades are the ones you don’t make,” DeCosta said. “We just assess case by case and see what we can do.”

The Ravens also appear ready to take advantage of the depth of receivers in this year’s draft. The team used a first-round pick last year on Brown. DeCosta likes some of the players that might be available in the later rounds, most notably Kentucky’s Lynn Bowden, Notre Dame’s Chase Claypool, USC’s Michael Pittman and Florida’s Van Jefferson.

“I think it’s just the amount of really good players in the draft at that position. In most years, you probably expect those players to fill up the first three rounds,” DeCosta said. “We think this year that there’s a really good chance to get a guy that can probably be a starter for you in the fifth round of the draft.”

The Ravens certainly have the experience taking players at the bottom of each round. Sometimes, it’s where they do their best work.

“It’s challenging and it’s fun,” Hortiz said. “You’ve watched some good players walk off the board before you’re up, but you always know you’re going to get a guy that falls to you, hopefully, and it’s exciting to watch it happen. I don’t think there’s a change in approach. It’s just getting the guys in the right order for the Ravens.”