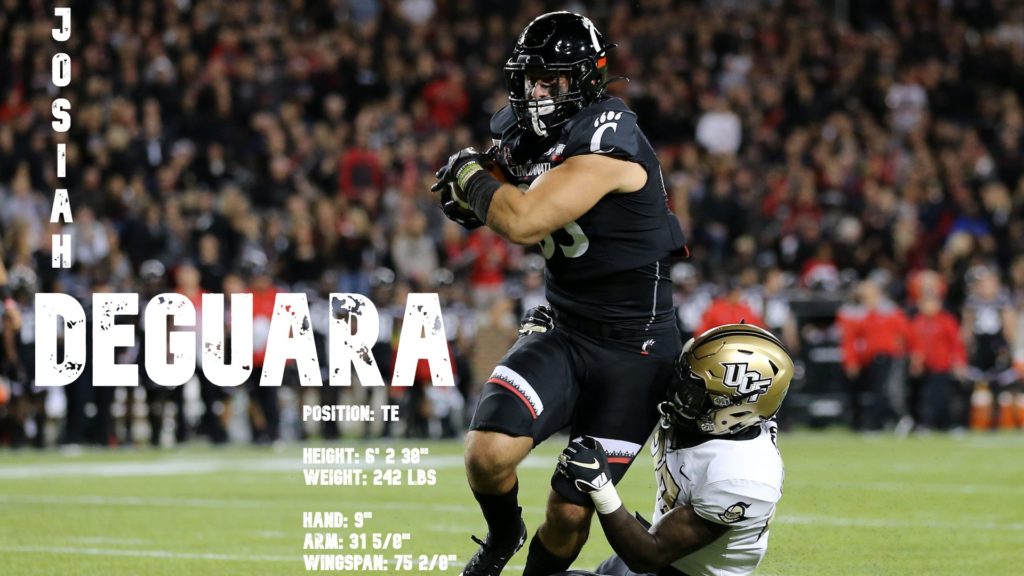 The most fun week of the NFL offseason is finally upon us. Believe me when I say that I’ve been waiting impatiently for this since the Ravens suffered their heartbreaking loss to the Titans in January. This team is unquestionably right there, missing a few key pieces that should be able to put Baltimore over the top. Through my own preparation and the opinions of many experts, I think the ranking for Ravens’ needs should be: ILB, iOL, EDGE, WR, TE, iDL, S, Slot CB. In my first and final mock draft, I am hoping to fill as many of those holes as possible – if not all – while also considering the best player available.

For clarification, I will be using The Draft Network’s program, mixing their own draft board with my own feelings on prospects I believe could be impactful at the next level.

With the first pick in the 2020 NFL Draft, GM Eric DeCosta works toward filling out one of the team’s biggest holes by selecting Baun, a versatile and productive EDGE player from Wisconsin. Given the way the board fell, I felt this would be a prime position for the Ravens to trade back, but I elected to run this mock without trades for simplicity’s sake. Other players who were available that I considered were WRs Denzel Mims and Brandon Aiyuk, RB DeAndre Swift, and DT Neville Gallimore.

While I think all of these players could be incredibly successful with Baltimore, Baun presented a nice option given his ability to both rush and cover. He may not be the best pure pass rusher in the draft and thus might not create too much excitement, but I believe he could play a Jarrett Johnson-type role with the Ravens. Any time you have the chance to get a player with that kind of consistency, you should take it.

There were a few options I felt were viable at this stage in the second round, though I fully expect the Ravens to move up for a player they covet on Day 2. While I ultimately elected to draft Harrison, other players I looked at were EDGE Joshua Uche, DT Justin Madubuike, and fellow ILB Willie Gay Jr. At the same time, two WRs were intriguing in Tee Higgins and Michael Pittman Jr.

Given the fact that I’d be back on the clock shortly, I chose the plug-and-play linebacker in Harrison, who should be highly productive in the middle from the get-go, especially since he won’t be forced to take on the green dot responsibilities. While I’ve gone heavy on defense thus far, I feel very good about where the unit stands after just two selections.

As I alluded to already, I felt the depth at WR was strong enough to wait for my next pick to address the position. Pittman Jr. was the player I wanted the most at that spot, and I am ecstatic that he’s available. While I did consider Madubuike and DT Raekwon Davis, as well as the exciting IOL Robert Hunt and RB Clyde Edwards-Helaire, I don’t feel those positions need a jolt as much as WR does.

Pittman Jr. will be the perfect blend of size, speed, and hands to complement Hollywood Brown. Lamar Jackson has his chain-mover, but this one has the ability to stretch the field, as well. I cannot say enough about how much I love this fit.

I wrote that I believed iOL was the Ravens’ second-largest need after Marshal Yanda’s retirement, so you may have been wondering when I’d address it. The answer is with the first pick in the third round, in the form of Lewis. While I’m not certain that Lewis is fine-tuned enough to take on a full-time role, he has incredible skill as a run blocker and should be able to improve competition inside. Also, with the impressive track record of OL Coach Joe D’Alessandris, Lewis could improve quickly. At this spot I did look closely at the TE position with Brycen Hopkins and Thaddeus Moss on the board, as well as the secondary with K’Von Wallace (whom I love) and Amik Robertson (whom I also love), but the need was simply too big to pass up a prospect of Lewis’ caliber. Still, I’m not entirely confident that I’ve sufficiently filled the hole at iOL just yet.

Gibson is one of my favorite players in this year’s class, especially for the Ravens. He’s in many ways similar to Kentucky’s Lynn Bowden, whom RSR has written about previously, as he can play a multitude of positions and is dangerous every time he touches the ball. I am not one who believes Baltimore needs a running back in this year’s draft, but I view Gibson as a valuable gadget player who not only could take off in Greg Roman’s offense but could drastically improve the return game from the start. While other players like WR Darnell Mooney, IOL Tyler Biadsz and EDGEs Jabari Zuniga and Khaleed Kareem could have been the pick, Gibson’s potential with this team is incredible. Quite simply, just get him the ball.

While Harrison will be the prototypical ILB that the Ravens need, Robinson should be able to provide more when it comes to underneath coverage, where he can dominate. His unconventional route to the NFL will present a bit of a risk, but he has a knack for taking the ball away and is a willing tackler. In this spot, I also considered DT Leki Fotu, iOL Ben Bredeson, and EDGE Anfernee Jennings, but Robinson seemed like the clear choice.

DC Don Martindale should be able to use Robinson in a variety of ways early in his career, he should provide immediate value with the special teams unit, and he could turn into the heir to Earl Thomas down the road.

With Bredeson still available a few picks after taking Robinson, I felt he was a relatively easy selection. The Ravens should have plenty of intel on him given his time at Michigan, and he projects as a very solid, consistent option along the line. In fact, though I took Lewis much earlier in the draft for his potential, I feel Bredeson has just as good a shot of starting on the line this year.

After Fotu was taken in between Baltimore’s fourth-round selections, I found this particular choice to be between Bredeson and Jennings. Given the lingering uncertainty at the position even after taking Lewis, I felt DeCosta would want two swings and would value the depth either way. Thus, Bredeson.

Moving onto the Ravens’ second-to-last selection, I felt the TEs available were too good to pass up. Harrison Bryant was there, as well, but I’m a believer in Deguara’s ability in Baltimore’s offense, and I think he should be the perfect third man in the rotation.

Blending strong hands in the pass game with a consistent willingness to block, I think Deguara should be able to quickly impress the Ravens and grow into a key cog in the offense.

In all honesty, I have no clue what the Ravens will do with their last pick in the 2020 Draft. That being said, I believe Bryant is an intriguing name if he’s still available. Baltimore does need help at the slot corner position due to the uncertainty with Tavon Young’s health, and Bryant is a promising player with a very similar skillset. Though he’s small, Bryant excels close to the line of scrimmage and plays with the same tenacity that made Young a stud early in his career. Other players I looked at closely were OT Colton McKivitz, ILB Michael Divinity Jr., and EDGE Carter Coughlin, but I felt Bryant’s potential as a future slot corner made him the most valuable player so late in the game.

Overall, I feel this draft haul is quite strong, addressing needs with value picks. If DeCosta were to bring in this crop of talent, I’d feel incredibly excited about the continued prowess of the offense, as well as the state of the linebacker crew. At the same time, I would have preferred to bring in more talent along the defensive line, both at the EDGE position and the interior. Of course, the draft doesn’t always fall that way, though, and I didn’t see any prospects available who warranted a pick given the spot in the draft. Ultimately, this mock sees Baltimore bring in tremendous talent all over the field, with my personal favorites being Harrison, Pittman Jr., Gibson, Bredeson and Deguara. Let me know where you think I went right or wrong in the comments!