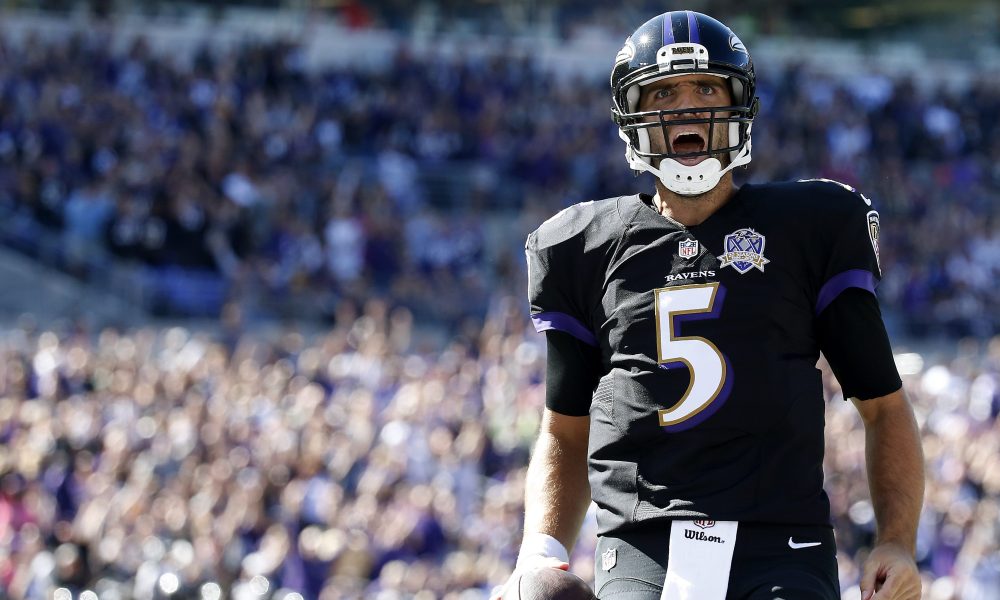 For many seasons it was a position of frustration for most Ravens fans. During the inaugural season, Vinny Testaverde could light up a scoreboard for three quarters but then fade during crunch time. Frustrated by the fourth quarter sleepiness of his quarterback, head coach Ted Marchibroda often looked to Eric Zeier for help. Little was found.

By 1999, Marchibroda’s time was up and in walked Brian Billick to skipper the Ravens sideline. Billick was brash and brought needed swagger. Billick also bought into the hype that he was an offensive guru, believing he could resurrect the dying careers of Scott Mitchell and Tony Banks. The pair was so ineffective early on, that relatively speaking, Stoney Case, a 1995 third-round pick and castoff of the Arizona Cardinals, emerged as a short-lived cult hero with his preseason prowess.

Banks survived 1999 and hung around for another season, before turning over the reins of the offense to Trent Dilfer in 2000. Dilfer, another Billick reclamation project, wasn’t the most graceful of quarterbacks, but he did manage that game well while minimizing mistakes. With that defense, it’s all the Ravens needed the former first-round pick of the Tampa Bucs to do. The rest, well, you know the rest…

The next season, tired of his challenged offense, Billick & Co. brought in Elvis Grbac. Grbac didn’t stay around long. The Ravens asked the 2000 Pro Bowler to renegotiate his contract following the 2001 season and when he refused, Elvis left the building, and shortly thereafter, retired. In 2002, Jeff Blake and Chris Redman dueled for the starting job, neither much more effective than the other. The following season the Ravens drafted who they thought would become their franchise quarterback. 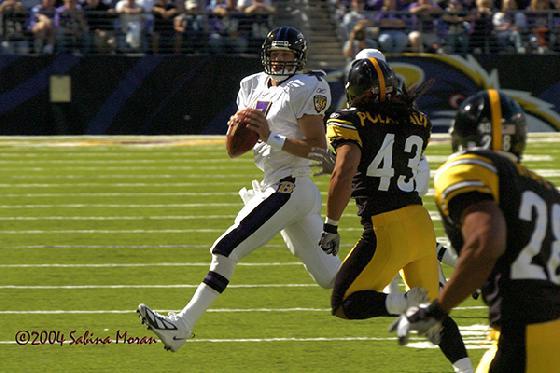 Kyle Boller was named the starter by Billick by the end of the rookie’s first training camp in 2003. Blessed with physical gifts, Boller was wound tighter than a snare drum. He played with aimless, frenetic energy. The Ravens offense looked like a rudderless ship but the defense kept the team afloat. Boller started 9 games before injuring his thigh. He was lost for the season. Anthony Wright stepped in and went (5-2) as the starter, leading them into the playoffs, where they lost in the wildcard round.

The following season Boller returned as the starter while Kordell Stewart was signed to be the backup. Boller started every game in 2004 but the Ravens fell short of the postseason with a (9-7) record. Wright returned in 2005, a disaster of a season that marked the end to Boller’s days as the Ravens regular starter. Wright left as well.

In 2006, the Ravens traded for Steve McNair who led the Ravens to a (13-3) mark. The promising season came to a crashing halt during the divisional playoff against Peyton Manning and the Colts. McNair was awful during that game, seemingly a physically tired and beaten man. That weariness carried over to 2007 when McNair played in just 6 games. The Ravens finished (5-11). 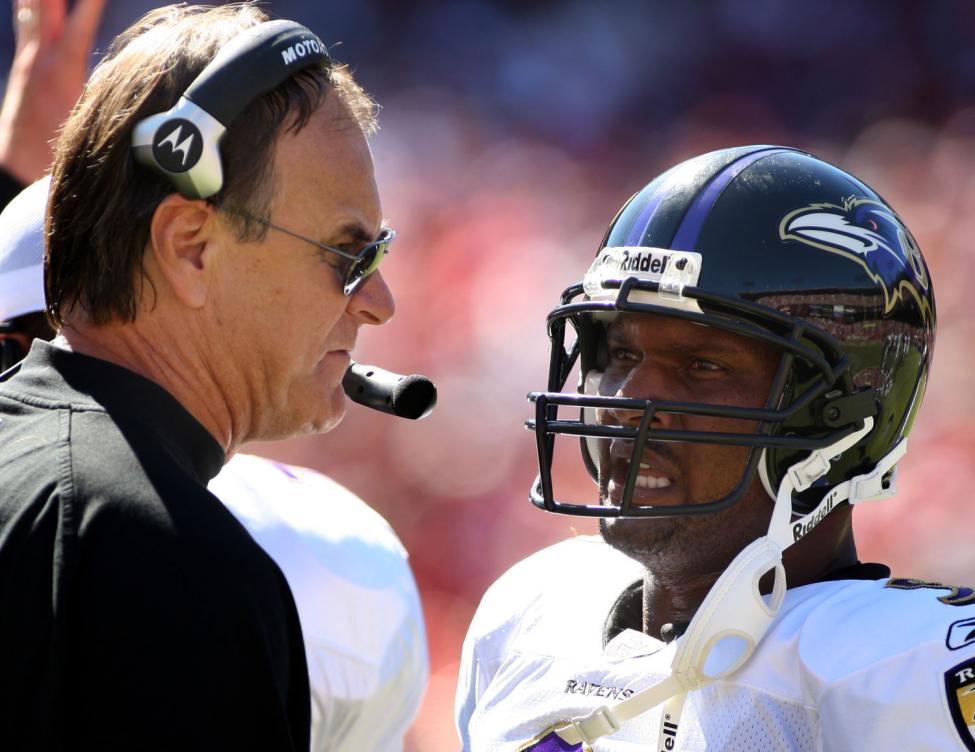 The offseason of 2008 was fueled by owner Steve Bisciotti’s desire to land a franchise quarterback. Enter Joe Flacco.

Flacco helped the Ravens land five consecutive playoff appearances, the last of which culminated in a Super Bowl title and the big game MVP for the former Blue Hen. Joe brought stability, dependability and durability to the position – something that the franchise missed during the 12 seasons prior to his arrival. Joe remained the de facto starter until just past the midpoint of the 2018 season.

Flacco hurt his hip in 2018 forcing him to the sidelines for the final 7 weeks of the season. During his absence, Lamar Jackson rejuvenated the club and carried the team into the playoffs on the wings of a (6-1) record. The Flacco era was over. One season later, Lamar became the league’s unanimous MVP. 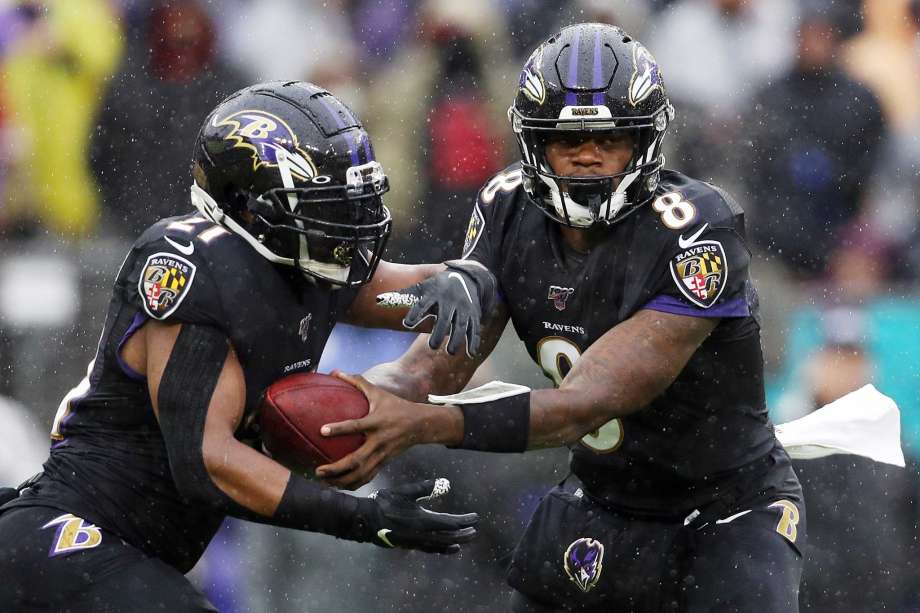 So, there’s a brief lesson in Ravens quarterback history. Now it’s time to pick two from the list below, to finish our 53-man squad. To vote on the balance of the All-Time 53-man team click HERE.