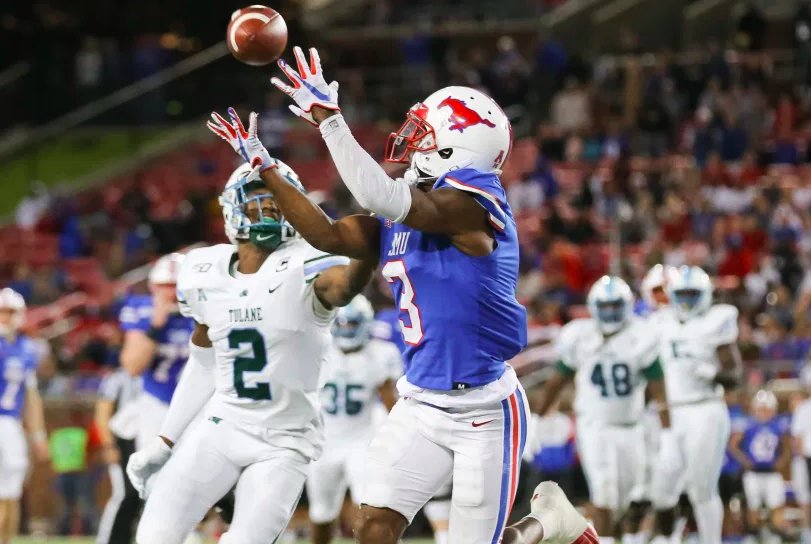 James Proche left DeSoto High School as a 4-star recruit and ended up choosing Southern Methodist. He got involved in the offense after sitting out a redshirt year, posting 57 Rec, 709 Yds, and 6 TD. He achieved first-team All-American Athletic Conference in his final two seasons at SMU. His punt returning averages improved every year at SMU, finishing with an impressive 17 returns for 164 yards at an average of 9.6 yards.

Proche has one very elite quality, his ability to catch the football, which is perhaps the greatest ability that a receiver can have, but he has some very average athleticism to pair with his hands. Looking through my notes from watching Proche, a couple things stand out….the amount of times I wrote “great hands/ catch” and the number of times I wrote “small gain.”

Proche caught innumerable speed outs, screen passes, and swing routes…that all went for small yardage per reception. An area that Proche wins is at the catchpoint (the guy has great hands); he simply attacks the ball well and finishes with strong hands. The 50/50 ball does not seem ideal for a player of his size or athletic limitations, but Proche makes it work. Proche’s tape has many more good plays than bad, but his transition to the professional level may have to begin with work as a punt returner.

Proche has star receiver level hands; think Jarvis Landry, Keenan Allen, and OBJ, so one could imagine how those hands enable him to field wobbling or spiraling punts. Field vision and contact balance are other strengths for Proche (these help him as a PR). He lined up outside quite a bit at SMU, but I believe his more natural fit in a traditional NFL offense would be as a slot receiver.

Greg Roman does not run a traditional offense, and I think the creativity to move guys around could give Proche solid looks as a boundary receiver or as a slot.

Proche is a very solid receiver; he gets some separation/open looks, he catches the football in contested situations/tight coverage, and he occasionally makes a big play. His biggest weakness is his average athletic ability. He does not have twitchy speed to get open often, he does not break through tackles like Devin Duvernay, and he relies too heavily on contested catches. Proche does not gain many yards on plays designed for YAC. He is certainly sure-handed and he’ll be a welcomed addition for Lamar Jackson as a checkdown option; however, the Ravens offense is built on efficient passing to go along with a dominant rushing attack.

Proche is not very efficient because he does not produce much after the catch. He certainly has a moderate to high floor as a wide receiver, but his ceiling is limited because of his athletic abilities. In order for Proche to become a household name, he will need to develop into a top-end route-runner and follow in the small line of poor athletes at the position that win with other qualities.

Instant punt returner is James Proche’s new title in Baltimore. He has the surest hands on the roster with Duvernay right behind him. As a back end receiver on the team, Proche will have to make his money on special teams early on. By taking the starting punt returner role, Proche gives credibility and value to Eric DeCosta’s late round pick. Proche will provide depth to the wide receiver room and should see some limited snaps in offense in 2020. He could be the heir apparent to Willie Snead as the average athlete slot guy. Duvernay will have a larger role in year one than Proche, but James will still turn some heads in training camp with highlight reel snags.

Proche will most-likely see game snaps right away as the punt returner, but his role in the offense will be limited barring injury. Roman will be intrigued by Proche’s elite hands, but will have a hard time subbing him in during games. Proche will get some screen passes and short yardage reception opportunities, but his role should increase in his second season (with Snead likely moving on after 2020).