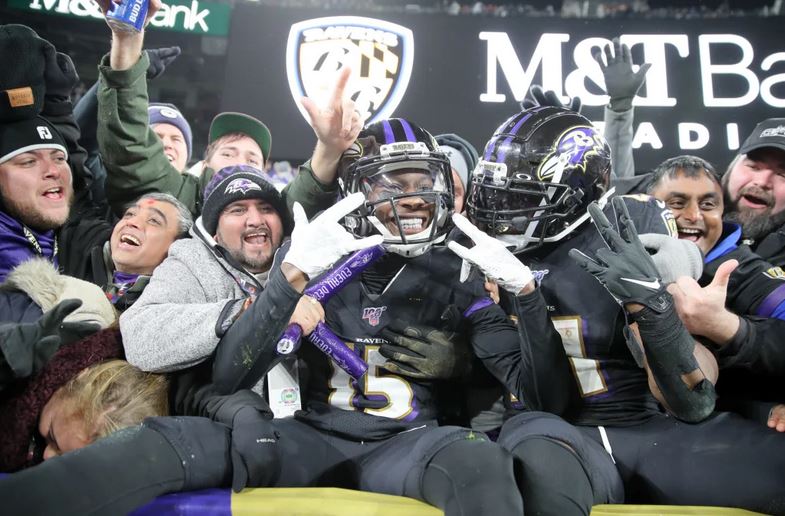 Hollywood Brown was a little perplexed about his teammates raving about his quickness.

He was never really running at full-speed because of offseason foot surgery. His production was just a glimpse of his capabilities. Brown predicted the Ravens are going to see a completely different player when he’s fully healthy.

The Ravens are already happy with his skills. He is just one part of a new wave of playmakers poised to keep the team in playoff contention for years to come.

“Marquise, who was really not 100-percent most of the year – and that was pretty obvious, right? And he’s a huge piece of what we’re doing and fits this offense so well,” Ravens coach John Harbaugh said.

General manager Eric DeCosta has added four wide receivers to the roster in the past two NFL drafts. In 2019, he grabbed Brown within 25th overall pick and Miles Boykin two rounds later. This year, DeCosta selected Devin Duvernay in the third round and James Proche in the sixth round.

DeCosta said when he took over as general manager the Ravens needed to “take more swings” at wide receivers in the NFL draft. He’s confident the Ravens’ fortunes are changing at that position and the team has given quarterback Lamar Jackson some game-changing weapons.

“Lamar is going to love both [Duvernay and Proche],” DeCosta said. “And also, we’re developing the guys we have; Miles Boykin and Jaleel Scott are working extremely hard to get better. Those are two big receivers, ‘outside receivers,’ who can go up and get the ball.

“Willie Snead is going to be Willie Snead. I’m just excited about our weapons on offense. We have speed, tough guys, very determined guys, and we’re trying to build something as explosive as we possibly can.“

The Ravens have whiffed on some draft picks at wide receiver, most notably with Travis Taylor (2000), Mark Clayton (2005), and Breshad Perriman (2015). The team has learned from those mistakes and has developed new strategies in scouting potential players.

“The first thing you look for, and I think we’ve learned it over the years, is you’ve got to catch the ball. You’ve got to have good hands and you’ve got to be able to catch the ball,” Ravens director of Player Personnel Joe Hortiz said after this year’s draft. “Then the other thing is the feel and the awareness. One thing for wide receivers that is probably the biggest challenge is the mental aspect of the game because again, you’re getting a lot more coverage thrown at you, a lot more defensive concepts and it’s happening much faster. So, they’ve got to be able to process that fast.”

The running attack will still be the focal point of the Ravens offense after setting the league’s single-season rushing record last year. Baltimore has all three running backs — Mark Ingram, Gus Edwards, and Justice Hill — from 2019 back on this year’s roster and added J.K. Dobbins in the second round of this year’s draft.

The Ravens ran the ball 596 times in 2019, 98 more carries than the San Francisco 49ers who were ranked second. Jackson finished with 1,206 yards rushing — sixth-best in the league and the most in a season by a quarterback in NFL history.

Conversely, Jackson attempted 401 passes in 2019, which ranked 26th among all quarterbacks. The hope is that he runs the ball less to avoid any potential injuries. At age 23, Jackson is not going to dramatically change his style of play, especially coming off a season when he was named NFL MVP.

“To be honest, it really doesn’t matter, as long as it’s going to help us win the game,” Jackson said. “But I doubt that I am going to be carrying the ball a lot going further into the future because we have dynamic running backs and even more receivers.”

His teammates feel something special brewing in Baltimore. The hope is the season starts on time amid the ongoing threat and upheaval surrounding the COVID-19 pandemic.