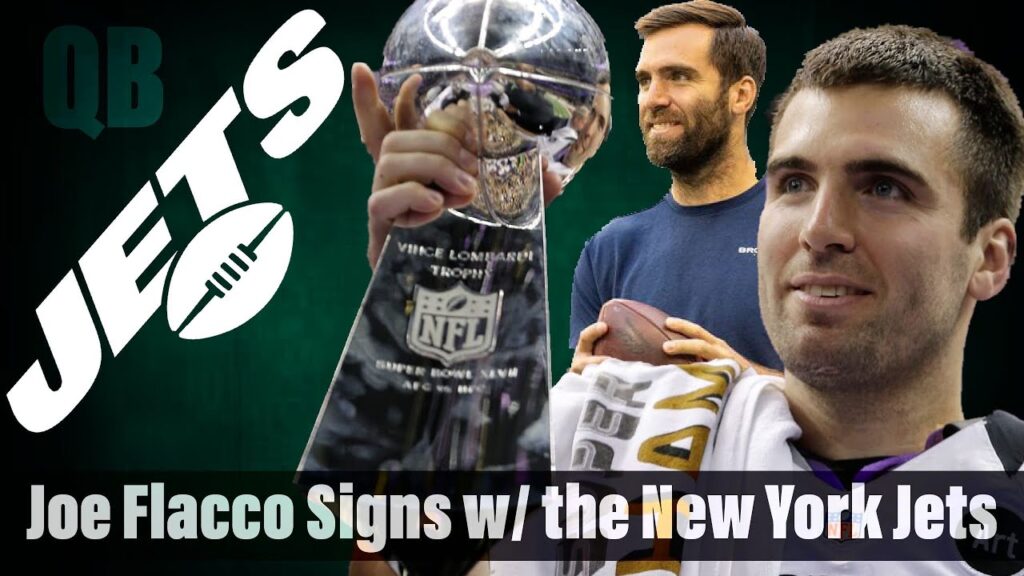 Joe Flacco to the Jets. I can’t say that I’m shocked, yet in a strange way I’m disappointed in Joe and his agent Joe Linta. I just think Joe squared could have done better. I tweeted as much earlier this week and it triggered many comments and DMs.

I don’t get the Joe Flacco to the #Jets at all. The common ties to the #Ravens aside, Joe is on record saying how miserable he was standing on the sidelines watching Lamar. I don’t see him as the mentoring type and for $1.5M? That’s chump change for Joe…C’mon man! pic.twitter.com/SnlY5kle57

During Joe’s introductory presser with the Denver media following the Ravens trading him to the Broncos in 2019, Joe, amongst other things, shared this:

“If I have to reflect back on that time in Baltimore it was not very fun. It was miserable sitting there on the bench and not being able to contribute and not really feeling like you’re a part of the team. But, if that is what it takes to be in this situation right now and be as excited as I am and my family is, then that is what it takes.”

That doesn’t sound like a guy who enjoys wearing an earpiece on the sidelines while a teammate tries to direct the offense towards the end zone. But that’s exactly where Joe will be on Sundays this fall at Met Life Stadium.

QB Sam Darnold was the Jets first-round pick in 2018 and the third overall. He is the de facto starter and Joe will only see the field if Darnold is injured. Then his 1-year, $1.5M deal could be worth as much as $4.5M. But for all intents and purposes, Joe will earn $1.5M if Darnold stays healthy. The former USC Trojan has started 26 games during his first two seasons.

So Flacco goes to the Jets where they have an entrenched starter and a volatile, arguably odd head coach in Adam Gase. The Jets are coming off a (7-9) season and haven’t been to the playoffs since 2010. Their offensive line was ranked 28th in the league by Pro Football Focus and 31st by Football Outsiders. Gang Green lists Breshad Perriman atop their depth chart at wide receiver and a disgruntled Le’Veon Bell at tailback, followed by 37-year old Frank Gore and Ravens castoff Kenneth Dixon. Former 6th round pick Ryan Griffin who has 170 catches in his 7-year career is their top tight end.

It’s a relatively bleak picture and Joe gets it all for just $1.5M?

Let’s not forget that Robert Griffin will earn $2M as the Ravens backup and Andy Dalton gets $3M guaranteed in Dallas with incentives that could push the deal to $7M to sit behind Dak Prescott.

Some have defended Joe’s decision by saying that it’s a way to stay in the league and East Rutherford is just 93 miles from his home in Audubon, New Jersey. So, there’s that.

But this is a guy who has earned $166M during his career and relatively speaking, he’s a frugal man. Why walk into the mess that is the Jets for NFL chump change just to stay in the league and work 90 minutes from home? And for those defending Joe’s choice by pointing to his experience and possibilities as a mentor for Darnold, please. Joe’s words and body language suggest that he’s as interested in being a mentor as Charlie Sheen is in being a guidance counselor.

And if being close to home is so important, then stay home! If staying in the league is so important, wait for a better opportunity. Injuries happen and teams in the thick of things just might want to have a player with Flacco’s postseason resume AND be willing to pay significantly more than $1.5M. Just 9 miles from Audubon is the home of the Philadelphia Eagles. Carson Wentz is regularly broken and it’s highly unlikely that rookie Jalen Hurts can assume signal calling duties for a playoff ready team.

At the end of the day, this just looks like a very lame, lazy money grab from Flacco’s agent and from a player who apparently only wants to eat home cooked meals.

And from a selfish perspective, this is not how I hoped to see Joe’s career wind down. Of course, that’s not my call or yours. It’s up to Joe and the Jets, where hopefully there will be no regrets.

But the optics tell a different tale.