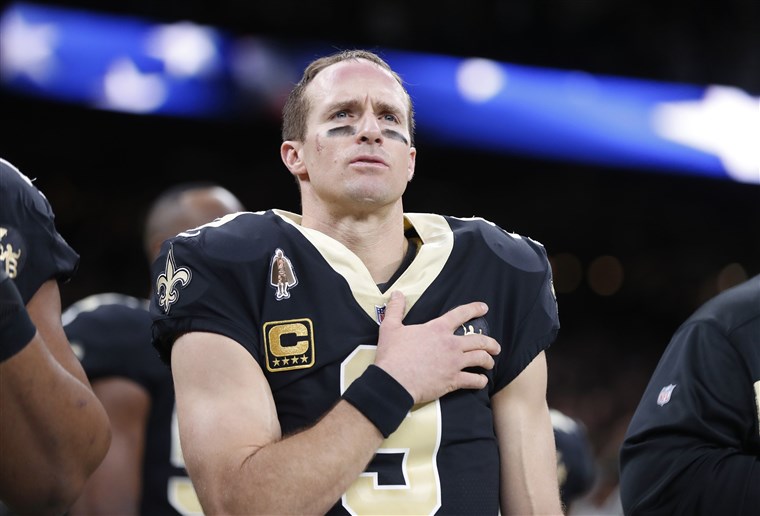 Throughout his career, Drew Brees has exemplified class and dignity in the NFL. He’s been a model citizen and he’s an outstanding human being. He’s a leader on and off the field and is the face of the New Orleans Saints.

Or at least he was.

I’ll get back to that in a moment.

In 2003, Drew, along with his wife Brittany, his high school sweetheart, founded the Brees Dream Foundation. Its initial purpose was to support cancer research but later it expanded into assistance programs on the heels of Hurricane Katrina. Later the foundation partnered with Operation Kids to rebuild academic and athletic facilities, parks, after-school activities and to establish mentoring programs for the intellectually disabled. He’s also been a benefactor for the Habitat for Humanity.

In 2005, not long after Hurricane Katrina left the city in shambles, Brees moved to The Crescent City and embraced the vibe and the culture of New Orleans. He sought to be more connected with the downtrodden community.

Brees has been on multiple USO tours throughout his career. In February 2008, Brees signed a promotional deal with Chili’s Grill & Bar to promote the chain’s new line of hamburgers to raise money for charity. Later in 2008, Brees participated in the Pro Sports Team Challenge, another charitable endeavor.

In June 2010, President Obama appointed Brees to be co-chair of the newly renamed President’s Council on Fitness, Sports and Nutrition. That October, Brees appeared in an It Gets Better video, in which he gave an anti-bullying message in the wake of a series of suicides committed by gay teenagers. Brees had a connection to bullying, having been a victim as a youngster due to the prominent birthmark on his face.

Brees’ NFL resume is filled with accomplishments that may never be eclipsed and he’s a sure-fire first-ballot Hall of Famer. But his NFL achievement isn’t isolated to the field of play. In 2006 he was named the Walter Payton Man of the Year, an award bestowed upon a player for his volunteer and charity work. In 2011 Brees was the recipient of The Athletes in Action/Bart Starr Award, given annually to an NFL player who best exemplifies outstanding character and leadership in the home, on the field, and in the community. In 2018 Brees received The Art Rooney Award in recognition of outstanding sportsmanship on the playing field.

I’ve never seen or heard ANYONE who had a problem with Drew Brees – until yesterday. During a virtual interview with Yahoo Finance, Brees was asked to share his thoughts on players kneeling again when the NFL season starts. Brees answered as follows (video and transcription):

Highlight: @readdanwrite asks @drewbrees what the star NFL quarterback thinks about “players kneeling again when the NFL season starts.”@drewbrees: “I will never agree with anybody disrespecting the flag of the United States of America or our country.”

“I will never agree with anybody disrespecting the flag of the United States of America or our country. Let me just tell what I see or what I feel when the national anthem is played and when I look at the flag of the United States. I envision my two grandfathers, who fought for this country during World War II, one in the Army and one in the Marine Corp. Both risking their lives to protect our country and to try to make our country and this world a better place. So every time I stand with my hand over my heart looking at that flag and singing the national anthem, that’s what I think about. And in many cases, that brings me to tears, thinking about all that has been sacrificed. Not just those in the military, but for that matter, those throughout the civil rights movements of the ‘60s, and all that has been endured by so many people up until this point. And is everything right with our country right now? No, it is not. We still have a long way to go. But I think what you do by standing there and showing respect to the flag with your hand over your heart, is it shows unity. It shows that we are all in this together, we can all do better and that we are all part of the solution.”

“[The Brees statement] is a classic example that no matter how many good things you do, no matter how much money you give, it doesn’t change what’s inside you, it doesn’t change what’s in your heart. And if you understand what Colin Kaepernick was kneeling for, you understand the message he was trying to get across. And Drew Brees is making this selfish talking about his grandparents.”

Brees was shredded on social media and people in the streets of New Orleans, a city to which he probably contributed more than all of the protesters combined, engaged in repeated chants of “F—k Drew Brees!”

Obviously Brees attempts to express his sincerity and respect to the weight of the situation missed its mark. Now this exemplary man is being chastised as a villain. Instead of the face of a franchise he’s innocently become the face of divisiveness in racial tension across the country.

“I would like to apologize to my friends, teammates, the City of New Orleans, the black community, NFL community and anyone I hurt with my comments yesterday. In speaking with some of you, it breaks my heart to know the pain I have caused. In an attempt to talk about respect, unity, and solidarity centered around the American flag and the national anthem, I made comments that were insensitive and completely missed the mark on the issues we are facing right now as a country. They lacked awareness and any type of compassion or empathy. Instead, those words have become divisive and hurtful and have misled people into believing that somehow I am an enemy. This could not be further from the truth, and is not an accurate reflection of my heart or my character.”

Given his track record, everyone should accept Brees’ apology as sincere and heartfelt.

You know they say that things happen for reasons. Let’s flip this unfortunate incident with Brees and make it work for everyone. If an exemplary guy like Drew can make this mistake – one grounded in misunderstanding, so can anyone. We must do our best to see things through each other’s eyes and that’s done through knowledge and the willingness to understand – FROM ALL SIDES.

I’m reminded of this riveting courtroom scene from the movie, A Time to Kill. The message has spot on relevance to what we’re experiencing in our world today. Please, do yourself a favor and watch this clip in its entirety.

As I write this, and being a huge fan of The Beatles, these words literally just popped into my head:

Life is very short, and there’s no time
For fussing and fighting, my friend
I have always thought that it’s a crime
So, I will ask you once again

Together WE CAN work it out. Let’s strip down the violence and extracurriculars that take our collective eye off the real issues and together, seek solutions.

Let’s not allow Drew Brees’ mistake or more importantly, the loss of George Floyd to go in vain.

Together we may stand, but divided we WILL fall.