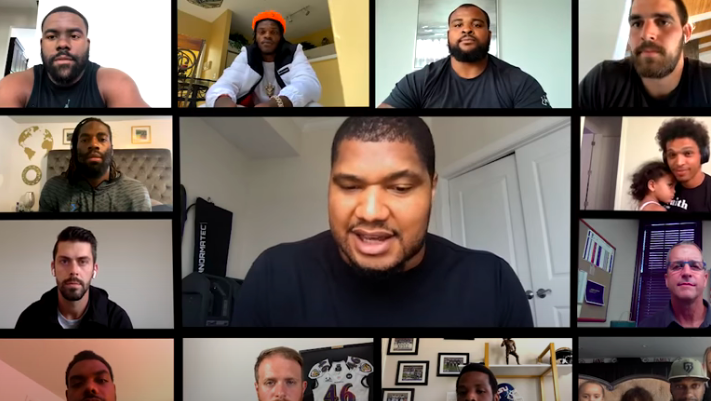 Larry Holmes talked about the impact of serving as Muhammad Ali’s sparring partner for five years.

The Navy Seal Commander, Mark McGinnis discussed how training is harder than the competition itself.

Julis “Dr. J’ Erving gave his perspective of being a professional athlete during the Civil Rights era.

These icons shared their recipes for success with the Ravens players in a recent team-generated Zoom series called “Chasing Greatness.”

Defensive coordinator Don Martindale lauded the potential impact of the speakers on his players.

“As an old high school teacher, I taught some boring subjects. So, I think you had to be creative,” Martindale said. “My challenge, and our challenge as a defensive staff, was I wanted to make it must-see Zoom meetings. As well as you guys are with everything that you do, you do get Zoom fatigue, but I wanted to make it where they couldn’t wait to come to the defensive meetings.”

The entire Chasing Greatness series consisted of speakers from a wide array of fields.

The Ravens players were able to ask questions with each of the speakers, who also talked about how their personal experiences are similar to challenges that arise in the NFL.

For example, Calipari talked about servant leadership, selflessness in pursuit of a common goal, and he challenged players to chase greatness. Rosburg talked about the standards of being a Raven. Howard told the players to ignore the depth chart. “Just become undeniable in what you want to do.”

Some of the messages were bigger than football.

Scott talked about the future of Baltimore and outlined ways that our players can help turn the city around. It was a key moment considering the recent movement toward social justice and racial equality.

As a former high school teacher, Martindale knows first-hand trying to keep people engaged during lessons. That was not a problem with the “Chasing Greatness” because the players were so engaged and the speakers were charismatic in delivering a powerful message.

These are challenging times around the world with the ongoing COVID-19 pandemic. The key is rising above the turmoil and finding success. The series also took some of the monotony of dealing with continuous virtual meetings, which has also been a product of the coronavirus.

“We wanted to make it an event,” Martindale said. “We wanted to build a champion mindset and getting our culture right because that was the most important goal that we had this offseason. I think we hit a home run with the speakers we had.”