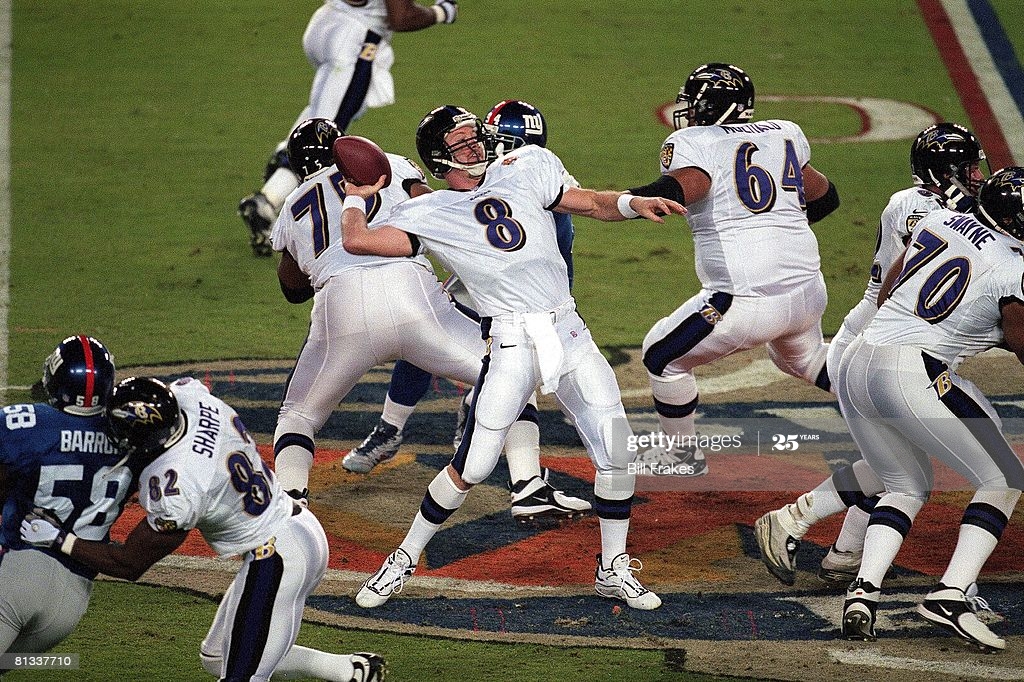 Last night I watched a replay of Super Bowl 35 on NFL Network as told by the great Kevin Harlan and analyst, Daryl “Moose” Johnston. It’s interesting how time can erase some of the nuances of a game that for all intents and purposes put the Baltimore Ravens on the NFL map.

Perhaps the game’s final score, 34-7, indelibly etched upon my brain, conveniently lured me into a slightly altered memory of that contest. I know that Trent Dilfer didn’t exactly set the world on fire in Tampa on that unforgettable January 28, 2001 eve, but I must admit that his level of ineptitude escaped my recollection of that game. Maybe I was spellbound from the dazzling confetti that fell from the sky above Raymond James Stadium that night.

But last night’s replay told a different tale and corrected flaws in my recall that were dusted away by the game’s outcome.

Dilfer’s stat line in Super Bowl 35 reads: 12 of 25 for 153 yards, 1 TD, 0 INT and a passer rating of 80.9. This average performance is how Trent’s Super Bowl efforts will be remembered in history.

What the stats won’t tell you is how he bounced a swing pass to Jamal Lewis that would have left the physically imposing back one-on-one with a corner, the only obstacle between Lewis and the end zone. They won’t tell you that Dilfer short-armed several passes to wide open receivers, forcing punter Kyle Richardson back onto the field. The stats erase two errant throws to a wide-open Patrick Johnson – both easy touchdowns. And lastly, the stats wipe out a pick-six courtesy of the Ravens QB to Giants’ LB Jessie Armstead, thanks to a phantom defensive holding call on Keith Hamilton. That apparent TD may have completely changed the game’s momentum.

For those of you who study revisionist history and believe that the Ravens would have won back-to-back Super Bowls if they had brought Dilfer back to try and repeat, you should probably watch this replay. You will walk away thinking otherwise. 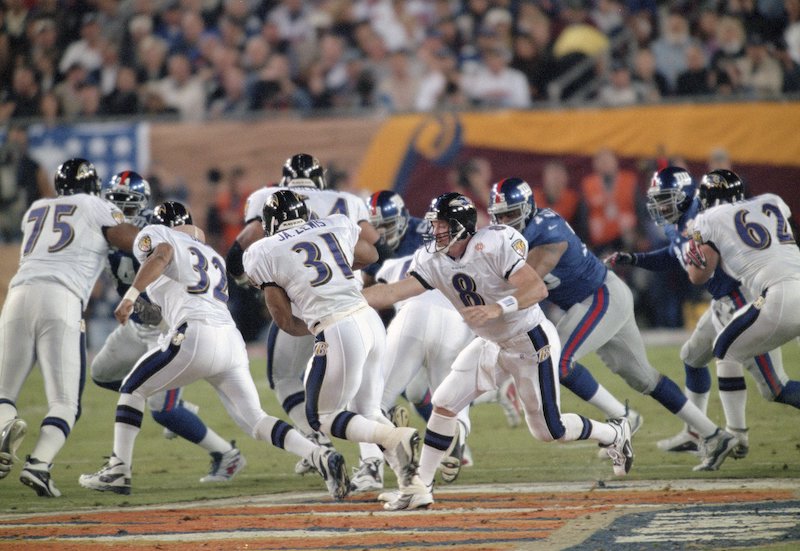 Jamal was such a beast. He took a pounding from a Giants front seven that played really well. But in the end, it was No. 31 who delivered the pounding, finishing with 102 yards on 27 carries…Lewis fumbled into the end zone just after breaking the plane of the goal line. It was ruled a touchdown on the field and after review, the call was upheld. There was no visual evidence to overturn the call. But even if it was ruled a fumble, Qadry Ismail made the recovery standing in the end zone with the ball and both feet in bounds.

Brandon Stokley who scored the game’s first touchdown, was such an underutilized weapon. He had 3 catches for 52 yards, exhibiting great hands. With better play at quarterback, he might have been remembered differently in Baltimore…Johnson abused Jason Sehorn and it was clear that the Ravens wanted to target the CB. The Giants secondary was the weak link in that defense and it’s a game that Sehorn would like to forget. If not for Dilfer, the Giants corner would be remembered infamously.
Shannon Sharpe was a complete non-factor. The Giants defense rolled assets towards Sharpe to eliminate him as a weapon. Shannon didn’t help matters with two drops on 5 targets. He had 1 catch for 5 yards… 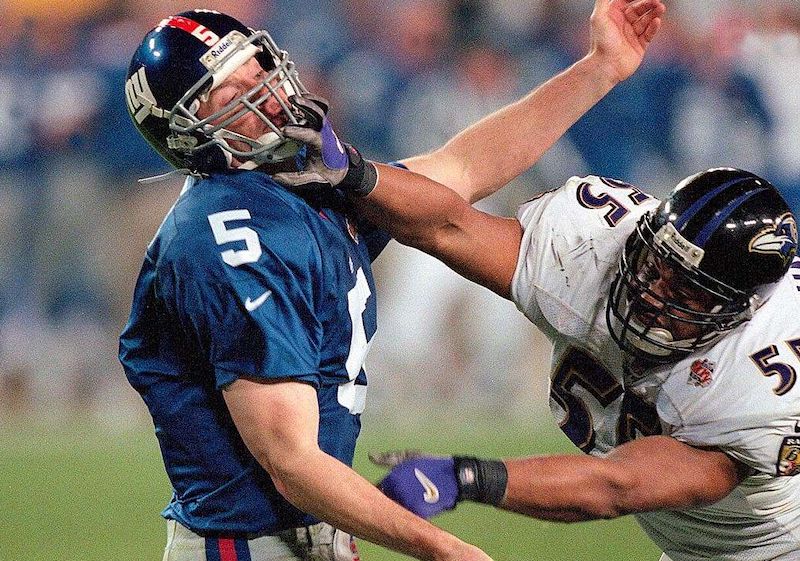 The Ravens defense consisted of extremely sound tacklers from top to bottom. Even reserve DB James Trapp contributed a few impressive takedowns…The Ravens had four interceptions but very easily could have had eight or nine. Kim Herring who tallied one, nearly had two additional picks; Ray Lewis should have had one; a tipped ball deep in Giants territory could have resulted in another and Duane Starks is probably still thinking about a second pick-six that could have been his during the Giants’ final possession.

Overall the game was extremely physical and when contrasted against Roger Goodell’s vision of the NFL, today’s game is closer to flag football than the one played during the 2000 season…This replay also reminded me of how chippy the game was. Skirmishes were regular throughout the contest. It seemed that the Ravens reputation as bullies somehow amped up the Giants’ aggression just to prove that they were as tough. They weren’t. But that didn’t stop Jessie Armstead from trying. At one point he ripped off Edwin Mulitalo’s helmet and poked at his face while both were on the ground.

O.J. Brigance was a dominant special teams player. He had four solo tackles and was very demonstrative while celebrating each of those takedowns…The Super Bowl 35 MVP was Ray Lewis but it could just as easily have gone to Jamie Sharper. Sharper had an interception and his presence in the middle of the field intimidated Giants receivers. Starks’ pick-six was enabled in part by Armani Toomer’s rounded slant route, influenced by the menacing Sharper.

But in the end, it was really the Ravens defense as a unit, that scored the victory. They limited the Giants to 152 total yards of offense; 2 of 14 on third down conversions; forced 11 punts (Brad Maynard is still icing down); and held Collins to a passer rating of 7.1 (not a misprint).

And in hindsight, it could have been a lot worse.