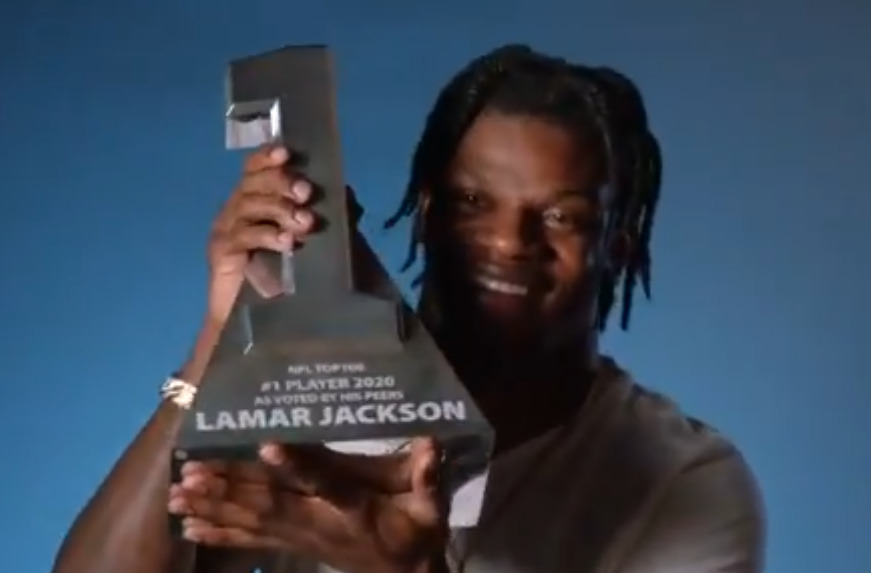 Yesterday we talked about the six Ravens named between 41-100 on NFL Network’s Top 100 list. For those watching tonight, there was quite a wait until the next Raven was named.

But, when he was, it was well worth that wait.

Lamar Jackson made his debut on the Top 100 list at #1, also becoming the youngest player to claim the throne.

The youngest player ever to be named #1.

Listening to Lamar’s peers (who, remember, vote on this list) talk about him is a treat. You can tell they are nearly as in awe of him as we are as fans.

A sampling from the video above:

“Did you not see what he was doing? He made pro football look like high school highlights.” – Ezekiel Elliott

“That man is a cheat code.” – Courtland Sutton

“He was just fun to watch.” – Thomas Davis

“That spin [against Cincinnati…the run…you know the one] was perfect, the ball was tight…like you’re playing Madden, you press the O button you spin, keep going, it was amazing.” – Patrick Peterson

And the quote that should make every Ravens fan happiest, from the man himself:

“I’m gonna always have a chip [on my shoulder]…until I get me a ‘chip.”

Even the biggest Jackson supporters on draft night 2018 couldn’t have possibly seen this coming. Not this quickly. The best player in the NFL, according to his peers? After his second season? His age 22 season? Just beyond any of our wildest dreams.