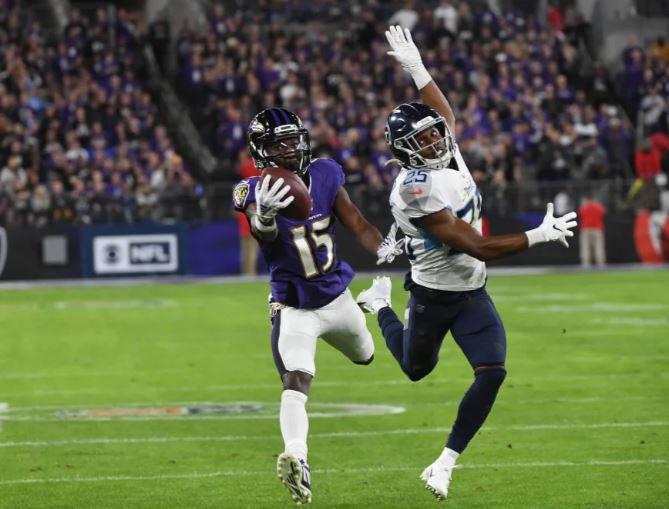 Hollywood Brown has undergone a complete transformation this offseason.

His ball skills have also considerably improved, judging from some of the videos he’s posted on social media.

Brown was never 100 percent last year after undergoing offseason foot surgery. His workouts were hampered and he was not able to run at full speed during the regular season.

Nonetheless, Brown was the Ravens’ top wide receiver, finishing with 46 receptions for 584 yards with seven touchdowns, which tied the franchise record for rookies.

“My mindset going in was, first off, to get healthy,” Brown said about his offseason work. “I just wanted to get back to my old self. Started off in the beginning of the year just working on my foot, getting my leg back right, my whole left side of my body. And then, ramping up into May and June, I started moving around, doing routes, cutting.

“Then June and July, I started back working on my speed. I just took the time out to address every part of my body, just to make sure I was going into the year right.”

The Ravens have taken notice of his hard work this offseason. The betting news on Hollywood is all good!

Steve Saunders, the team’s head strength and conditioning coach, was impressed by how Brown took the personal responsibility to get into such solid shape. Saunders said Brown has improved all of his habits to get fully ready for the season.

The restrictions with the ongoing COVID-19 pandemic did not slow him down.

“It must’ve just clicked for him this offseason, really, to get healthy, to start eating right, to start training harder,” Saunders said. “And last year, he dealt with some things and it was his rookie year. He got through it, but I give him so much credit for, really, using this time – as well as all the other guys. It would’ve been really easy to sit on the sofa the past four months and do nothing, and I think we can all ask ourselves that, ‘Have we really utilized the past four months of this pandemic time?’

“I think to ‘Hollywood’s’ credit, he got after it; he got after it a couple of hours a day. I saw him in the hall and I’m excited to take where he’s at now and keep building on that, just like the other guys, and keep going.”

Brown should provide quarterback Lamar Jackson with a dangerous downfield target. Brown has the ability to get behind a secondary and teams could pay a price if they attempt one-on-one coverage with him.

Jackson expects Brown to make huge strides going into his second year in the NFL.

“I feel like he is going to have a huge jump – more than people may think. He was hurt last year. People didn’t know that. But he went out there and battled his tail off each and every game on a messed-up foot.

“And now his full potential is going to show this year, I feel. He’s still young, but he is going to show off. And my job is to get the ball out quicker because he’s a lot faster with that foot at 100 percent.”