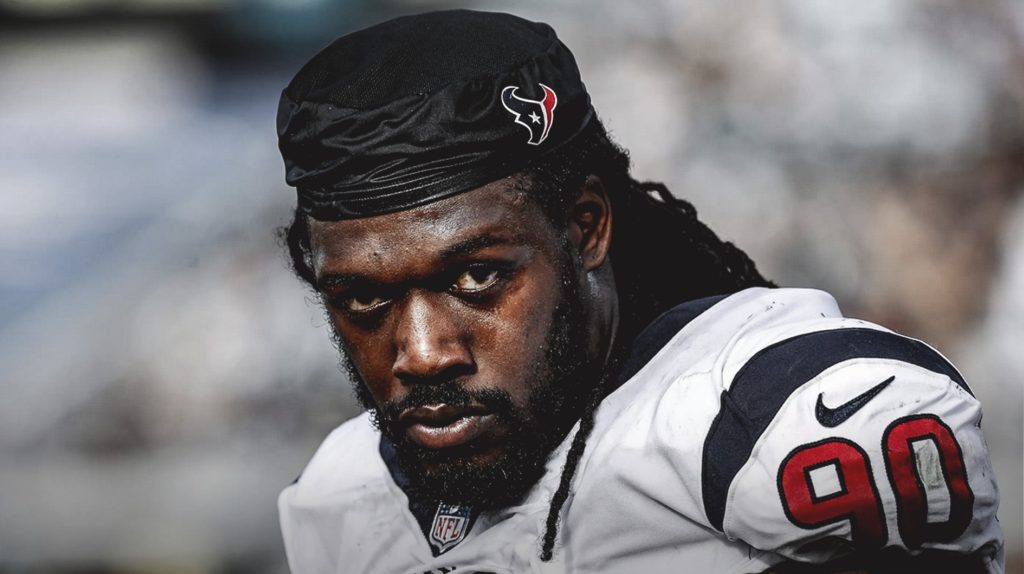 Within the past week, we’ve seen Yannick Ngakoue traded to the Vikings, and Logan Ryan sign with the Giants.

With those moves, the last man standing in the “Ravens need to sign him!” fan club is Jadeveon Clowney.

In the case of Clowney, there appears to be some smoke based on recent tweets from national NFL reporters. While the Ravens don’t appear to be in the lead per these sources, they seem to be in the mix. As we’ve learned from the Le’Veon Bell situation last year, it’s hard to say how much of this is verifiable information, and how much is agent-speak trying to generate a bidding war, with the Ravens smack dab in the middle.

Regardless, the potential for Clowney-to-Baltimore has Ravens fans hoping to see Eric DeCosta pull another chess move and take an already stout defense to the next level.

While the prospect of a high-motor wrecking ball in Clowney is surely worthy of excitement, I don’t think the Ravens should even consider pulling that trigger.

Let’s start with a simple concept: Clowney won’t come cheap, and he’s not a long-term play. After failing to generate a market early in free agency during this offseason, the one-time Texan and Seahawk has made it clear that he’s interested in a one-year, stopgap contract. The expectation, as I understand it, is to hit the market again in 2021 with hopes of generating more suitors with an eye on a more lucrative contract than he’d receive this year (although I’m sure that plan now looks bleak with the expected flat cap in 2021).

While Clowney has brushed aside the prospect of a long-term deal, he surely hasn’t succumbed to lowering his financial standards. The franchise tag at the position this year sits around $17.5M. When traded to the Seahawks last year, part of the deal was that Seattle would not tag Clowney, as he expected to take home a bigger pay day than the tag could offer.

Unfortunately for Jadeveon, that never came to fruition.

Rumors abound that Clowney has had offers from Seattle and Cleveland in that $17.5M ballpark, but he’s turned them down, allegedly hoping some team flush with cap space and a glaring need would come calling and meet his demands.

Again, that hadn’t come to fruition… at least until now, possibly.

With rumors that three teams are now pining for the South Carolina product to join their front seven, there’s a possible bidding war going on, although it’s hard to predict how high or low these bids are coming in. Personally, I doubt it’s north of that $17.5M range, but a $12M-15M seems about right.

So if Clowney is coming in under cost and short-term, why wouldn’t the Ravens play ball?

It’s all about the Benjamins (baby).

According to RSR Cap Guru Brian McFarland, the Ravens have just north of $7.8M to play with, based on the Rule of 51. Yes, there’s the additional $6M net that the Ravens cap would recognize from ousting Earl Thomas, but it’s still not enough to make Clowney fit on a one-year deal where every dollar has to count against the cap. Lest we forget, come Saturday at 4 pm, the Ravens need to account for the Practice Squad, as well as any players that go on IR, while staying under the cap. They also like to carry anywhere from $3-5M in emergency fund cap space for each season.

Barring Clowney signing for a team-friendly deal and disregarding the bidding war (wishful thinking), he simply won’t fit the 2020 budget.

Naturally, the next thought is to make cap space appear out of thin air. The Ravens can do so in a myriad of ways: signing Ronnie Stanley long-term, restructuring Marcus Peters, restructuring Brandon Williams, extending Calais Campbell, restructuring Nick Boyle… plenty of options to clear space.

But let’s look beyond 2020… what happens if the Ravens start kicking the can into future years on those deals?

Remember that flat cap? That’s not a conspiracy – it’s going to happen. With the NFL losing the revenue from fans in the stands (in most stadiums, and even those with fans are limited capacity), the loss will flatten the 2021 cap, and potentially 2022’s. Should the Ravens choose to move the money around on the aforementioned deals into future years, they’d in essence shrink the cap space in 2021 & 2022.

While in any other set of circumstances that wouldn’t be a big deal with the NFL showing cap growth annually, the flat cap compounds the issue. What would make matters worse is the amount of splashy deals the Ravens have coming up in the next two years, with Stanley expected to get top of the OT market money, followed by CB Marlon Humphrey, RT Orlando Brown Jr, and TE Mark Andrews all expecting top-5 deals for their respective positions. We could even throw Matt Judon in here (although his standing with Baltimore beyond 2020 remains to be seen).

I’m not suggesting moving money and signing Clowney makes every one of those deals impossible… but it very well could cause a hindrance in keeping all of them.

Is one year of Jadeveon Clowney worth losing one of the bookends and only consistent bodies on the Ravens offensive line? Is he worth losing Lamar Jackson’s favorite weapon? What about the player many Ravens fans deem to be the top corner on the team, and top-5 in the NFL?

Another thought here: the Ravens can carry cap space over into 2021. If the flat cap is a concern, wouldn’t carrying more space into 2021 be ideal for the franchise, versus breaking the bank in 2020 and putting themselves in a more financially bleak situation next year, all in the name of win-now?

Clowney would be fun. He makes the defense scarier. He could even push the Ravens that much closer to a third Super Bowl in 2020.

But the short-term juice ain’t worth the long-term squeeze.