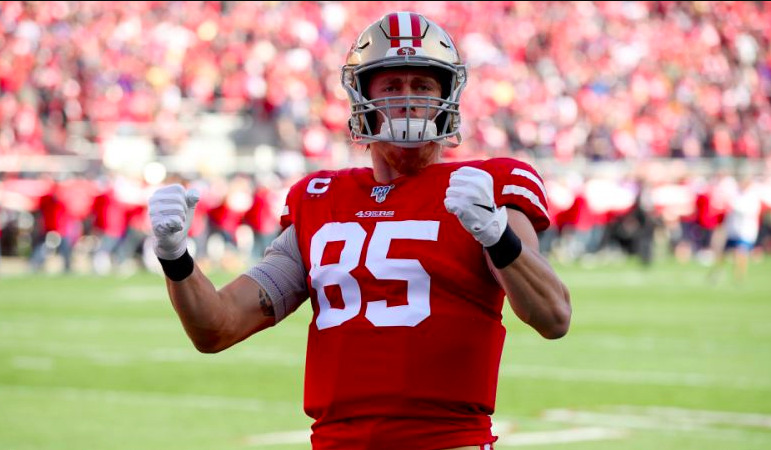 Welcome to another season of The King of DraftKings, where I continue my quest for the perfect DFS lineup. Away we go…

This game seems to be falling under the radar a bit in stacking convos but the potential for fireworks is evident. San Fran put up an impressive 853 total yards in two games versus Arizona last year. Jimmy Garoppolo acted as the counting stats engine in these games totaling 741 passing yards and eight passing TD’s.

The concern with the Niners passing game from a fantasy perspective is volume. Their defense ascended to impressive levels last year and Kyle Shanahan’s run game has as much equity as you’ll find in football. Those two factors usually don’t support shootouts but the Cardinals could make things interesting.

While Arizona didn’t quite match San Francisco’s gaudy totals in their two games last season, they were one of only five teams to put up more than 21 points (two times) on the 49ers defense. Now they add all-world receiver DeAndre Hopkins to a talented group of pass-catchers who will no doubt benefit from the attention that he commands.

I like the chances of this game environment being even friendlier than it was last season, allowing Jimmy G a chance at similar success

I’ve been salivating about this game since the minute we got the 2020 schedule…but not about Josh Jacobs. I loved (still do) Teddy Bridgewater’s opportunity to put up numbers versus this Raiders defense but as I started doing more in detail prep one thing shifted my focus…this Panthers defense was the only one in the NFL to allow over 2000 rushing yards to RBs last season. Their 27 rush TDs allowed to RBs was a whopping nine more than the NFL’s second-worst, the Jaguars. Tahir Whitehead and Derrick Brown figure to help them on early downs but this is a light unit still a bit short on talent.

Brandon Thorn, who does great line work to establish the run, has the Raiders as a top four offensive line unit. Las Vegas coming in and controlling this game on the ground is squarely in play which puts Jacobs in a great position to pile up 20 plus carries and goal-line opportunities.

His work in the receiving game has been debated all offseason and I’m content taking a near-zero there if it plays out that way but the trade of Lynn Bowden and release of Theo Riddick helps his cause, even if it’s just slightly. If the talk of a boost for Jacobs in the passing game by Jon Gruden wasn’t just lip service, we can consider it extra.

Coming back to Arizona/San Francisco with a play that many will shy away from. Operating on the opposite end of the run defense spectrum from Carolina, the 49ers gave up just seven rushing TDs to RBs all last year. As formidable as they were, this Kliff Kingsbury run scheme coupled with the gravity Kyler Murray has as a running threat makes the Cardinals run game pretty matchup-proof. Kenyan Drake averaged 5.7 yards per carry versus San Fran last season and his 11 targets in those games lend credence to his involvement even if the game gets completely away from them.

Drake’s touch projection is one of the safer on the slate, but the appearance of the matchup will drop him below the radar, making him a nice contrarian play and nice complement to what we’re doing with this lineup.

Speaking of correlation…if you couldn’t already tell, I really like this game. For as stellar as Richard Sherman was last season, the Niners started to show chinks in the armor opposite him at cornerback as the season progressed. San Francisco still has a top-tier pass rush but the trade of DeForest Buckner takes a bit of the sting out of the group.

Christian Kirk has become a bit of afterthought in fantasy circles after the addition of Hopkins but he begins the season in a pretty shape. Hopkins will demand attention that will free up Kirk for more advantageous looks and while DeAndre will need to build in-game chemistry with Murray, Kirk already has it. His 108 targets last year look promising for his growth but when you factor in that he had 31 in the first three games before a nagging ankle injury affected the rest of his season you see reason for even more optimism.

Hopkins will no doubt command his a large target share but with a team that plays as fast as Arizona does (3rd in the NFL in pace last season) and may be emboldened to play faster this year, I like Kirk’s chances to push for double-digit targets in this one if the game script plays in the way I’ve laid out.

This play is meh in a vacuum but will make a little more sense to you shortly. Steven Sims Jr. had 29 targets in the last three games of last season, operating as the only other viable option in the passing game for Washington. Fast forward to this season and things don’t seem to have changed too much. He’s completely supplanted Trey Quinn as the team’s full-time slot receiver and has reportedly gotten plenty of work on the outside opposite Terry McLaurin.

McLaurin will probably tangle with Darius Slay most snaps on Sunday, leaving Sims to run routes against an otherwise exploitable group of corners. Washington comes in as six-point underdogs, which also heightens Sims’ target opportunity. He’s a rock-solid play at his price and acts as a bit of a pivot from more popular players in this price range like DeSean Jackson and Hollywood Brown.

So if Josh Jacobs extends the trampling of the Panthers run defense into 2020, someone else has to benefit right? Recent beat writer buzz that Curtis Samuel hasn’t practiced well does give me a tiny bit of pause but his talent and opportunity are too much for me to turn away from here.

The Raiders have an unproven group of corners and surprise 1st round corner Damon Arnette is dealing with a fractured thumb. Whether it’s as a deep threat, schemed touches in space, or via direct handoffs, Samuel has multiple avenues to make big plays in this up-tempo Joe Brady scheme. If game script goes as I’ve laid out, he’ll have at a chance at volume to go with it.

Don’t worry; I got Jimmy G his stack partner. With so much value at tight end this year it also affords us another opportunity to be unique by spending up at the position. The statuses of Deebo Samuel and Brandon Aiyuk for Week 1 look up in the air. That’s a development that should result in a monstrous Week 1 target share for George Kittle. Then there is the stat-padding party that was the Cardinals 2019 tight end defense.

Due for positive TD regression this year, you couldn’t draw up a better spot for him…this may be the best one of the entire slate.

The motivation behind that Steven Sims play should be crystalizing for you now. Much like the Jacobs play, I like Miles Sanders’ opportunity to start fast in 2020. Washington added a special talent at #2 overall with Chase Young but I do not know if he alone can fully compensate for last year’s 24th ranked (by DVOA) run defense. Only the Panthers and Jaguars gave up more fantasy points to RBs in 2019.

This play doesn’t come without risk. Sanders is working through a hamstring injury that shouldn’t change his status for Sunday but could lead to a managed workload. At this price point with his three-down talent and explosiveness, I’m willing to take my chances.

The Jaguars seem willing to part with anything not nailed down in an attempt to “process” themselves into ALL the 2021 assets. It’s probably a wise strategy considering where they’ve fallen but for 2020, it’s going to be ugly. They face a top three offensive line on Sunday in the Colts and probably don’t stand much of a chance to stop the run (see above). A pretty likely game script here includes the Colts jumping ahead and plenty of drop backs for the Jags versus newly added game-wrecker DeForest Buckner and the Colts ascending defense.

Gardner Minshew showed a propensity to take sacks as a rookie. The hope here is that remains the case and he adds a turnover or two to the mix.