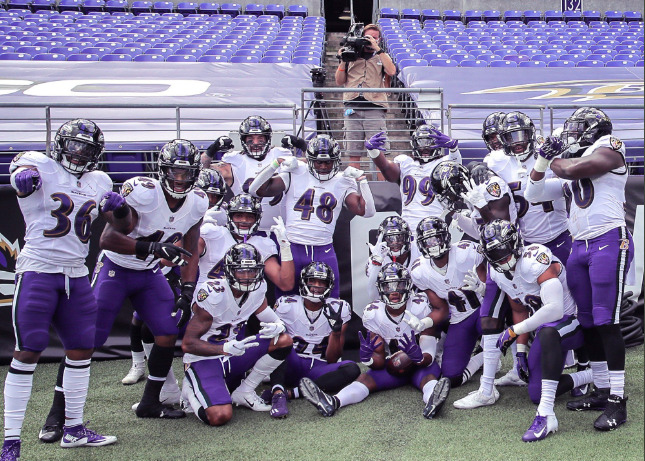 The Ravens picked up in 2020 right where they left off in 2019, dominating the Cleveland Browns in an offensive showcase, 38-6. RSR staff react to the win here…

What more is there to say about Lamar Jackson? The MVP looked the part today, at one point being 11/12 passing, with his only incompletion a throwaway on a pocket pressure. He didn’t have to do it with his legs, but showed that he still can when he feels like it. Hollywood Brown continues his ascension into the #1 receiver we all hope he can be, and Mark Andrews is as reliable as ever.

The one concern for me would be that, while the game was still close, the revamped defensive line/LB corps was less than impressive against both the run and the pass, allowing nearly 80 yards rushing in the first quarter-plus and letting Baker Mayfield sit comfortably in the pocket. Once the Ravens got ahead by several scores, these problems disappeared, as Cleveland’s offense became predictable. Not saying this will continue to be a problem by any means – just that it was glaring for about 18 minutes today. I still believe in Calais (who got his hands on several passes, one leading to an interception), Wolf, Queen (who forced a fumble), & Co.

— Lamar Jackson looks even better. He was poised, accurate, and seemed to have total control over the field. The reigning MVP is back and is certainly primed for another dominant season.

— This secondary is unreal. Browns receivers were smothered the entire game, with most damage coming from guys other than Beckham Jr. or Landry.

— It’s apparent how important special teams still are. Baltimore won the battle there and have one of the league’s most reliable groups. That’s huge.

— You could argue the Browns made the Ravens one-dimensional today, at least in terms of yardage. Would’ve like to see more from Mark Ingram, but it didn’t happen. That’s not a real concern, though; they’ll be able to run the ball.

— Most worrisome for me was the pass rush, or lack thereof. Matt Judon was a non-factor, and there were many times Baker had all day to throw.

Did y’all realize this was the team’s best KR game since 2018? Baltimore had no return above 26 yards all of 2019. Today came out the gate with 36-yarder. Way to go Devin Duvernay!

Lamar Jackson’s deep balls look new and improved. If THIS Lamar Jackson played against Tennessee last year, the Ravens might’ve won. Hollywood Brown is going to be a pro bowler this year. With no screw in his foot slowing him down, Brown will be tearing up secondaries all. Year. Long. Marlon Humphrey gets another All-Pro. I feel like this one is fairly obvious.

Lamar Jackson looks as good as he ever. He looked comfortable and smooth on his way to an almost perfect passer rating. Mark Andrews is going to make his case for a spot among the Top 3 TEs in the NFL and Hollywood Brown looks much improved after a full offseason to train and heal. The defense looks dangerous and like they should be, once again, a top 5 defense in the league.

This one looked almost too easy.

It was decisive opening performance from the Ravens. Lamar still looks like Lamar and Hollywood Brown looks destined to take a leap into upper echelon of young receivers in the NFL. Their defending of outside zone runs and pass rush still make me a bit uneasy but I saw nothing today that would make me think any differently of this team as it pertains to their Super Bowl hopes.

A lot to like about Week 1. In my bold predictions I said it would look a lot like last year’s home opener and my score prediction was 38-10.  Contributions on both sides of the ball by many different players including the rookies.  This was a continuation of the 2019 season and Lamar looked in peak form.

Loved what I saw from the Ravens offense, barring the Ricard fumble. Hearing Ronnie Stanley’s injury doesn’t appear serious is equally as important as the W today.

J.K. Dobbins impressed in his limited touches and I expect that role to continue to grow with every passing week.

Defensively, the pass rush remains a missing factor. Dialing up blitzes is the only way to generate pressure which, hey at least that works, but I hope we can find a way to get home with four men at some juncture. Outside runs also hurt the Ravens today in spurts, but overall a very bend-dont-break day by Wink’s unit.

Overall, a great opening performance to build off of for next week versus the Texans!