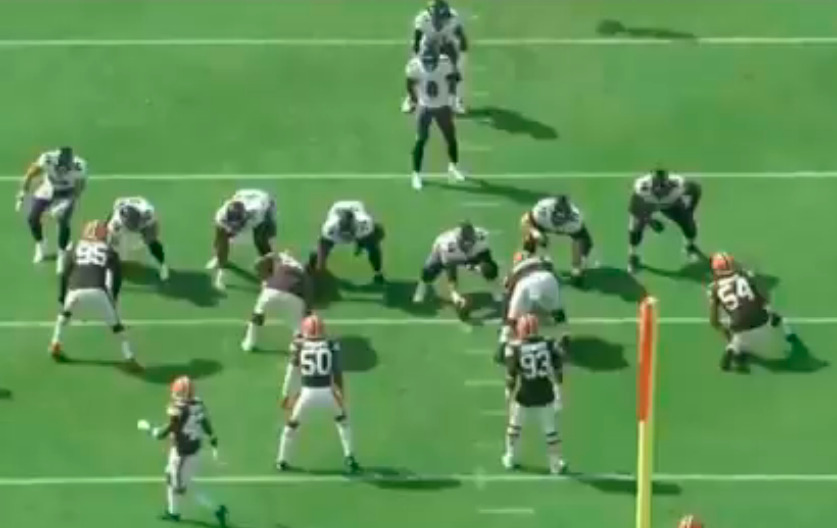 Welcome #RavensFlock to the first installment in the new Russell Street Report series, Film Don’t Lie. This is going to be a weekly breakdown of a variety of things. We’ll be taking a deep dive into the All-22 film to better understand various parts of the Ravens previous game.

Is there something you want to see? Reach out to me (@ColeJacksonRSR) on Twitter and I’ll get you a breakdown!

Today we’re going to take a look at rookie RG Tyre Phillips in his NFL debut. Rather than just explaining what we could see, we’re going to actually show you so you can see it for yourself because, well, Film Don’t Lie!

An Up and Down Day for Phillips

It was truly an up and down day for the young rookie out of Mississippi State, who is making his debut after converting from a college LT to RG. The conversion makes a ton of sense as most of his limitations as a college LT are minimized by moving inside. However, they don’t’ just disappear and that’s what we’re going to note. We’re going to look at both the run and pass game to show some of the highs and some of the lows and note how it may play out on Sunday against the Houston Texans.

Spotlighting Phillips in the Run Game

The term “athleticism” gets used in the scouting community with almost every single player. However, some of the limitations of such a broad term is it doesn’t account for different forms of athleticism. For example, Phillips was known as having slow feet in pass protection and thus was labeled “not athletic.” That doesn’t account for his athletic abilities as a pulling guard.

This is the Ravens’ second offensive play of the game. It’s a power to the left, which means Phillips’ responsibility is to pull through the left side C-gap behind Ronnie Stanley who is blocking down. Phillips’ job once he gets to the gap is to pick up the inside man that he reads and drive block him as the RB follows.

Phillips shows impressive mobility to get to that gap, but what stood out here is his ability to flex through his lower body and engage at the point of contact. FB Patrick Ricard gets to Phillips’ man and as a result Phillips peels off the left. However, the gap is clear and RB Mark Ingram hitches onto Ricard for a gain.

The key here is showing not just Phillips’ mobility, but also his awareness to work with Ricard (And TE Nick Boyle).

We’re back here with the same play concept. Phillips pulls through and finds #93 who is the first to arrive in the C gap.

Two breakdowns here stall the run: LG Bradley Bozeman failing to seal off the #96 (DT), and Boyle failing to kick #56 (WLB) out of the play. However, Phillips easily connects on his block and makes the right play.

This play is a bit of a mess as there’s a number of factors that lead to a poor outcome. We’re going to go through all of them and then focus in on Phillips.

The combination of 93 and 50 disrupting the play, forcing Ingram to hesitate, and #44 chasing down the RB after Ricard missed the block, resulted in a weak run play.

Mark Andrews tracks down #21 well and if Ingram is able to get through that gap he has a one-on-one with 39 to try and bounce it. It was a perfect storm, but we should note that Cleveland played this well. It’s the scrape and fill technique that the Browns have used to stop the option (you scrape the DE down the DL and fill with LBs). They used this heavily last year against the Ravens and the play made its return in 2020.

Focusing in on Phillips, what stood out the most was his awareness to work toward the playside shoulder of both LBs to try and execute his responsibility. It was ugly, but hey as long as it works, it’s okay.

Before we jump into this one, I will point out that the Browns have nine men in the box. So the deck was stacked against the Ravens from the jump.

As Phillips gets to the C gap he has two options: #93 and #56. Ingram is right on his butt and Phillips goes at #93 as Ingram follows.

However, when Phillips commits he ends up attacking the inside shoulder of #93, who makes the tackle as Ingram breaks.

This is a good example of where Phillips can improve. It’s a tough play because there’s two defenders for one pulling blocker (Phillips), but the key on these plays is to seal guys and open a running lane. You can’t attack the backside shoulder as Ingram is going to break it outside (he’s not going to break inside toward #50). This is a good learning opportunity and a reminder that no matter how athletic you are, you have to make the correct read.

Overextending in the run game

So far from Phillips, we’ve seen some good mobility, and an ability to run power to the left, but how about his drive blocking? Well, there we can see an area of focus for improvement.

This play is a basic zone concept. #65 (DT) is lined up as a 1T. Phillips’ first step in an inside zone left footwork is going to be his left foot to the inside and the play here is for him and Orlando Brown to deuce block #65.

However, the issue is that Phillips drops his head and gets his hands too far over his feet, leading to an overextension, as #65 easily swim moves him. Phillips has to get hands on him here in order for Brown to engage in the double team given that he began the rep in the A-gap.

This is going to be a common theme as we look where Phillips needs to improve. I cannot say it enough: hands need to be in line with feet or you will overextend.

We see the exact same thing here. This is power to the right and given that there is a 3T in the B-gap, the play here is for Brown and Phillips to deuce block #98 (DT). Phillips should be aiming for #98’s inside shoulder knowing that Brown will be attacking his outside shoulder.

Phillips shoots way too quickly and ends up whiffing. Now to his credit, if you’re going to end up on the ground, you may as well end up in between the ball carrier and the defender as #98 isn’t able to make a play on the ball.

However, it’s the backside OLB (#44) who comes across the formation to make the play. If properly executing and drive blocking, Ingram may not have to cut that back inside. Still, it appears to me that Ingram should have been cutting this outside between Brown and Boyle.

To give you an example of what it should look like, here’s a well executed power to the right where Brown and Phillips downblock:

They don’t deuce block because there’s a 4T lined up on Brown who he has to take care of and a 1T that is Phillips’ man, but you can see them clear off the line and keep that gap clean for Bozeman to pull through.

But can he pass block!?

Like I said, the theme here is going to be keeping those hands in line with his feet and you could find some similar overextensions in pass blocking.

This is one of the plays that stood out that really puts the issue in a vacuum. We saw him get hit with a spin move from #65 earlier…well, he allows the same thing from #98 here because of that overextension.

He needs to keep quick feet going to mirror the defender before firing his hands. If he fires his hands before his feet are mirrored, he exposes a rushing lane  – as he does here, and #98 capitalizes.

I won’t drag this point out. There are a few other examples of this issue and it’s going to have to be fixed moving forward.

Another thing that stood out is that the line needs to clean up some communication errors. Phillips is a rookie and they didn’t have a preseason, so this isn’t a surprise.

The Browns are running a stunt here. The OG and OT need to work together to pass off their blocks and take the appropriate steps to re-engage their ‘new’ defenders.

Sometimes teams use key words to ID a stunt coming, but neither look prepared and Lamar ends up under pressure.

The good news? We saw it get fixed later in the game where they did execute a pass off:

Well-executed handoff and Lamar shows incredible footwork. This is good to see because you can expect this from Houston this week as they’ll use J.J. Watt (who typically lines up over the RT) to run this concept and attack the Ravens’ newly formed right side.

This one is a ‘WTF’ moment. There’s a lot going on here. The left side of the line, including C Matt Skura, slide perform a slide protection to the left. However, Phillips takes a wide kick step as if he is looking at the blitzing nCB and it seems he’s expecting Skura to slide to his side and take #98. As a result, he completely oversets past #98 who basically runs free at Jackson, who thankfully has a drag route form Nick Boyle.

This was well summarized by @CasagrandeBrian:

It’s a 3-2 slide by the o line to Vernons side. Browns could’ve been tipped on where the slide was going so they sent a nickel inside and had the interior DL just step hard right. Sometimes it’s just a great play call for the defense. Really no fault on the oline here.

These are nitty gritty communication issues where it’s hard to make the correct analysis because we just don’t know what the line call is, but from what we can see it looks like a combination of an overset by Phillips and a bit of a communication error somewhere on the OL.

So we saw some highs and lows.

Let’s end on a high, in what I think is Tyre Phillips’ ceiling as a pass protector at RG:

Q4 14:20 (Phillips potential as a RG in pass pro – rough day for him but this is the ceiling) pic.twitter.com/vsM6qUY8Qu

These are quick chop steps as he kicks and post steps to mirror the DT. This is high-level stuff and it shows that in his first game he has that potential.

For a rookie making his NFL debut without a preseason, I came away pretty impressed. There’s some things highlighted that need to be worked on, but the positive thing is that it’s fixable with coaching and chemistry with his teammates.

On the athleticism topic, I think Tyre Phillips shows enough juice to be successful and I will continue to call him Kelechi Osemele Jr. because I really think that’s his ceiling.

Will he get there? Time will tell, but he has the potential, if he can put it all together.