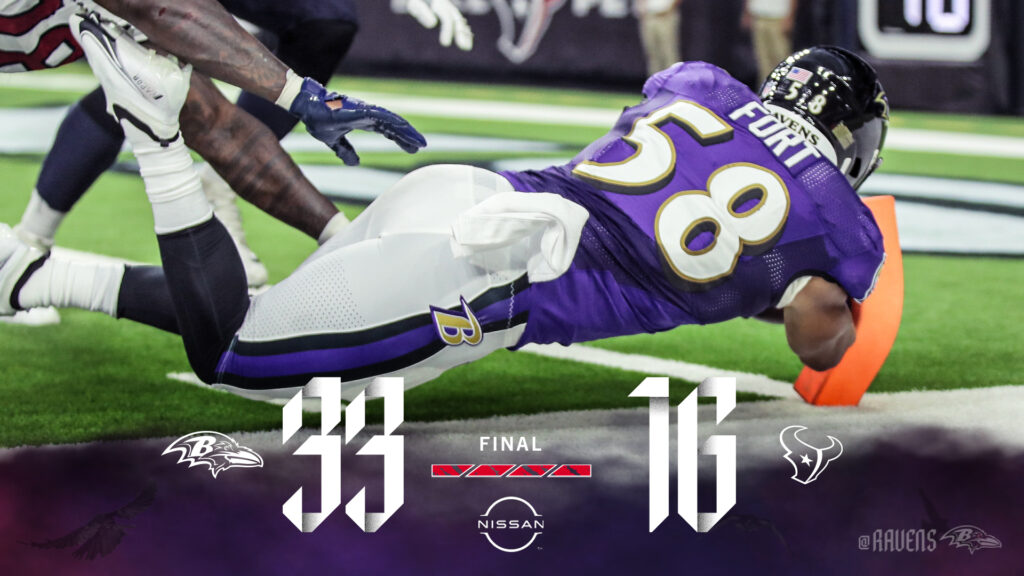 The Ravens didn’t play their best game yet they still managed to beat a 2019 playoff participant on the road in convincing fashion. The outcome of the game never seemed it doubt from the start as the Ravens put away the Texans in a way that was very reminiscent of the 41-7 drubbing at M&T Bank Stadium during Week 11 of the 2019 season.

The Ravens lifted their record to (2-0) on the season, their 14th straight regular season victory. The win sets the Ravens up for another Week 3 showdown against the (2-0) Chiefs in Baltimore. Last season in Kansas City the two (2-0) teams squared off in Week 3 with the Chiefs coming out on top, 33-28. What a shame that there will be no fans in attendance. It may have been an epic night in Charm City. But that’s 2020 for you. Let’s get to the Good, Bad & Ugly.

We’ve come to expect great performances from Lamar Jackson each week and for the most part he delivered again at NRG Stadium. Lamar was 18 of 24 for 204 yards and a TD toss to Pat Ricard, producing a 113.9 passer rating. He added another 54 yards on the ground but the Texans did a nice job containing him. Lamar averaged just 3.4 yards per carry. He missed an open Marquise Brown on an out in the end zone and he under-threw Mark Andrews on a one-on-one go route against Bernardrick McKinney route down the left sideline. McKinney’s back was to Lamar. A missed opportunity. Lamar distributed the ball well, hitting 9 different receivers. Houston had a solid game plan on defense. They sought to limit big plays, take away Mark Andrews and to win the edge when Lamar ran. They accomplished that. Give Lamar credit for not forcing the issue while staying patient. That’s a sign of his maturity.

The triple-headed monster of Ingram-Edwards-Dobbins produced 176 yards on the ground averaging 8.4 yards on 21 carries. They added another 35 yards in receiving. Gus Edwards was great inside the tackles producing 73 rugged yards when the Ravens really needed them…Pat Ricard made a nice grab on a slightly errant throw from Lamar at the 1 yard line for the game’s first TD. Ricard also had one of the key blocks on Mark Ingram’s 30 yard scamper for a score that proved to be a Texans’ back-breaker. He buried Houston’s active safety Justin Reid. Pat Mekari also provided a terrific seal block on McKinney to help spring the explosive play.

A momentum shifting play was contributed by Devin Duvernay at the 9:40 mark of the second quarter. Following a Texans touchdown and a solid special teams play, the Ravens took over at their own 21. On the very first play of the drive, Lamar rolled right and hit Duvernay for a 19 yard gain. The Ravens would go on to put up another 3 points during the drive.

Calais Campbell followed up an impressive Ravens debut against the Browns with another productive outing. He had 5 tackles, 2 for losses while adding a sack and 3 QB hits. CC along with Brandon Williams and Derek Wolfe controlled the space inside the tackles limiting David Johnson to just 34 yards on 11 carries. Overall the Ravens choked the Texans running game to the tune of 17 attempts, 51 yards, 3.0 YPC…Matt Judon doesn’t appear much in the box score but he was clearly a disrupter.

We’ve heard the Ravens players and coaching staff talk about the football intelligence of Marcus Peters. While watching DeShaun Watson’s eyes, Peters peeled off his man who ran a shallow out route. The play was designed in a way to give Watson a throwing lane. What Watson wasn’t counting on is Peters leaving his man to make the game’s best individual play for the interception…As a unit, Wink Martindale’s squad is very efficient at diagnosing and defending screens. The linemen read and then drop back which alters the way opposing QB’s have to make the throw. The slight delay in a QB’s throwing motion can disrupt the timing of the play. The DB’s do a nice job of racing up to make the tackle or destroying the integrity of the play design by taking out blockers…Speed kills and Patrick Queen and Malik Harrison both have it, particularly Queen. When their recognition skills improve, both will become dominant defenders.

Ravens won the all-important turnover battle 2-0 and T.O.P. was 34:51 to 25:09 in their favor…Big momentum shift between the 9:45 – 5:16 marks of the second quarter when the scored moved from 10-7 to 20-7…Nice adjustment from offensive coordinator Greg Roman in the second half to lean on more power sets while featuring Edwards. The design of the screen pass to Ingram was outstanding. On the 30-yard TD run, both Ronnie Stanley and Orlando Brown, Jr. were to the left of LG Bradley Bozeman as was back up center Mekari. The setup was perfect for the Ravens since the Texans overloaded the Ravens right side with defenders.

PROGRAMMING NOTE: Join us tonight on our Facebook Page, Ravens 247, for a live Zoom Podcast, Ravens Rap. Tonight Mike Bradley and I will review the game, we’ll be joined at 7:30 by WJZ’s Mark Viviano and in the final segment, 3 fans invited to the room will ask a question. If you want to be one of those fans, email us at TL@russellstreetreport.com. Here is last week’s show featuring Jeff Zrebiec.

The Ravens red zone offense wasn’t as sharp as usual and that needs to change when they host the Chiefs. They were just 1 for 3 in red zone attempts while another drive stalled at the Texans 21…Patrick Queen was well behind his man twice in coverage. Once on a wheel route down the left sideline that should have been a big play to David Johnson. Watson, despite adequate time to set and throw, over shot his mark. Watson did the same in the end zone when Queen was assigned to Johnson. This has to be cleaned up before taking on the Chiefs Clyde Edwards-Helaire who had 6 catches against the Chargers.

Losing Tavon Young is huge. His skill and presence give Wink a lot of flexibility. The Ravens will now be forced to adjust…Tyre Phillips looked rather awful. If D.J. Fluker isn’t better than the rookie at this stage of his career, why was he even signed?

So this is an illegal contact foul on Averett? C’mon man! pic.twitter.com/jQQxuCr42a

The illegal contact penalty called on Anthony Averett following Queen’s sack of Watson which would have set up a 2nd-and-21 at the Houston 34 with 25 seconds left in the half, morphed into a 1st-and-10 at midfield. Three plays later the Texans kicked a 44 yard FG to close the gap to 20-10. The call on Averett was ridiculous. 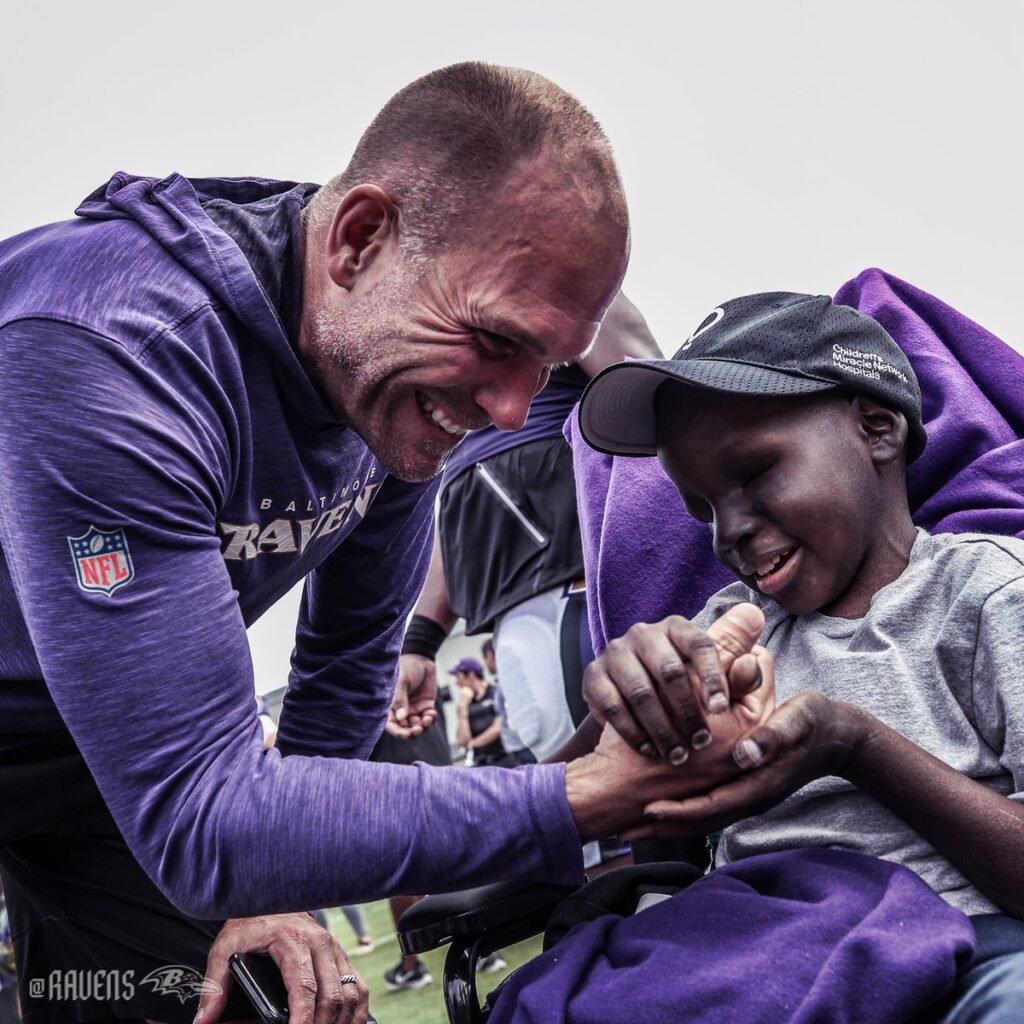 It’s hard not to give the award to Lamar Jackson. Each week he’s the best player on the field. But this week I’ll resist the urge. The game really lacked a flow and you could sense that in the first half the Ravens offense really wasn’t firing due to the inadequacies of the offensive line. They needed a lift and they got one from Marlon Humphrey.

Humphrey is a corner’s answer to T.J. Watt. In other words, he regularly punches at the football when possessed by an opponent and like Watt, it produces results.

The Ravens just took a 13-7 lead and Houston started the subsequent series from their own 17. On first down Watson while rolling right hit Keke Coutee for a 6-yard gain. But Marvelous Marvin Humphrey nailed Coutee with a right jab. The ball popped loose and L.J. Fort was Johnny-on-the-Spot, scooped up the ball on one bounce and while displaying tailback traits, rumbled 22 yards for the score, punctuated by an extended dive to the pylon.

Humphrey was smart and physical throughout while seamlessly taking over the responsibilities vacated by the injured Young. Humphrey is a complete football player and if the Ravens are ever confronted with the choice between signing him or Ronnie Stanley long-term, put me down for the marvelous one.