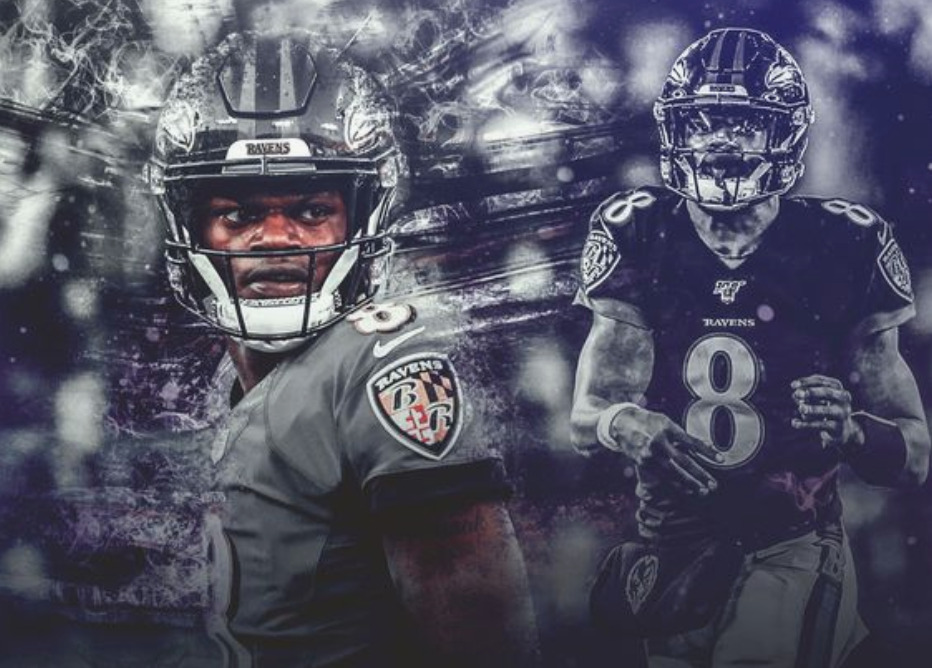 The Ravens have now won 14 consecutive regular season games, 13 with Lemarvelous Lamar Jackson at the helm. You may recall that he was held out of a meaningless, rain-soaked game against the Steelers to end the 2019 regular season. Well, meaningless to the Ravens. Bob the Third stepped in.

In the 13 games played by Lamar Jackson his stat line is as follows:

To put these 13 games in perspective, the highest passer rating of all-time during a 16 game period belongs to Aaron Rodgers who posted a 122.5 rating in 2011.

To put these rushing totals in perspective, during the same period of time Saquon Barkley has 826 yards rushing and 5 TD’s.

Darren Waller lived in a dark place for several years. But not many knew it. Maybe he didn’t want you to know. He’s slightly over 6’6” tall and runs a 4.46 forty. That alone should have made him a productive wide receiver at Georgia Tech University. But in three seasons as a Yellow Jacket, the Landover, Maryland native caught just 51 passes in 33 games. Yet the Ravens thought his measurables were worth the risk of the 204th pick of the 2015 NFL Draft.

They had heard about the off-field issues but the potential upside seemed worth such a small investment in draft capital. By the end of October of his rookie season, Waller was on IR. The following summer he was flagged for violating the league’s substance abuse policy. It cost him a four-game suspension.

He played in 12 games during his second season in Baltimore and looked like he could become a stud as a gunner. He caught just 10 passes for 85 yards and 2 scores. The next summer he was busted for substances again and it cost him the 2017 season.

The Ravens brought him back in 2018 then released him. Upon clearing waivers, he was re-signed to the practice squad where he stayed until he caught the attention of Jon Gruden when the Raiders visited Baltimore on November 25th. After seeing Waller during warmups, Gruden’s interest grew. The very next day Oakland signed Waller to their 53-man roster.

Waller worked to fix his issues with addiction. He stared the beast in the face and he won. Granted, addiction is an ongoing battle but you have to admire someone who has battled personal demons and come out on top. Today he’s generally considered to be among the top tight ends in the NFL.

Good for the Raiders for taking a chance. Good for Waller for making the most of it.

Lot of support for Darren Waller on the TL. Great to see a good guy overcome personal demons and get his life back on track. Props to Jon Gruden for recognizing and enabling the opportunity. Mad props to Waller for embracing the opportunity! #Winning pic.twitter.com/b8CmFwlXRm

There were many who took to Twitter during the Ravens win in Houston this past Sunday, to criticize Anthony Averett. Now granted, the former Alabama corner didn’t lock down Brandin Cooks or bat passes away, but it wasn’t as though Averett was awful or clueless or regularly out of position.

He’s the No. 5 CB on the depth chart and when he entered the game to defend the boundary, moving Marlon Humphrey to SCB, you knew immediately that the Texans would target him. So, while going up against good receivers with a premier quarterback and being thrown into a role unexpectedly, he gave up 46 yards on four receptions. A step of anticipation in the right direction on three of those throws, and maybe he forces a couple of incompletions. Averett tackled efficiently when called upon.

Is he starter quality in the NFL? Maybe not. Will he continue in the capacity he assumed in Houston? To be determined.

At this point I don’t think you will see the Ravens venture outside of the organization to land help in the secondary – not unless another Marcus Peters deal lands in the lap of GM Eric DeCosta.

So what will happen?

This could go in one of a couple ways. First, the Ravens move Jimmy Smith back to being a boundary defender, slide Humphrey inside and just like that, it’s 2019 all over again. For depth they could move S Nigel Warrior from the practice squad to the 53-man.

Or if the Ravens want to keep Jimmy in the hybrid role that he assumed for the game in Houston, the Ravens could opt to move Terrell Bonds or Khalil Dorsey from the PS to the 53 and let one of these 5’9” defenders assume slot corner responsibilities while keeping Humphrey on the boundary.

Whatever way they go, the Ravens are masters at managing their personnel and given the flexibility afforded by practice squads this season, they could opt to mix up any of the scenarios above depending on the strengths of a given opponent. And this week, I could easily see Jimmy Smith being assigned to Travis Kelce.

Speaking of this week, the thought of Patrick Mahomes to Tyreek Hill or Kelce, or the multi-dimensional Clyde Edwards-Helaire in space against the Ravens linebackers might frighten some of you. And it should be a concern. But not the biggest one. That belongs to the potential horror film of Chris Jones going up against Tyre Phillips. Greg Roman will need to come up with a plan to calm this gigantic mismatch down.

Otherwise, Jones could be a game-wrecker! See for yourself…

Chris Jones puts the RG on skates, forcing Herbert to scramble. Check out the collision b/t Herbert and 54 along the sideline. pic.twitter.com/kAcaFjBuMG