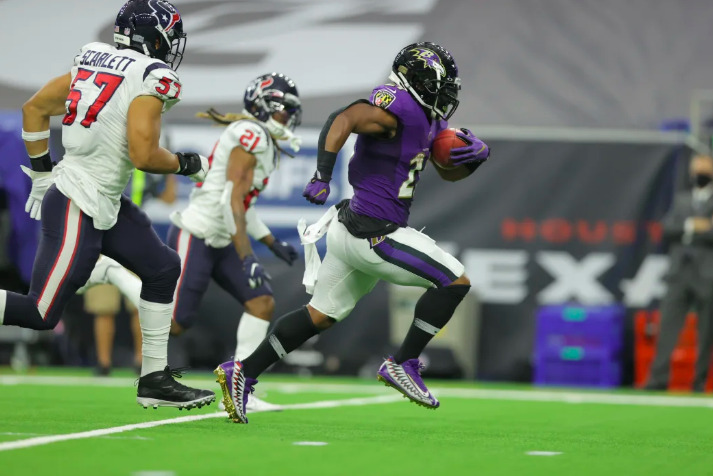 Critical plays occur all over the NFL gridiron each and every week.  These key plays happen on Special Teams, Offense, and Defense. Every week of the Ravens season we will take a deep dive into what plays were the game changers that week.

Andrews runs a 12-13 yard dig route and Lamar Jackson hits him in stride at the 24-yard line, then he turns upfield on the left sideline and runs to the Ravens 41-yard line. Boykin’s block on #21 was critical in getting Andrews yards after the catch. Snead runs an underneath route (kind of a drag) but stops in an opening. The defenders (#54 and #33) watch Snead underneath a bit too long, leaving Andrews to open up on the dig.

The play concept seems to be “levels” where two players on the same side of formation run the same core route, but one is in the 2nd level, and the other is shallow. Smart play call, and critical play to move the ball down the field on 3rd down.

The Ravens rush standard five (nothing simulated) on 4th and 1.

DeShon Elliott rushes really well from the LOLB spot on the five-man rush and almost gets to Deshaun Watson. The speed and hands in the way, pressures Watson, and Patrick Queen’s tight coverage on TE #87 leads to the incompletion and turnover on downs. Brandon Williams wins his rush against the RG #73 while the C pivots to the left side of the line right after the snap (doubling Calais Campbell with LG).

Great job by Elliott getting to Watson quickly and good job by Queen sticking with Daniel Fells in coverage.

Edwards makes a nice cut block to buy Lamar time to pass, while Ricard runs a quick out/flat route. He makes a diving catch and bounces up and rolls to get into the end zone.

Getting the first touchdown of the game helps swing the momentum for the Ravens.

Fells lines up as the RWR and runs a physical out/corner route for the Texans’ touchdown. Watson rolls out to the right and throws a dart at the big bodied Fells for the score. Anthony Levine played tight coverage on Fells, but the sheer size difference creates matchup problems. More teams will attack the Ravens with tight ends, because the top two cornerbacks are pro-bowlers and tight ends are matchup problems across the league.

Judon and Ward apply pressure to push Watson out of the pocket to the right. Marlon Humphrey defends #88 early in the rep, but passes him off to Chuck Clark, and pursues receiver #16 Coutee who catches the ball. Humphrey makes a patented peanut punch force fumble to knock the ball out, and L.J. Fort scoops and scores. Jimmy Smith makes a key block on David Johnson during Fort’s fumble return.

This game changing play, highlights Humphrey’s ability to make things happen around the football, and showcases re-signed inside linebacker Fort.

Marcus Peters covers Randall Cobb in motion from LCB to RCB, but he recognizes the route Watson is throwing to and leaves Cobb alone, making a diving interception from the sideline toward the middle area of the field. Watson targeted the speedy receiver Brandin Cooks, who gained push-off separation against Anthony Averett, but Peters made an unbelievable interception to give Baltimore the ball back.

Wink gets creative and brings six rushers on 1st and 10: (Fort, Tyus

Williams bench presses Texans’ LG #74 out of the way and gets to Watson in a hurry. Bowser and Ward also get to Watson to bat cleanup after Williams makes the play. Ward gets a “shot on goal” type hit on Watson at the end of the play, and the defense swarms to make sure Watson goes down.

Bowser has a decent rushing rep against Laremy Tunsil, but Watson runs into the pressure, making Bowser’s cleanup easy. The play-action motion by Texans on this first down could have been to their detriment because the defense had six rushers there ready. It’s worth noting that Cooks gains separation on a corner route against Peters, but the rush arrives before Watson can make the throw.

Nonetheless, getting a sack on 1st and 10 makes life easier for the defense.

Watson lines up in the shotgun with 2 WRs to his left, 1 RB in the backfield, 1 TE to the right, and 1 WR to the right.

Wink sends a four-man rush (Pernell McPhee, Clark, Judon, and Campbell). Judon performs a looping stunt from ILB-R (over LG), attacking the gap between the RT and the RG. The pressure created by Judon forces Watson out of the pocket to the left, and Bowser spies him rushing forward to create an errant throw. Humphrey is an elite cornerback, but his more natural position is boundary CB rather than nickel/slot CB. Cooks roasts Humphrey on the double move in/dig route, but Bowser and Judon force the incompletion to the open WR.

The incompletion leads to a field goal instead of a touchdown. Bend but don’t break defense wins games at times, and the Ravens tightened up in the red zone here.

Jackson runs play action to Dobbins, then throws a perfect dart to Snead on a quick slant. Snead does the rest of the work, pushing defenders and taking it to the Texans’ 37-yard line. J.J. Watt bit on the run fake, which helped Lamar get the pass off on schedule.

Watch for the Ravens to use more play action against K.C. to get aggressive players like Chris Jones and Frank Clark to over-pursue. Snead’s huge 22-yard gain gets the series rolling for Baltimore.

Greg Roman has fun making up plays and aligning all the guys he has active for offense. Nothing is more evident than the Ravens’ willingness to try out medieval football on 4th and 1. PFF and other groups that chart plays, have a good time charting the Ravens offense and defense.

Here, Ingram hits the hole to the left and the guys block it up nicely. Key blocks from Ricard, Boyle, Mekari, Stanley, Brown jr, etc. turn this 4th down conversion attempt into a house-call.

Elliott goes unblocked around the blindside edge and gets to Watson for his first career sack! The Ravens’ pass rush lacks in pure one-on-one winners, but defensive coordinator Wink Martindale knows how to turn up the heat with schemed pressure and with sending blitzes.

Martindale loves to use his versatile safeties and corners on blitzes, and it’s no secret that DBs are faster than DLs.

Wink uses a bit of schemed pressure by showing five rushers but only sending four: McPhee, Wolfe, Clark, and Campbell.

Judon drops into coverage on this play. Campbell absolutely shoves Howard back into Watson’s lap, and Clark also arrives at the quarterback quickly. The pressure is like a swarm, and Watson loses focus on his receivers (drag route by #12). The sack all but seals the game for Baltimore.

Roman uses motion pre-snap (and during the snap) about as well as any OC in the NFL. His play design is gorgeous and Dobbins is the benefactor on this 43-yard scamper. Duvernay, Boyle, and Lamar flow to the right, while the offensive line and the running back flow to the left. Dobbins takes this run to the outside left and cuts it back inside. He has special ability in space, and it shows on this long run.

Stanley, Skura and Snead make key blocks to get Dobbins going, and the rest is pure athletic ability. (Micahel Crawford points out the key blocks Skura makes on this play via twitter @abukari). I am very glad to have Dobbins in multiple fantasy leagues, but I am happier that he is in Baltimore for the foreseeable future.

Join us next week as we will continue to break down the key moments as the Baltimore Ravens take on the Super Bowl defending champions, the Kansas City Chiefs.