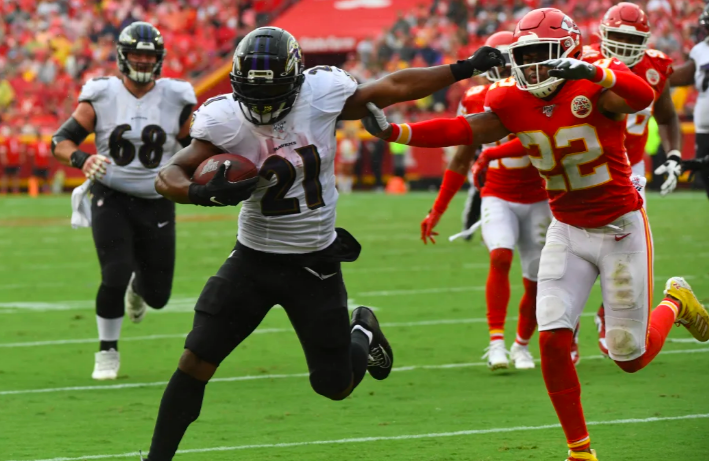 (Author’s note: Thanks to Michael Crawford for contributing to this week’s piece!)

In Kansas City’s Week 1 win over the Houston Texans, Texans RB David Johnson carried the ball 11 times for 77 yards and one touchdown, doing much of his damage between the tackles. In the Chiefs’ overtime win over the Chargers in Week 2, L.A. RB Austin Ekeler carried the ball 16 times for 93 yards. Ekeler had a few nice runs to the outside but, like Johnson in Week 1, was able to gash the Kansas City defense right up the middle. In the 4th quarter, the Chargers put together a long (10:21) drive that resulted in a field goal that gave them the lead with just over two minutes left in regulation.

Much of the talk of the Baltimore offense under Lamar Jackson in 2018 and 2019 centered around the Ravens’ ability to eat up enormous amounts of the clock on marches that often ended in seven points. They wore out defenses, kept dangerous offenses off the field and closed out many a game by putting the ball in the hands of Gus Edwards and Mark Ingram early and often. In the 4th quarter of Baltimore’s Week 2 win over the Texans, the Ravens proved that their power running game hasn’t lost a step. Edwards spelled Ingram in the backfield and led the way on a drive that consisted of 12 straight runs and ended in a field goal. On the next drive, J.K. Dobbins ripped off a 44-yard run that took the game to the two-minute warning.

Against the Chiefs on Monday Night Football, the Ravens need to run the ball early and often. Even though the Ravens have an incredible offense of their own, Kansas City has an offense that Baltimore simply does not want to get into a shootout with. If Jackson and company can put up some points and help their defensive teammates by keeping Patrick Mahomes on the bench as much as possible, the Ravens have an excellent chance to wake up on Tuesday morning with a “3” in the win column.

Get Dobbins Involved in the Passing Game

Through the first two weeks of the 2020 NFL season, Ravens running backs have not been heavily involved in the passing game. Ingram has hauled in two of his three targets for 22 yards. Rookie Dobbins, Ingram’s primary backup so far, caught his only target of the season in route to an impressive 13-yard gain. Edwards, who came in to close the game out against the Texans, has not yet been targeted in the passing game.

In their Week 2 contest, the Chargers used their RBs to do serious damage to the Chiefs through the air. On their first drive, backup RB Joshua Kelly caught a short pass and picked up 35 yards down the sideline. Later in the same drive, Ekeler gained 16 yards on a pass from rookie QB Justin Herbert. In total, Ekeler and Kelly combined for 104 receiving yards on six catches.

Film from the first two games of the 2020 season shows that Ravens running backs are getting open in the passing game. It’s possible that they haven’t been targeted frequently because they’re the last option in Jackson’s progression. It’s possible that the Ravens simply don’t prioritize the use of RBs in the passing game as much as teams like the Chiefs, Saints or Panthers.

Against the Chiefs on Monday night, the Ravens need to change that. At Ohio State, Dobbins proved that he was an asset as a pass catcher. With the Ravens in the offseason, Dobbins made catches that excited fans. He is a natural receiver with great speed who makes defenders miss in the open field. Getting Dobbins, along with the other RBs, involved as a pass catcher against the Chiefs should be a priority for Greg Roman and Jackson.

While the Ravens’ top two CBs were 2019 All-Pro selections, the Chiefs’ top two CBs are a much different story. L’Jarius Sneed was a 4th round selection in the 2020 NFL Draft. Sneed, a Louisiana Tech product, played CB for three seasons before transitioning to Free Safety for his senior season. Rashad Fenton was a 6th round in the 2019 draft. The South Carolina product played sparingly during his rookie season, but has been forced into the starting lineup as a result of suspensions and injuries to players above him on the depth chart.

Marquise “Hollywood” Brown is likely to draw help from extra defensive backs on Monday night. Mark Andrews, Jackson’s favorite target in Week 1, is likely to see coverage from Tyrann Mathieu and Chiefs’ linebackers over the middle of the field. Lamar needs to take advantage of the Chiefs’ young, inexperienced CBs.

Miles Boykin could be a big target of opportunity for Jackson. Boykin, a 3rd round pick in 2019, has all the size and speed that you could ask for in a stereotypical X WR. After an impressive training camp in which Boykin looked like he had taken a step forward after a mostly forgettable rookie season, Ravens fans are hoping that 2020 might be the season when Boykin breaks out. Against a below-average group of Kansas City CBs, Monday night could be the breakout game that starts the breakout season for Boykin. 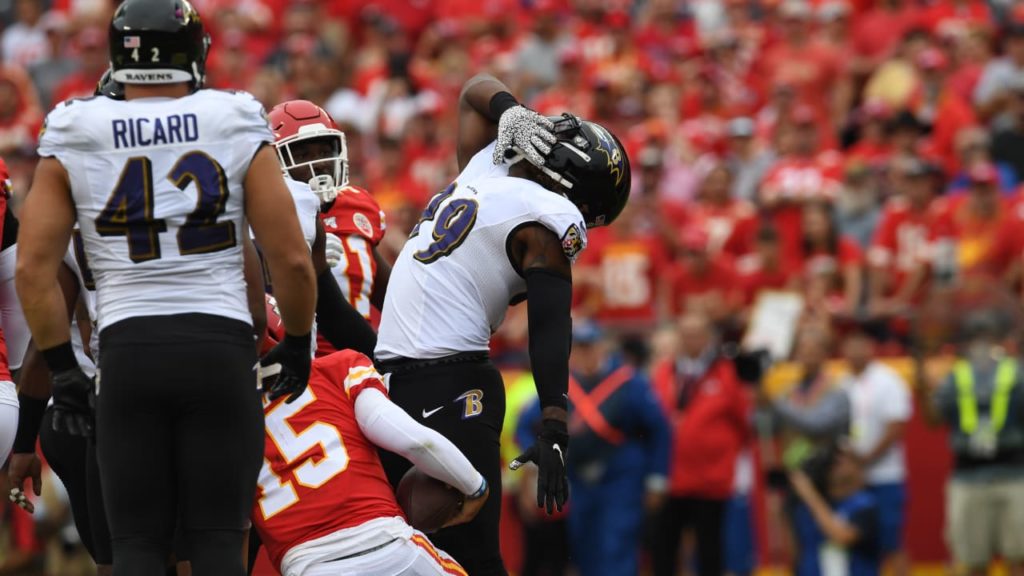 There is a well-known quote contributed to former SportsCenter host and current host of The Dan Patrick Show, Dan Patrick: “You can’t stop him, you can only hope to contain him.” Patrick’s catchphrase is the perfect way to describe the predicament that the Ravens will face on Monday night against Travis Kelce. Kelce, a two time all pro and five-time Pro Bowler, is one of the best Tight Ends in football today. He’s an excellent option in the passing game and gets the job done in the run game. Two weeks into the Chiefs’ 2020 campaign, Kelce has 15 receptions for 140 yards and two touchdowns. He is also one of just three players this season with at least five snaps as an inline TE, in the slot and split out wide. No matter the opponent, Kelce presents a matchup nightmare.

In the Week 1 edition of Battle Plans, I talked about using Jimmy Smith as a counter to TEs like Kelce. Smith’s great size and pedigree as a former number one CB make him one of the more ideal candidates to cover modern day TEs. I am not changing my stance. Against the Chiefs, Smith should get the bulk of the early opportunities to cover Kelce. With a player of Kelce’s caliber, though, man coverage is not enough. The Ravens should prepare to mix coverages frequently to make life harder for Kelce and Mahomes. Wink Martindale could assist Smith with a linebacker or give a safety like Chuck Clark some chances throughout the game. If the Ravens mix coverages and keep Kelce uncomfortable, they might just be able to contain him.

The season-ending injury that Tavon Young suffered in Week 2 is undoubtedly going to hurt the Ravens throughout the 2020 season. Unfortunately for the Ravens, there is no game in which Young’s injury will be felt more than this week against the Chiefs. First and foremost, the Ravens only had one week worth of game planning to make the changes necessary to compensate for losing Young. He was the Ravens’ top option in the slot and allowed the Ravens to keep their coverages basic. With Young in the slot, Marlon Humphrey and Marcus Peters were free to stay at their outside CB spots. There was no need to worry about anyone “traveling” with a team’s top WR or moving pieces around based on the opponent. With Young out, there is a chance that the Ravens will decide to slide Humphrey into the slot like they did in 2019.

The second reason that missing Young this week will hurt a little extra stems from who the Chiefs are as an offense. They thrive in “11 personnel” with one RB, one TE and three WRs on the field. Their tendency to spread it out means that the Ravens are likely to have to frequently rely heavily on Anthony Averett in Young’s absence. Mahomes will frequently target Averett, a third-year player out of Alabama, in coverage. With All-Pro CBs marking his other options, Mahomes would be silly not to at least try to pick on Averett.

The Ravens need to do what they can to protect Averett. Most of the time, he should be helped by bracket coverage or by safety help over the top. If the Ravens regularly leave Averett on an island against the likes of Tyreek Hill or Sammy Watkins, he could be in for a long night under the lights.

Get Physical with Hill

The Chiefs, like the Ravens, have one of the most intimidating offenses in the NFL. The reigning Super Bowl champions have the current face of the NFL at the helm of an offense that is loaded with dangerous weapons. WR Tyreek Hill is the scariest weapon of the bunch. Appropriately nicknamed “Cheetah,” Hill is perhaps one of the only players in the NFL who could beat Ravens’ WR Marquise “Hollywood” Brown in a foot race. Hill has made his mark on the NFL by making opposing defenders look like they’re moving in slow motion.

Hill is a danger to strike from anywhere on the field. Andy Reid and the Chiefs do their best to get the ball into Hill’s hands in a variety of ways. Hill is a frequent target of short passes and screens. He’s no stranger to getting the handoff on a jet sweep and could be used as a returner under special circumstances. As his rare speed would suggest, though, Hill is most dangerous on deep routes that call for him to get behind the defense.

One of the best ways to limit Hill is to get physical with him at the line of scrimmage. Getting hands on him as he tries to get off the line can be very effective in disrupting the timing of his routes and frustrating him as the game goes on. A big, physical CB like Marlon Humphrey is an excellent candidate for someone who can successfully jam Hill at the line. Having Humphrey, and other Ravens’ defensive backs, play physical against Hill is a great way for Baltimore to limit his big play ability.

Chris Jones is, without question, one the best defensive lineman in the NFL today. Kansas City’s 2nd round pick in the 2016 NFL Draft has spent the last four years putting himself solidly in the conversation for the title of second best, behind only Aaron Donald. He’s an athletic player who can be a game wrecker against both the run and the pass. During the 2020 offseason, the Chiefs used their franchise tag on Jones while they worked on a massive extension for the best player on their defense. Behind just Donald and Colts interior pass rusher DeForest Buckner, Jones became the third-highest paid defensive lineman in the NFL when he signed a four-year, $85 million deal with $60 million in guarantees.

Against the Ravens on Monday Night Football, Jones could frequently find himself lined up across from fellow Mississippi State alum Tyre Phillips. Phillips, the last pick in the 3rd round of the 2020 NFL Draft, won the starting RG job over veteran D.J. Fluker during training camp. Phillips has played admirably at a position that he never played in college, but he struggled at times against J.J. Watt in Week 2. As I mentioned above, the Ravens should be able to run the ball against the Chiefs on Monday night.

If Jones dominates Phillips though, it could be a different story.