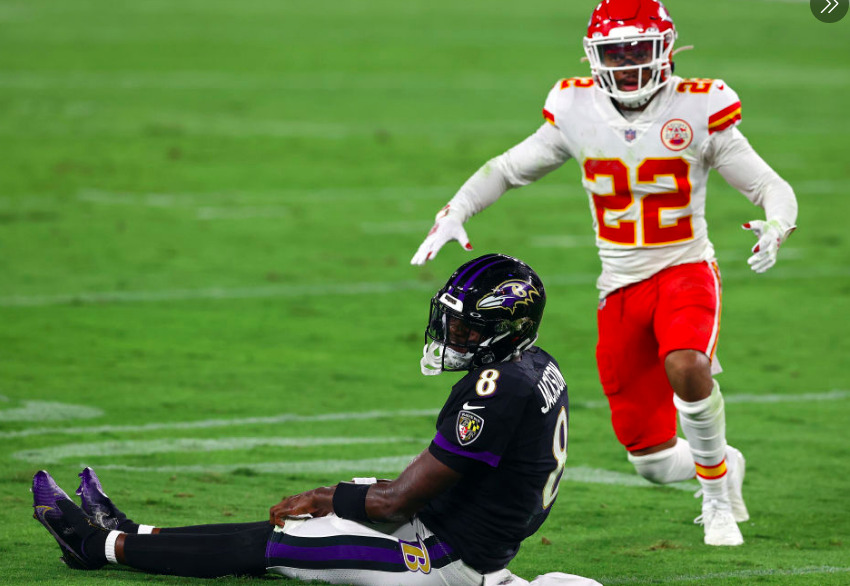 The Baltimore Ravens fell to the Kansas City Chiefs, 34-20, in Week 3 of the 2020 NFL season. Russell Street Report staff react to the loss here…

It’s nice to think that, with a full M&T Bank Stadium crowd, things might have been different. But there’s no getting around the fact that, without a Devin Duvernay kick return TD, this is a 34-13 shellacking by the Chiefs, the Ravens’ main competition for the AFC crown. Throw in a couple missed kicks by Harrison Butker, and it could have just as easily been 38-13.

Greg Roman and Wink Martindale both got their lunches eaten, by Steve Spagnuolo and Andy Reid, respectively. Reid emptied the playbook, and Wink had nothing for him. It looked like a team that had just won the Super Bowl against one that has dreams…and nothing more. The Chiefs looked like a team ready to defend their crown. The Ravens looked like a team full of pretenders. Dropped passes, blown coverages, missed blocks, and yes, even bad reads and poor throws by Lamar Jackson – just bad all around.

Hopefully they can take this lesson as a reminder of the fact that they aren’t near where they want to be and build toward that goal. Because that was a sad effort on both sides of the football.

Somebody just throw Matt Judon in the trash! His agent better not call for two months after the season is over.

I thought Baltimore was a run first offense? Why go away from a gameplan that was clearly working?

Mark Ingram is no longer the lead back.  Let Gus cook!

Embarrassing and frustrating.  I hardly recognized the team. They looked lost from the start. The pressure got to them and the Mahomes monkey will not be off their backs yet.

It’s still early but this team is to be known as one that crumbles under pressure, until they can prove otherwise.

I am convinced that if the Ravens don’t completely abandon the run they at least have a shot to win this game. Baltimore got outclassed on all levels, and it’s not the first time that’s happened in a massive game. Consistently getting off to slow starts in these sort of matchups is unacceptable, and it’s really becoming a trend.

— Matt Judon is being deployed like he’s Aaron Donald (which he’s not). The only time he generates pressure is coming off the edge. Keep him there.

— I’m fine losing due to pure execution. The amount of mental lapses and miscommunication on defense, paired with the drops on offense, are infuriating.

— The loss isn’t entirely on Lamar, and to be honest I think it’s much more on Greg Roman, but he missed some big plays that could have jumpstarted the Ravens in this game. No matter how you slice it, throwing for under 100 yards is not good enough. He looked frantic and out of control the majority of the game.

— Nobody is stopping the Chiefs when they’re clicking. Andy Reid and Eric Bieniemy are offensive wizards, and that’s an understatement.

— If you can’t tell, this loss hurt. But we’re 2-1 and it’s onto The Football Team. No need to panic in September.

“An absolute embarrassment” is the only way to describe this game. It was a repeat of last January, and if it happens again this postseason, it’s time for Roman and maybe even Harbaugh to go.

The offensive play calling was atrocious. Hollywood wasn’t used effectively at all. Dobbins and Gus were the only members of the offense who even showed up.

Judon was awful. There was no presence on the edge all night.

That was a really difficult game to watch on both sides of the ball.

We’ve seen what happens when we abandon the run game. Has the coaching staff not learned from the loss to the Titans last postseason? The Ravens have a chance to win this thing if they just run the ball. Especially against a Chiefs defense that has struggled against the run thus far in the 2020 season.
It looked like instead of playing to the Chiefs weaknesses, defensive coordinator Wink Martindale only had one plan. The same one the Ravens have every week: blitz the living ish out of the opponent. That was a bad decision given how good Mahomes has been when blitzed.
Lamar Jackson looked off his game and showcased to the world that he still needs to develop his deep passes, especially outside the numbers. Perhaps the inaccuracy stemmed from poor O-Line play. Regardless, we need to see improvement there.
Mark Andrews looked like a completely different player. Instead of making difficult catches in crucial situations, he dropped numerous balls, many of which were not tough plays to make.
The defense showed what they are capable of on a few occasions by making the 4th down stop and a few other crucial plays. But overall, they got torched and looked completely outclassed. They looked confused often and there were missed or broken tackles on nearly every play.
This team looked defeated after the first couple drives and they blew the momentum swing after an impressive kick return for a touchdown by rookie Devin Duvernay.
Overall, not surprised at all with the result. The Ravens came in with a bad game plan and looked ill prepared. You aren’t going to beat Patrick Mahomes by scoring three total points on offense in the first half of the game. Jackson has yet to prove that he can beat good teams in close games.