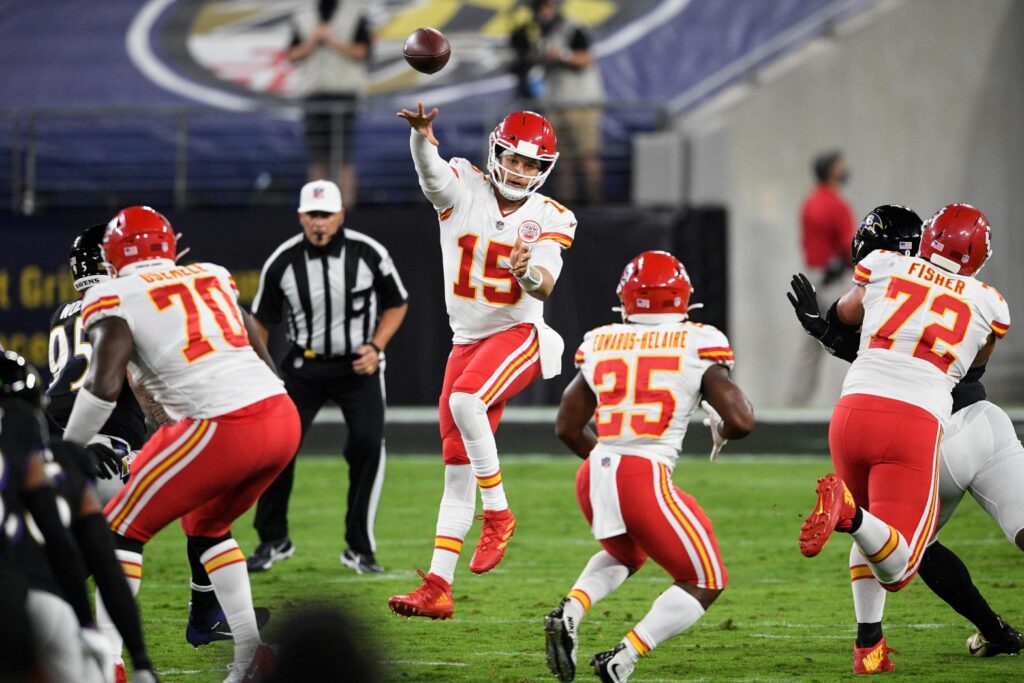 The game was promoted as a preview of the AFC Championship. Mahomes v. Jackson. The last two MVP winners going head-to-head in a September clash. Yet early on it became painfully clear that the Ravens aren’t yet in the Chiefs’ class. Not on offense. Not in their respective game planning and shockingly, not on defense. At least not tonight.

We all heard before the game, repeatedly, that Lamar had yet to defeat Mahomes; that he’s never come from behind to win a game. And of course that last zinger — Lamar hasn’t won a playoff game. Unfortunately, he had a chance to put two of those dubious distinctions to rest, but failed. All three survive as lasting criticisms. And Mahomes was brilliant.

The Ravens fall to (2-1) and now find themselves a game back of the AFC North Division leading Steelers. Talk about adding insult to injury.

The Ravens interior defensive line played well. Calais Campbell, Derek Wolfe and Brandon Williams all contributed. If only the rest of their defensive mates had done half as much…The Ravens rushed for 158 yards on 21 carries (7.5 YPC). The trouble is then didn’t trust it enough. More “Bus” rides were in order… Nice pitch and catch from Lamar to Nick Boyle for the team’s only offensive touchdown…Justin Tucker was dead center on each of his attempts, the longest from 42. James Proche had a nice 16 yard punt return that kept the Ravens from starting a drive deep in their own territory.

Lamar Jackson was off his game. He seemed a little amped up and forced some throws while missing on a couple others, most notably a 9-route down the right sideline during the Ravens final possession. He certainly didn’t get much help from his ace tight end and his No. 1 WR didn’t track the ball well on a go route down the left sideline…Miles Boykin looked clueless in general and he and Willie Snead’s collision on intersecting crossers looked like the Mean Machine’s first practice at the Citrus State Prison. Where’s Paul Crewe when you need him? …When the Ravens get behind, granted it doesn’t happen often, they get away from what defines them – the rushing game. It happened in the Divisional Game against the Titans and it happened again on Monday Night. When the Lamar Jackson-led Ravens trail by 10 points or more they are (0-5). It’s something the Ravens brass really needs to take a close look at. Pass protection was once again subpar. Lamar was sacked four times and regularly on the run which undermined the integrity of play design. 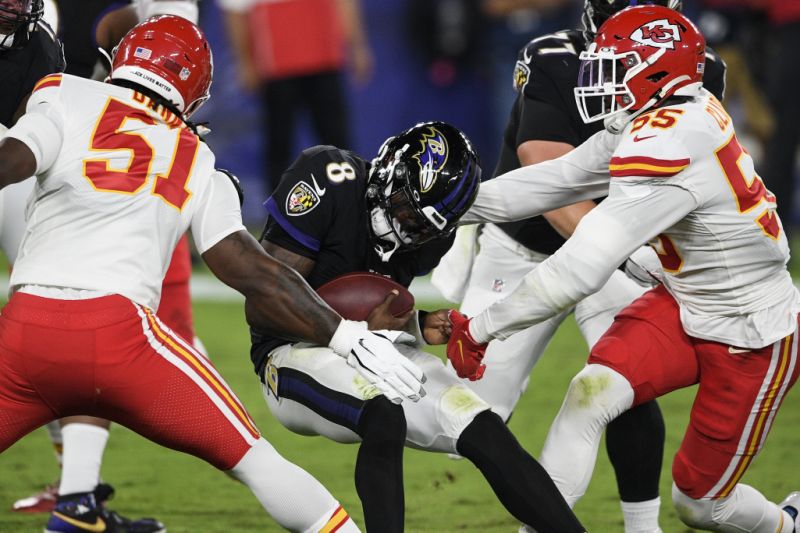 The Ravens pass rush was a question mark entering the season. The thought was that they might be better given the expected interior push from Campbell and Wolfe who together might prevent opposing quarterbacks from climbing the pocket. So far, it hasn’t worked out that way. Instead Wink Martindale has to send players from all angles, even their DB’s and that leaves the secondary vulnerable, particularly against a generational player like Mahomes. Teams like the Chargers who put up a good fight against the Chiefs with a rookie quarterback, can disrupt Mahomes a bit because they have the edge rushers to get home with four. It’s Wink’s Achilles heel.

Trailing 13-3 the Ravens got a needed boost from Devin Duvernay who had the league’s first kick return of the season to close the gap to 13-10. The Ravens defense promptly did what they struggled to do throughout the night – force a three-and-out. Three plays and four yards later, the Ravens punted as well. The temporary momentum shift was dead…Down 27-10 with just under 7 minutes to go in the third, the Ravens faced a 4th and 2. Orlando Brown, Jr. committed a false start, the down-and-distance changed to 4th and 7 and Tucker came out to hit a 42-yarder…Matt Skura laid an egg, or did he dump a brick? That snap? What was that? …The Ravens Mark Andrews is an All Pro caliber player. Yet on rare occasion he goes into a funk and like his efforts in Seattle last season, and to a lesser extent during his postseason play in Baltimore against the Titans, his sure-handedness evaporates. Granted, the seam route during the second quarter was a tough catch, but later on a slightly late in-route Andrews failed to corral a catchable ball. And then that drop in the end zone — In. Ex. Cus. Able.

“Lamar needs to prove he can hit the throws when it matters.”
pic.twitter.com/z6YCtu1t2a

Wink Martindale moved Matt Judon all over the defensive front to try and create pressure on Mahomes. The most memorable contributions all night from the Ravens franchise tag player was to hit Mahomes with an elbow after the play and a bit later he jumped offsides. Not a bad night’s work for $1M+…Patrick Queen was awful in coverage. He looked lost as did rookie sidekick Malik Harrison. When Chris Board is eating up snaps at ILB, you know it was a bad night for the young backers…Tackling was shoddy…Confusion and blown assignments seemed like the norm tonight in the Ravens secondary, the biggest culprit being Marcus Peters. Maybe the Chiefs used their knowledge of Peters’ and his habit of peeking in the backfield against him.

Overall, Andy Reid’s staff did a much better job preparing their team than the Ravens staff did. Of course it doesn’t hurt when your team executes the plan almost flawlessly.

And then there’s this:

Mo, somewhere up there I know you are disappointed yet I can almost hear you saying, “It’s only the third game. There’s plenty of time left. We’ll get another chance.”

And you would be right.

But in your honor, the one player who provided a spark and a momentary glimmer of hope, was rookie WR Devin Duvernay.

We’re on to the team formerly known as the Redskins.