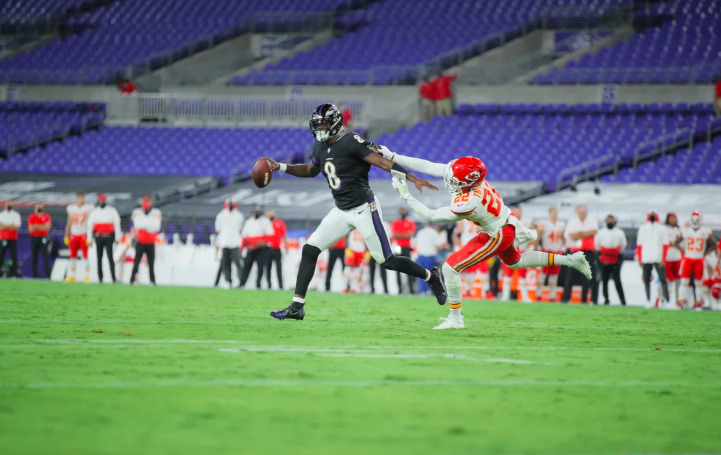 The Ravens were outplayed, outclassed, and out-coached against the Chiefs.

Kansas City jumped on the Ravens early and never relented in a 34-20 victory.

The game didn’t feel that close.

“We got beat just about every way you can get beat, and we understand that,” Ravens coach John Harbaugh said. “We have a long way to go to get better. This will be a beginning for us.”

While it was a disappointing performance, there has to be some perspective. It’s only Week 3 and this setback will surely not define the Ravens season. It was also a lesson in humility and the players and coaches knew they have a long way to go before they’re a championship-caliber football team.

The difference between them and the Chiefs is drastic at this point in the season.

Chiefs quarterback Patrick Mahomes completely outplayed Lamar Jackson, who had one of his worst games as a starter. Mahomes was 31 of 41 for 385 yards with four touchdowns (135.5 rating). He routinely picked on the Ravens secondary, most notably against his former teammate Marcus Peters.

The Ravens also could not get off the field on third down, allowing Kansas City to convert on 10 of their 13 opportunities. The Chiefs piled up 517 yards of total offense.

“They didn’t give that guy a half-a-billion dollars for no reason,” Ravens defensive end Calais Campbell said about Mahomes. “He’s an incredible talent, and he just made play after play. I know who we are, and what we’re capable of, and he was able to go out there and do some great things against us. So, you have to take your hat off to him and give him some respect.

“I’m really looking forward to earning the right to try to face them again because I’m very confident that if we play the game we’re supposed to, we can hang with those guys.”

Meanwhile, Jackson never got into sync with the rest of the offense. He completed 15 of 28 passes for 97 yards (73.1 rating). Late in the first half, he was averaging 1.5 yards per pass. He was also sacked four times.

“Just wasn’t on point tonight, that’s all. We’ve got to get ready for practice and get better.”

The Ravens will try to flush this game fairly quickly with a short week and a game against Washington in Week 4. The Steelers are now in sole possession of first place, but there is plenty of football left to play.

Last year, the Ravens lost two straight games before reeling off 14 consecutive victories. They have the talent for a repeat performance.

They certainly can’t afford another performance like Monday night.

“It’s a player’s game, and I think we need to do better out there, and I think we will do that,” said tight end Nick Boyle, who caught his first touchdown of the season. “I don’t think anyone on the team is discouraged, or this game isn’t going to affect our future, which is most important. I have no doubt we’re going to come back to work tomorrow, go to practice and move on.”