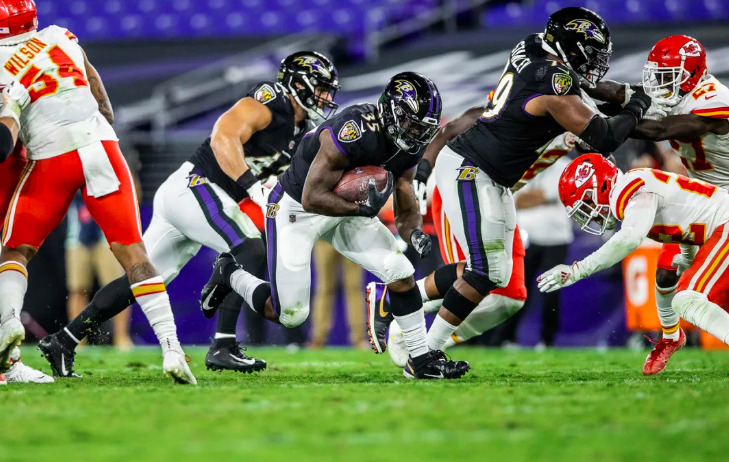 I thought Monday night would be different. With the Chiefs coming off a close overtime win over the Chargers last week and the Ravens cruising easily to 2-0, I thought the third meeting between Lamar Jackson and Patrick Mahomes would be different from the previous two.

It turned out to be much the same from previous encounters with Kansas City, where the Ravens struggled to keep up with the high octane Chiefs offense led by Mahomes.

Here’s a look at whose stock is rising and whose is falling after the loss.

Gus Edwards once again looked like the best runner in the backfield. He is consistently doing more than Mark Ingram with less, averaging 9.8 yards per carry on just four attempts against KC. On the season, Edwards has racked up 129 yards on just 18 carries compared to Ingram’s 114 yards on 29 carries, and is currently tied for first in the league with Arizona quarterback Kyler Murray with 7.2 yards per rush attempt.

Special teams may have been the only aspect of the game in which the Ravens dominated. Coming in, we all saw the comparisons between Justin Tucker and the Chiefs’ Harrison Butker. Tucker put those to rest, nailing his two field goals and two extra point attempts while Butker missed both a field goal and extra point.

Elsewhere, rookies Devin Duvernay and James Proche shined in the return game. Duvernay reached 21 miles per hour on his kickoff return for a touchdown, which is the top speed an AFC ball carrier has reached this season. Proche added a solid 16-yard return on a punt. I’m looking forward to hopefully seeing their involvement in the offense increase in the coming weeks, too.

If not for the return touchdown and Butker’s missed kicks, a final score of 38-13 was possible, and would have made things look even uglier.

The collapse of the offense was eerily similar to the playoff loss to Tennessee. Completely abandoning the run game can not happen.

I point to a sequence on the very first drive. As we all saw, the Ravens offense quickly and efficiently marched downfield into the red zone. First and ten on the 15-yard line, and a touch pass to a sweeping Devin Duvernay gains seven yards and sets Roman and the offense up with second and short. You would think a team that set all sorts of records in rushing would continue to do what got them in scoring position in the first place, but instead Roman calls two pass plays in a row.

The results? A throw away to avoid a sack with no one open, and a completed pass short of the first down marker to bring Tucker onto the field. Six points right there would have been huge, and a touchdown on the first possession could have set the tone and allowed them to stick with their style of play, which Roman seemingly only does with a lead.

Moving away from the run game is the biggest takeaway for me. Every time it happens, the Ravens lose. There’s a debate out there to be had if the Ravens are built to come from behind (so far they aren’t), but that’s not what this is. In seemingly every high stakes game, whether it be in the playoffs or against Kansas City, Roman seems to abandon the run.

As I said previously, I would like to see Duvernay and Proche’s involvement in the offense increase. The Chiefs have at least three speedsters at receiver, and they excel at taking the top off the defense and allowing Mahomes to show off his arm while Travis Kelce and Clyde Edwards-Helaire work in the middle of the field and out of the backfield, respectively.

Furthermore, Andy Reid and Eric Beinemy dove deep into the playbook with touchdowns to the fullback and an offensive lineman. John Harbaugh and Roman have the personnel to mimic some of this. Duvernay played on just seven offensive snaps, and Proche never saw the field on that side of the ball. These two offer elite speed, something the other pass catchers outside of Marquise Brown don’t have, and would add another wrinkle to an already lethal offense.

The Ravens pass rush forced little pressure, collected zero sacks, and let Mahomes escape and make throws all night; not a winning formula versus the best quarterback in the league. Matthew Judon, playing on the franchise tag, was nowhere to be found yet again. He failed to set the edge and struggled when the Chiefs pass protection forced him inside.

Meanwhile, the run defense was good. Edwards-Helaire ran for just 64 yards on 20 carries and the combination of Brandon Williams, Derek Wolfe, and Calais Campbell frequently kept runs from gaining any more than a few yards at most. We need similar play from the pass rush in order to beat teams on the Chiefs level. Every week it’s looking more and more like Jadeveon Clowney would have been a huge help.

Mark Andrews and Brown combined for five drops and just five catches on 14 targets between the two. Jackson missed on a deep ball to Brown that could have easily been a score had Jackson added a little bit of an arc to his throw, but Brown slightly misjudged another deep ball earlier in the game to go along with the drops.

Jackson targeted Andrews on two passes in particular which, although they were tough grabs, should have been caught. One, which would have been a 26-yard score, would have made it a 27-17 game midway through the third quarter, but instead they were forced to settle for a field goal. The other, a 24-yard pass down the middle of the field on a second and six five minutes into the second quarter, would have prolonged a drive that resulted in a Sam Koch punt two plays later. This game was eerily similar to last year’s win in Seattle, where Andrews dropped three passes in just the second half on that rainy Sunday.

“Lamar needs to prove he can hit the throws when it matters.”
pic.twitter.com/z6YCtu1t2a

For the second straight week, Brown and Andrews have both been held to five or fewer receptions and under 50 yards each.