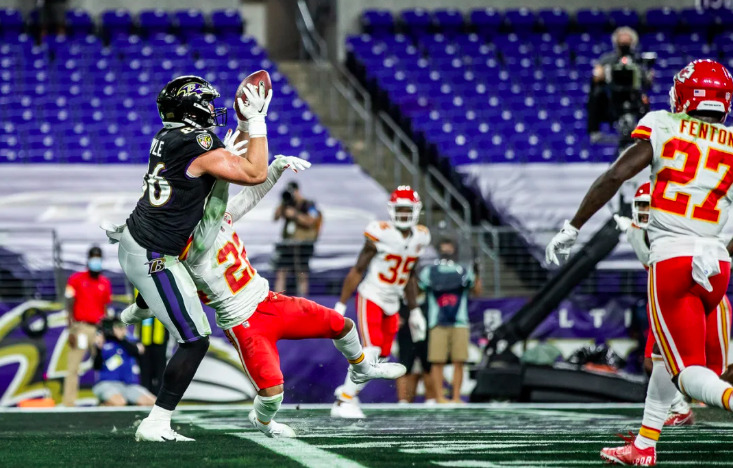 Here are the Game-Changing plays from Ravens-Chiefs.

Lamar Jackson takes the shotgun snap, reads the edge defenders during the mesh option run call, and decides to keep the ball himself. Key blocks by Orlando Brown, Tyre Phillips (double team with Brown), Ronnie Stanley, Bradley Bozeman (pulling blocks to the right with Stanley), and Andrews create running space for Lamar on the right sideline. The run turns into a huge play of 30 yards! Hollywood Brown is not an exceptional blocker, but he does enough hand-fighting to occupy his cornerback.

The Ravens are not able to capitalize on this series, so they settle for a field goal.

The Ravens set up in the shotgun: Snead LWR, Nick Boyle TE-L, Gus Edwards HB-L, Devin Duvernay SRWR (in motion to L), Brown RWR. Key blocks by Bozeman, Boyle (cut blocks), and Edwards to the left sideline help spring Duvernay into some space on the end-around. Duvernay gains seven yards on the play, and he once again shows that good things happen when the ball is in his hands.

All Chiefs receiving options are covered up pretty well on this play, except Tyreek Hill. Marcus Peters plays off coverage and respects Hill’s speed. Hill runs a deep curl route on the right sideline, and Peters almost gets there for a PBU (pass break up), but Patrick Mahomes has a quicker trigger than most of the league. Versus other teams, Peters may make a play on the same route, but he just misses out against KC. Hill and Mahomes are going to make plays against each and every team, and this is just an example of one against Baltimore. The 33-yard gain sets up the Mahomes three-yard touchdown run.

The Chiefs set up in a shotgun formation with Sammy Watkins at SLoWR. Ravens rush five: Bowser LOLB, Patrick Queen LLB-o, Matt Judon LLB-i, Jihad Ward ILB, and Campbell REO. The Chiefs attack Peters in off coverage once again. Andy Reid understands Peters’ tendencies and he attacks with sharp cutting routes. Watkins runs a 10-yard out with an in-breaking hesitation move. Peters bites too hard on the inside break, and loses tight coverage. The conversion on third down stings and provides more momentum for the Chiefs.

The Chiefs line up in a heavy set, with Mahomes under center, and Hill lines up as the deep HB. The Ravens employ a four man rush: (Judon LOLB, Ward DT-L, Derek Wolfe DT-R, and Bowser ROLB). Sherman, the Chiefs FB, lines up as TE-R and he barely blocks Judon, then sets up to receive a pass behind the O-line. Mahomes shovels the ball and Sherman runs into the end zone. The Chiefs pull out all the stops against Baltimore, and it works. Converting for a touchdown puts the Chiefs up 13-3.

The Chiefs kickoff and the Ravens set up to return. Duvernay comes up to catch the ball at the Ravens’ seven-yard line. Key blocks from Bowser, Patrick Ricard, Jalen Richards, Boyle, Atari Alaka, Malik Harrison, Chris Board, Anthony Levine, and Miles Boykin help spring Duvernay up the right sideline for the 93-yard kickoff return for a touchdown. Long returns involve good blocks, and with the blocking paired with Duvernay’s speed and vision, expect more big plays on special teams and offense. The Ravens come within three points once again with the big time return.

The Ravens rush five: Judon LOLB, Wolfe LE, McPhee NT, Bowser ILB-R, Campbell REO. Judon’s looping stunt does not add any pressure on the play (common theme in this game), but Jimmy Smith’s coverage of Travis Kelce throws off the timing of the play. The bunch formation to the right side of the offense has potential to create problems, but the secondary plays sticky coverage leaving Kelce as the best option. Mahomes normally makes this play, but the Ravens are able to force the three and out.

The Chiefs line up in a heavy formation with 2 WRs, 1 TE, 1 RB, and 1 FB. Hill lines up as RWR with Marcus Peters in press coverage. Peters covers Hill as well as anyone can, but Mahomes throws a beautiful tight-window pass over Hill’s right shoulder for the touchdown. L.J. Fort bumps into Peters while covering Sherman; this bump may have created a little separation for Hill. Sometimes you have to flat out respect a play from the other team, and Mahomes and Hill gain that respect on the beautiful throw and catch.

Lamar comes out in the shotgun: Brown LWR, Snead SLWR/ FB-L (in motion to R), Edwards HB, Boyle TE-R, Boykin RWR. Lamar runs play action to Edwards, then throws a perfect dart to Boyle on a tightly contested in-route. Boyle makes a great catch, giving relief to fans after Andrews’ drops. The entire offensive line provides a clean pocket for Jackson, aiding in the touchdown play. Thornhill (#22) covers Boyle really well, but Nick makes the sure-handed catch in the back of the end zone.

The Chiefs line up in a jumbo formation: 6 OL, 1 TE, 2 WRs, 1 RB. LT, Eric Fisher reports as an eligible receiver before the play. Malik Harrison plays ROLB on the play and rushes off the edge. Fisher blocks Harrison briefly, then he leaks out to the left flat for the touchdown reception. Any time that an offensive lineman reports as eligible, defensive players should alert everyone so each guy is ready for the possible receiving threat. Harrison hopefully learns from his rookie mistake, and next time covers any lineman route. Reid and company pull out the stops in Baltimore for the last time in Week 3, scoring another touchdown and adding to their lead.

Kansas City absolutely out-coached and out-executed Baltimore in every facet of the game (minus special teams). Time to move on to Washington.