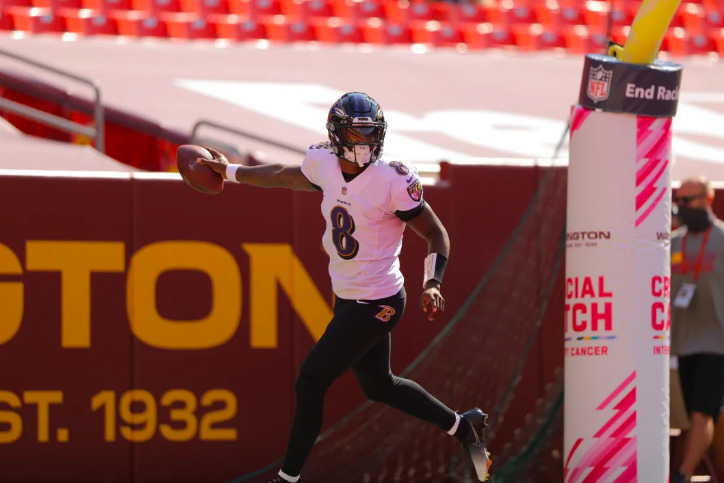 Your Baltimore Ravens get to the end of the first quarter of the season with a 3-1 record after downing the Washington Football Team 31-17. I’m not good at math, but Matt Wise has a good breakdown of what this means going forward…

In the 2nd quarter, the #Ravens play…#Bengals#Eagles#Steelers#Colts

Four 3-1 quarters is a 12 win season & a playoff berth.#RavensFlock

12 wins always seemed like an appropriate goal for the Ravens, so taking it four games at a time and winning three of the four seems like a good approach. So far, so good!

That said, Sunday’s win still just didn’t feel like a 31-17 game, which really says more to me about how spoiled we all got last season watching blowout after blowout.

Let’s break it down to see how each group did on Sunday.

The offense struggled mightily against the Chiefs in Week 3 and a matchup against Washington seemed like a great opportunity to get back to their roots and deliver a good performance.

It’s not necessarily that they played poorly (they didn’t), but I think I set my expectations too high. The play calling still left a lot to be desired (we’ll get into that later), but most noticeably, there’s still some execution issues which shows they’re just not 100% firing on all cylinders yet.

Running the ball will help settle any quarterback into a game, but what I notice that most about Lamar Jackson is that he really needs to be the one to make a few plays with his legs and build his confidence. Lamar took a 50-yard carry for a house call and noticeably looked better as a passer after doing so.

Lamar definitely looks sharper as a passer on his timing routes (we’ll address the out-route INT in the receiver section), but what’s missing this year is his placement down field. He missed Hollywood Brown with a step on his defender twice last week and then once again this week.

However, Lamar did settle in and his 22-yard TD pass to Mark Andrews brought back the flashes of 2019 (as did that 50-yard highlight reel run). There’s some kinks to work out, but seeing that strike – which had superb ball placement – eased some of my concerns.

It was an even balance of carries to the RB group with Gus Edwards, Mark Ingram and J.K. Dobbins taking nine, eight and five carries, respectively. The real issue here was the run blocking in the first half. Once the line settled in coming out of halftime you could see the RBs able to get going and you have to feel very good about this group.

Gus Edwards looks so much more fluid on non-option runs this year, Mark Ingram is showing he can get it done between the tackles, and Dobbins has displayed speed and creativity. If the run blocking can continue to take some steps forward, we’re going to see a three-headed monster in the backfield with different skillsets that can get the Ravens back to those long drives that suck the air out of a defense.

Another guy who deserves a bit shout out is Patrick Ricard. He was getting it done with blocks between the tackles today.

This was a great bounce back for Marquise Brown who had an up-and-down performance against the Chiefs. He showed off that insane deep speed, tracked the ball well and displayed some excellent vision when he almost got in the end zone before Ingram came in and finished it off. Andrews also got back to business after a rough outing against the Chiefs, catching all three of his targets for 57 yards and two scores.

The real issue I had with this group was Miles Boykin. Look, I don’t want to sit here and roast the guy, but it’s frustrating to see similar issues continue to pop up. His breaking routes are slow and it doesn’t appear to be getting better. On Jackson’s INT, it looked pretty well timed, but Boykin just doesn’t get his head around. It’s either that he’s too slow or didn’t know that the ball was coming. Either way, it’s a continuing problem, as we saw the same thing in the red zone against Cleveland in Week 1, when Boykin got around to an out route slowly and the ball went off his fingertips. As I said during the game…

Even without Chase Young and Matt Ioannidis, the WFT has a pretty stout front four. It didn’t help that Ronnie Stanley missed the game with a shoulder injury, forcing Orlando Brown to move to LT and D.J. Fluker to come in at RT.

However, the line seemed to jell a little bit this game. The interior had some missed blocks in the first half, but really settled in coming out of the break, and the Ravens were able to run the ball more effectively. The pass protection also looked a little bit better. There still seems to be some trust issues between Jackson and his line, as we saw a few frantic drop backs without pressure. However, I thought the Ravens did a good job protecting Lamar (WFT only had three QB hits and one sack). Fluker, in particular, had a solid game at RT, relative to expectations.

The theme through these grades is expectations. Dwayne Haskins has struggled to start the season and, while the WFT has some threats in Terry McLaurin and Antonio Gibson, they don’t have a plethora of weapons.

You can tell the Washington coaching staff saw the Ravens get abused by screens and RB passes against Kansas City and made sure they deployed them accordingly. Gibson caught four balls for 82 yards and Haskins just missed Gibson on a wheel route out of the backfield. J.D. McKissick also added seven catches for 40 yards.

Pass-catching RBs is going to be a concern this year until the Ravens prove they can stop it.

Hello expectations. You best believe I was high on this interior defensive line group of Brandon Williams, Derek Wolfe/Justin Madubuike (note: both were IA this week) and Calais Campbell. However, it just hasn’t seemed to work out the way we all thought it would, especially when they branded themselves the ‘monstars.’

Campbell was able to generate some pressure and get another pass knocked down using his incredible length, and Williams clogged some lanes, but the pass rush from the interior just isn’t what I expected.

The game script didn’t go well for Washington to get a run game going, but when they did run the interior did a solid job of disrupting running lanes and holding them to three yards a carry, which bumps the grade a bit.

There’s nothing I want to see more than a rookie bounce back after a rough outing. Patrick Queen got targeted by Andy Reid on Monday and he answered all criticism with a solid performance, leading the team with 12 tackles, including three for loss and one where he jumped up at the LOS on the goal line and knocked down the Washington RB trying to leap the pile. There’s still work to be done here for the 21-year old rookie, but his confidence is there and I admire his ability to bounce back.

Matt Judon also showed up, coming unblocked for a sack, before adding a nice secondary pass rush move and collecting a second sack on the day. He finished with two sacks and five QB hits, a good answer to the fans that were looking for pass rush production.

Tyus Bowser also had a solid game, including an effective screen defense where he sniffed it out to his side, came off the block and got the ball carrier from behind for a short gain.

This is a group I’m going to have to pay close attention to during the re-watch. Haskins was able to complete 32 of 45 passes for over 300 yards and it really felt like some of these receivers had way too much open ground.

Marcus Peters had another down game and even Marlon Humphrey gave up a little too much room at times, as Washington seemed content throwing underneath coverages. However, shout out to Hump for forcing another fumble with his patented fruit punch technique. I’ve never seen a CB able to force a fumble like Humphrey.

The safety duo seems to be jelling a bit as well as I felt Chuck Clark and DeShon Elliott had better outings.

Still, 300+ yards and a lot of YAC? Somewhat disappointing.

Sam Koch continues to be the best throwing punter in the league! He completed a 15-yarder to Boykin on a punt fake. Justin Tucker keeps doing Justin Tucker things as well.

Another bright spot from the rookies, as James Proche had a solid day on punt returns and also caught the onside kick attempt with a nice display of hands.

My man collects the onside kick.

Proche becoming one of my favourite players. #RavensFlock

It was another rough half for Greg Roman to start the game. I really felt this game was a ‘get right’ game for the offense. Come out, run the ball and get back to basics against a team that’s likely to finish in the bottom quarter of the league standings.

However, it seems in the run game Roman is trying to go east-west with some of these play calls. There was a fake pitch to Dobbins and then an attempt at a swing pass to Dobbins in the first half that just weren’t there.

Those are the play calls you get going when you’re executing. Right now, the Ravens need to settle down, and to me that’s back to basic Raven football that set a record in rushing yards last year, mostly by running north-south on power and option plays. I hope to see that against Cincinnati next week.

Wink Martindale called a solid game. He seemed okay with letting Washington get away with their short passing game and it worked as they only scored 17 points. However, he needs to realize that the book is out on his 3rd-and-long aggressiveness, and teams are exploiting that with screens.

Speaking of aggression, I loved Coach Harbaugh’s on the 4th down fake punt. It definitely caught me off guard!

Mark Andrews gets today’s game ball. People were all over him after a disappointing game against the Chiefs, and rightly so. There’s no better way to answer than to catch every ball thrown your way and put two of them up on the scoreboard. Good on Andrews for answering his critics.