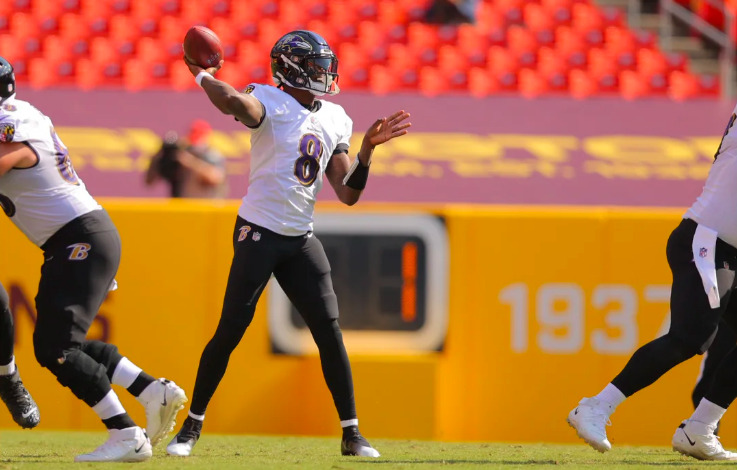 The Ravens faced some questions heading into their Week 4 game against the aptly named Washington Football Team.

The Chiefs ran Baltimore off the field the previous week and it was the type of loss that some pundits speculated could have a lingering effect on the psyche of the team.

The Ravens put those worries to rest in a 31-17 victory over Washington at FedExField. While the Ravens did not play particularly well, it was a methodical workmanlike performance against a team that has played solid defensively.

“Just a really big win; that’s really an important win,” Baltimore coach John Harbaugh said. “Washington played well, very well. [They] forced two turnovers on us and did some good things with their offensive game plan. I thought it was effective at times, but our guys played hard.

“We ran the ball well, made some huge, very important conversions in the pass game, but that was kind of the key to the pass game right there. We didn’t have gigantic plays, but we certainly had conversion plays.”

Ravens offensive coordinator Greg Roman faced some criticism for abandoning the run too quickly in the 34-20 loss to Kansas City. He was more dedicated to running the football against Washington and the Ravens finished with 144 yards on 32 carries,

Quarterback Lamar Jackson had the play of the game with a 50-yard touchdown run — the longest of his career. Jackson became the quickest player in NFL history to have 5,000 yards passing and 2,000 yards rushing, reaching that milestone in 35 games, surpassing the previous mark set by Michael Vick (39 games).

“Lamar did a great job on that [50-yard touchdown] play; it was really a great read by him, and obviously, the acceleration and the score,” Harbaugh said. “But the rest of it was really … It was a grind. That’s a good defensive line [and] good linebackers.

“They brought some run pressures, quite a bit actually. I thought our guys grounded out pretty darn well, but I give them a lot of credit. That was a hard-fought game in terms of our run game.”

Opponents have done a better job this season spying Jackson. However, he’s mostly made the proper adjustments and made key plays when the Ravens needed them.

Jackson’s stats are not as gaudy as last season through four games, but that’s the least of his concerns. His goal is to win a Super Bowl and the Ravens have to improve to reach that goal, especially if Chiefs quarterback Patrick Mahomes continues to play at such a high level.

“I’m focused on trying to win a championship,” Jackson said. “We still have bigger fish to fry right now. Those types of things, I feel like I’ll cherish those later.”

The Ravens are also going to be in a tough battle to win a third straight AFC North crown. The Steelers have one of the best defenses in the NFL and lead the league with 16 sacks. The Browns suddenly have a new lease on life after being embarrassed by the Ravens 38-6 in the season opener. Cleveland has won three consecutive games, including a 49-38 victory on the road against Dallas on Sunday.

The Ravens have a Week 5 matchup against the Bengals, who won their first game of the season this week against Jacksonville.

The Ravens are the hunted and they’re embracing that role.

“Every team plays you different,” said Ravens tight end Mark Andrews, who had two touchdowns against Washington. “With us, everyone kind of has a bullseye on us, so teams are coming out and playing a bunch of different defenses, and it’s a unique task, just because you never know what they’re going to be playing in.

“Everyone thinks that they have the formula to stop us, so we see different things every week, and that’s only going to make us battle-hardened. To continue to play through that, and learn and grow as a unit, we’re going to be good.”