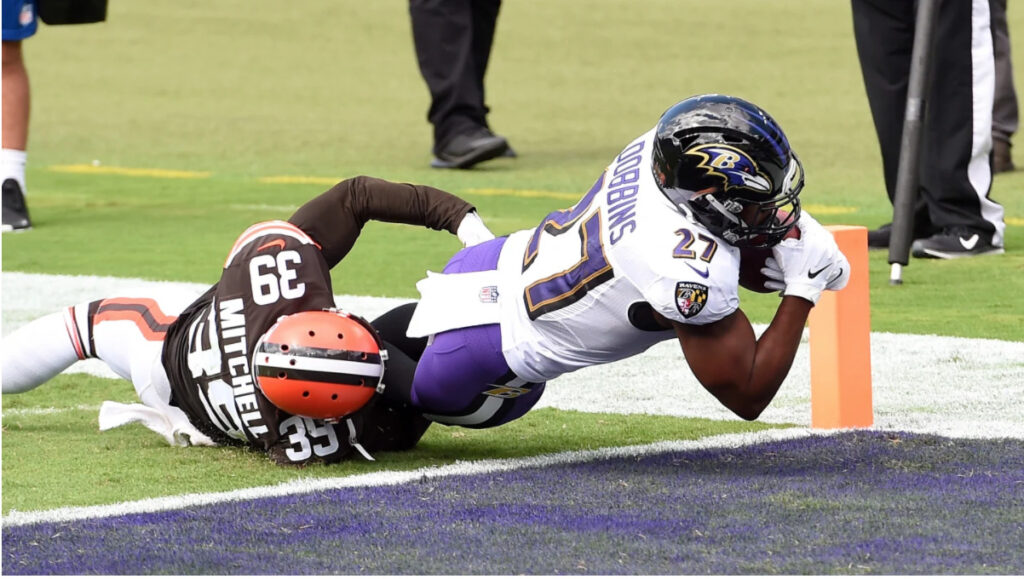 On Sunday the Ravens won convincingly v. a divisional foe by 24 points. They led throughout and threatened to post a shutout, and until the 7:49 mark of the fourth quarter the Bengals had a goose egg on the scoreboard. Despite it all, there seems to be a growing level of unrest amongst Ravens fans centered upon Greg Roman’s offense. The overriding concern is that offensively, the Ravens are getting away from what they do best – run the football. Accusations are abundant suggesting Roman has become a bit too pass happy.

At least that’s the perception.

Let’s take a look at the reality.

Of all teams that have played 5 games, the Ravens rank last in pass attempts with 138. The three teams as of this writing, that rank lower in attempts than the Ravens are the Lions (137), the Patriots (128) and the Titans (104). Each has played just four games.

The Ravens rank eighth in rushing attempts, second in rushing yards (804) and first in yards per carry (5.6)

Perhaps the falloff in Lamar’s production as a runner has cast the perception that the Ravens aren’t running enough. Here’s a comparative snapshot of Lamar’s rushing totals through five games this season and last:

The difference is marginal, particularly when measured on a game-by-game basis. During the first five games of 2019 Lamar averaged 62.8 YPG while in 2020 he’s averaged 47.6.

There’s little doubt that opponents have adjusted and the Ravens need to fine tune their approach and counter the adjusted schemes thrown at them. We have to assume that the Ravens brain trust is doing exactly that. And meanwhile, as they tweak their approach and young players begin to settle into their roles, the team is (4-1), a game better than a season ago. That’s not a bad place to be.

And one more thought on this…

The Ravens would never admit it but maybe they knew going into this past week’s game against Cincinnati, that they were going to clamp down on Joe Burrow & Co. Maybe they knew that going in, the offense might only need 20 points to win the game and they took this game as an opportunity to broaden the offense – expand the playbook. Maybe their vision for the offense is long-term and they are willing to take some short-term hits in order to be a more multi-faceted offense when the postseason arrives.

Maybe they believe such an approach is the one that will enable them to go deeper into the playoffs as they seek their third Lombardi.

After all there’s no sense in peaking in October, right?

Congestion in the Middle

Bengals Safety Jesse Bates shared this during the postgame interviews about the Ravens offense:

The middle of the field is where Lamar is most accurate and it’s where he prefers to attack. That’s why it’s incumbent upon Greg Roman to spread the field. Otherwise, the Ravens receivers will absorb some body blows that could put their availability in peril.

During his presser on Monday John Harbaugh shared what the Ravens saw from the Bengals defense:

“They did do something completely different. They ran a true college four-three type of a look. They were playing quarters with the safeties low.”

In other words, the Bengals were squatting on the Ravens and had little confidence that Lamar could beat them deep. Until he does, the Ravens should be prepared to see more of the same.

The Ravens bye week is approaching. Following their game this weekend against the Eagles at The Linc, the Ravens won’t play again until November 1 when they host the Steelers. And while there will be time for the players to convalesce, GM Eric DeCosta is unlikely to get much rest at all. The trade deadline is October 29, 2020 and DeCosta will be in search of the right fit to augment the roster and improve an area of weakness.

Last season DeCosta scoured the rosters of the other 31 teams. He considered the state of each franchise. Where they were in the standings. Was there a chance for a playoff berth and if not would they consider moving players? What was the cap situation of each team and did they have any pending free agents that they couldn’t afford to keep?

You can bet that DeCosta is doing the same this year and among the most pressing areas of need are, in no particular order of importance: OL, Edge, WR and TE. A few names that have been bantered about in the rumor mill include Tak McKinley (Edge), Marvin Jones (WR), Golden Tate (WR), DJ Chark (WR), Alex Mack (C), Yannick Ngakoue (Edge) and Evan Engram (TE).

I Can’t See For Miles

In 21 career games Miles Boykin has been targeted 39 times with 23 catches. He has size and speed but fails to gain separation primarily because he isn’t a sharp route runner and as a long strider, he’s slows when getting out of his breaks. You might think that he could develop into a red zone target given his straight-line speed, length and high-point potential but that just hasn’t materialized. Perhaps his arsenal isn’t diverse enough and teams recognize him as a one-trick pony. And when they do, you become a no-trick pony.

One of our outstanding contributors to the RSR forums is JimZipCode. JZC has put together a nice montage of video clips which effectively illustrates the pros and cons of Boykin who yesterday, turned 24 years young.

When the Ravens drafted J.K. Dobbins with the 55th overall pick in the 2020 NFL Draft, it was like a gift that dropped into the lap of Eric DeCosta. Statistically, Dobbins’ collegiate career is very comparable to that of Ezekiel Elliott who like Dobbins, was an Ohio State Buckeye. And like Rice and Elliott, Dobbins is an accomplished pass catcher. When called upon this season, Dobbins has impressed. He’s rushed for 126 yards on just 16 carries (7.9 YPC) and he’s caught 9 of his 10 targets for 81 yards.

For my money, Dobbins has a higher ceiling than Rice had during his prime. He’s a bit faster and more explosive than Ray and a bit more polished as a receiver than Rice at similar points in their respective careers. That said, at his current use rate, Dobbins will post 51 carries and he’ll be targeted 32 times by Lamar Jackson. Comparatively speaking in 13 games as a rookie, Rice had 107 rushing attempts and was targeted 43 times by Joe Flacco.

Now you might think that Rice’s workload ramped up as his rookie season progressed. That actually wasn’t the case. During Rice’s first game he carried the ball 22 times and caught 3 passes. His workload diminished as the season unfurled due in part to a couple of nagging injuries and the effectiveness of the McGahee-McClain heavy one-two punch.

Gus Edwards is a nice closer who can secure the football and wear down opponents late in a game. Mark Ingram is a little long in the tooth to be the bell cow but he can still contribute if preserved properly.

But Dobbins should be Roman’s go-to back. Maybe he’s a bit behind mentally given the shortened training camp and the lack of a preseason. Maybe Roman’s plan is to unleash Dobbins gradually. Whatever the case may be, the Ravens are doing themselves an injustice by keeping this thoroughbred penned up.

If the Ravens want to regularly put the hay in the barn, they’d be wise to get JKD out of it.

Breaking tackles is what the rook does 💪 @Jkdobbins22 @Ravens pic.twitter.com/13c8AQOeri