— Unfortunately, my only miss in Week 5 happened to be my lock of the week. Serves me right for picking a road team on a Thursday night. Tampa went up 13-0 early and I thought they would cruise to an easy cover, but their injuries on offense limited what they could do and they ultimately couldn’t pull away.

Although I missed my lock, I’ll take 9-2 over the past two weeks. We’ll try to keep that rolling into Week 6.

Here are the ATS Standings after Week 5: 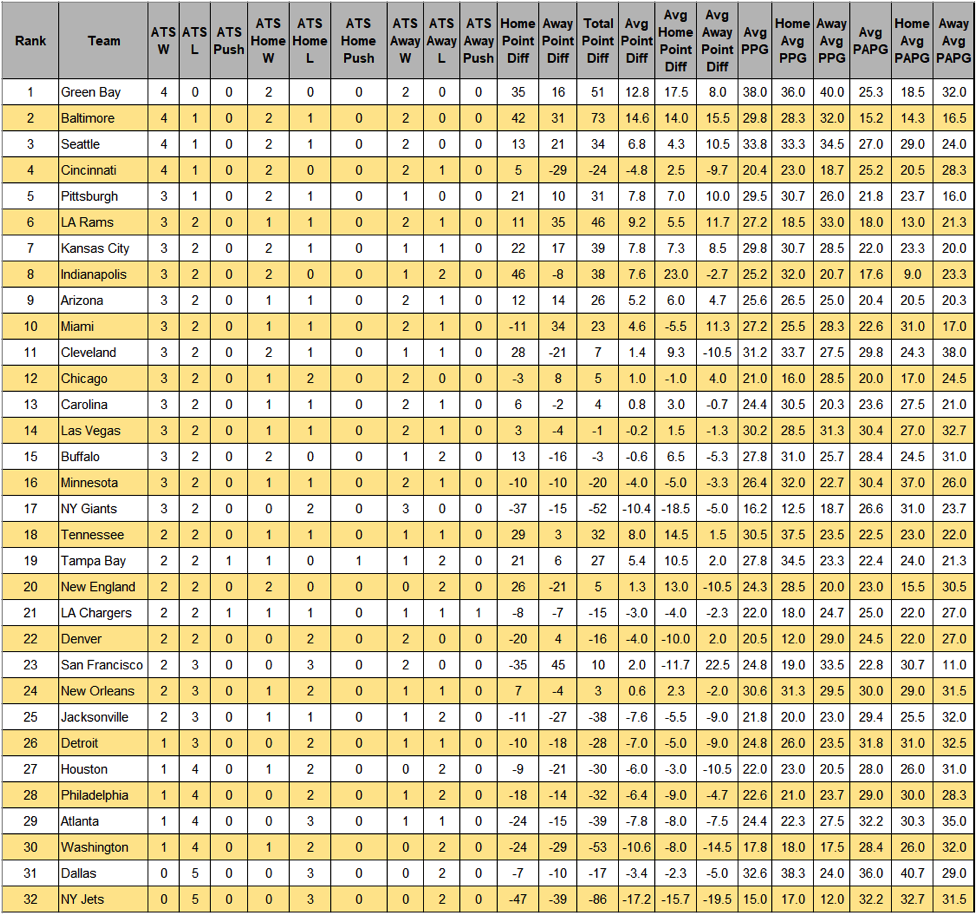 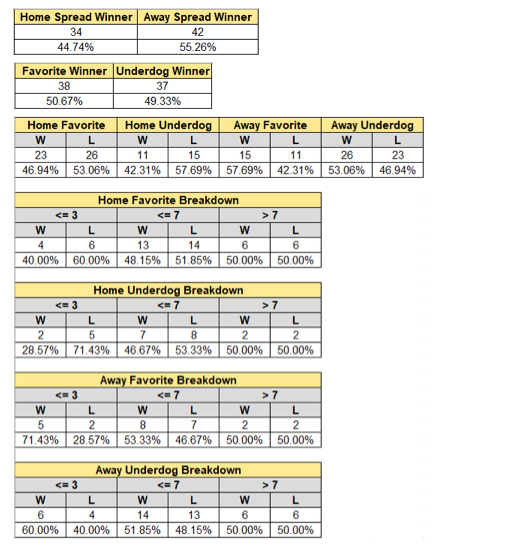 Feel free to play along, tell me where I’m wrong, post your own picks, or just enjoy the read. Here we go with Week 6.

So far in 2020, road favorites of less than or equal to seven points are hitting at a 59% clip. There are several road favorites I like this week starting with Detroit.

I tend to stay away from picking bad teams because they can be very unpredictable. In this case, I do still like the Lions who have put up at least 20 points in each game this season. They’ll be going against a Jacksonville team that is giving up the most yards per play in the league (6.6) so I don’t anticipate the Detroit 20-point streak to stop in Week 6.

The Lions’ defense also isn’t a unit that puts fear into opponents, but I’m just not a Gardner Minshew believer. The Lions will cover and win by a touchdown.

This may be the definition of a trap. San Francisco is banged up, but this is a divisional game which is the only reason I can see this game being only a 3.5-point spread.

The Rams are only allowing 18 points against per game. I can’t foresee San Francisco making much of a dent in that number as they’ve struggled with their offensive identity early on.

L.A. should cover and cover easily.

Dallas is 0-5 ATS so far this season and their defense has been a sieve and rank dead last in scoring defense. Oh, and they’re also starting their backup quarterback Andy Dalton. There aren’t many arguments I can make about this game where I could convince you Dallas is the right play. I’m going with my gut here…

Andy Dalton is a serviceable quarterback who is good enough to keep the Cowboys’ offense humming as it has so far this season and although Kyler Murray is a dynamic talent, something about this game tells me the Cowboys’ defense is going to be able to limit the Cardinals’ offense.

Again, this is my gut talking so we’ll roll the dice.

There seems to be a lot of uneasiness around Baltimore regarding these Ravens. Some of that is justified, but if you look at the glass half full, this team has been winning by double-digits week in and week out while not playing their best football. So giving them only 7.5 points here when they haven’t won a game by less than two touchdowns this season and have a 15.5 average road point differential seems like a gift.

Baltimore is 3rd in the NFL in takeaways (10) and have a streak of 18 straight games with a turnover. On the other side of the ball, the Eagles lead the NFL with 11 turnovers so far this season with eight of those coming from the arm of Carson Wentz. That doesn’t bode well for Philadelphia.

The Ravens will continue their turnover and winning by double-digit streaks alive. Ravens 27-10.

I’m going to continue to ride good teams coming off bad losses in my Week 6 lock. In their loss to Las Vegas in Week 5, Kansas City allowed six plays of 40+ yards. More than anything else, that is what caused them to lose that game.

Buffalo, on the other hand, were dominated at the hands of the Titans which made me scratch my head at this line. The Chiefs defense isn’t much to write home about, but I’m willing to bet they won’t have the same issues giving up big plays this week as they did last week.

With this Chiefs team, I’ll take 3.5 points 10 times out of 10 if that’s all you’re going to take from me. They’ll easily cover this against the Bills and I’d almost be willing to reverse tease this to close to 10 points.

This week I’m going to play a three-team parlay between the Rams, Ravens, and Chiefs. I feel fairly confident in that so we’ll see what happens.