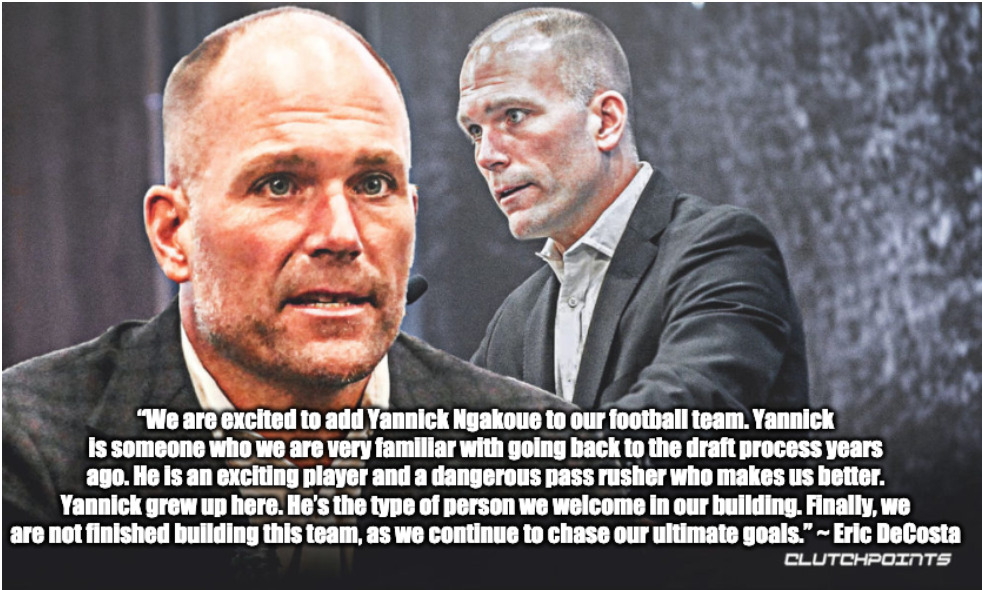 New Ravens’ DE Yannick Ngakoue will fly to Baltimore in the next 24 hours to go through COVID testing so that he can be ready to join his new team next week after it comes off its bye and returns to start preparations for next Sunday’s game against the Pittsburgh Steelers. https://t.co/YLwJX2lNoS

Baltimore has attempted to acquire Yannick Ngakoue multiple times in recent months; Ngakoue hoped to land in Baltimore all along. He grew up in Bowie, Md., starred at Maryland, then was drafted by Jacksonville. Baltimore is his third team in three months, but what he wanted. https://t.co/B3NQfDaRqG

#Ravens GM Eric DeCosta is simply at another level than everyone else.

For the following players, he traded a 5th, a 5th and a 3rd.

He also made sure to trade up and grab Lamar Jackson in the 2018 Draft. pic.twitter.com/hc4TBOKT52

He’s relentless and approaches his job with the steely-eyed conviction of the most focused players. pic.twitter.com/exPMqo5jnY

“It’s a good move for the Ravens. You can never have enough pass rushers in this league.”@PriscoCBS with his instant reaction to the Yannick Ngakoue trade ⬇️ pic.twitter.com/Lq8Ws7ePdK

Anquan Boldin (30), Derrick Mason (31) and Steve Smith, Sr. (35) were all 30-something when they arrived in Baltimore. Dez Bryant is 31. pic.twitter.com/DvfsneKGhP

Reminder about Antonio Brown: The NFL’s investigation into sexual assault allegations remains open. It would not preclude a team from signing Brown, but there is the potential for further discipline if NFL decides there were additional conduct policy violations.

25 years ago- I received an anonymous tip that launched an unforgettable chapter in my reporting career but more importantly, changed the sports landscape in my adopted home of Baltimore.
The back story: https://t.co/62FdcHLwkW@Ravens 🏈 @WJZ #TBT @GerrySandusky pic.twitter.com/4F0QeXMrHM

Some #Ravens fans aren’t confident about the team right now. Just a reminder this pic is from 2012, the day the Ravens lost to the Texans 43-13 to drop to (5-2). There were peaks & valleys but they figured it out, got their O-Line in order & won SB47. It’s a marathon not a sprint pic.twitter.com/ePgkIGEubN

Le’Veon Bell explains why he chose the Chiefs ⬇️ pic.twitter.com/og4KPawRL9

Ryan Fitzpatrick has been benched before, but this one really hurt https://t.co/YGypCTv8aF pic.twitter.com/V54D1VCg3S

RAVENS MIC’D UP IN PHILLY!

“He’s on X Games mode.”@Primetime_jet and Judon on the 🎤 pic.twitter.com/ojYJVSbIxm