How to Hand Pittsburgh Their First Loss

The Pittsburgh Steelers have the best pass rushing defensive line in the NFL. Their defense comes into Baltimore with a league-best 26 sacks. Watt, who leads the team with 5.5 sacks, leads the entire NFL in ESPN’s “Pass Rush Win Rate” (PRWR) metric. Pass Rush Win Rate measures “how often a pass-rusher is able to beat his block within 2.5 seconds.” Watt is joined on PRWR leaderboards by Tuitt, who ranks 6th among defensive tackles. With Watt and Tuitt leading the way, the Steelers rank 1st in the NFL in Team PRWR.

If the Ravens have any chance of beating the Pittsburgh Steelers in Baltimore on Sunday, protecting Lamar Jackson must be the offense’s top priority. Even though the Steelers can “get home with four” as well as any defense in the NFL, they aren’t afraid to double down and bring the blitz. Protecting against the Steelers’ pass rush could mean leaning heavily on a quick hitting pass attack. It might also mean that Greg Roman designs a game plan with a heavy dose of Nick Boyle and Pat Ricard on the field to help the offensive line. Protecting Lamar Jackson is the key to the Ravens establishing an efficient passing game against the Steelers dangerous pass rush.

There is no question that Steelers have a Top 5 defense. An argument could even be made that they have the best defense in the league through seven weeks in the 2020 season. Their defensive line, as we just detailed, is among the NFL’s best. Their defensive backs, led by Minkah Fitzpatrick, have helped the Steelers defense hold opponents to 217.5 pass yards per game (6th best in the NFL). At the start of the season, the Steelers LB corps was led by Devin Bush. Bush, the 10th overall pick in the 2019 NFL Draft, is a highly athletic ILB who had over 100 tackles in his rookie season. After playing every single defensive snap of the Steelers’ first five games of this season, Bush tore his ACL and was ruled out for the remainder of the season.

Bush has been replaced in the middle of the Pittsburgh defense by third year Western Michigan product Robert Spillane. Spillane, who has 18 career tackles, showed up big in last week’s game against the Titans when he fearlessly took on Derrick Henry and stopped him at the goal line. Spillane might play fearlessly and aggressively, but he is nowhere near the athlete that Bush is. The Steelers’ defense doesn’t have many weaknesses, but Roman and Jackson need to test Spillane in pass coverage to see if he is one of them.

On critical downs on Sunday, Roman should go after Spillane by isolating him in coverage against Mark Andrews or forcing him to try to stick with a RB like J.K. Dobbins.

Don’t Give Up On the Run

Regardless of what might happen early in the game on Sunday, the Ravens can’t get too far away from the running game. First and foremost, the Ravens are still at their best when they’re running the football. Jackson, the Ravens’ offensive line and a stable of backs have become an efficient rushing attack with Roman at the helm. The Steelers are very good against the run, but they would become far more dangerous to the Ravens offense if they are not threatened by a rushing attack.

If the Steelers get a lead, know the Ravens are going to keep throwing and can unleash their pass rush, the Ravens will be in a lot of trouble.

*A defender is given credit for “beating his blocker so he’s in better position to stop the runner; disrupting the pocket or running lane by pushing his blocker backwards; containing the runner such that he must adjust his running lane; or recording a tackle within three yards of the line of scrimmage”. 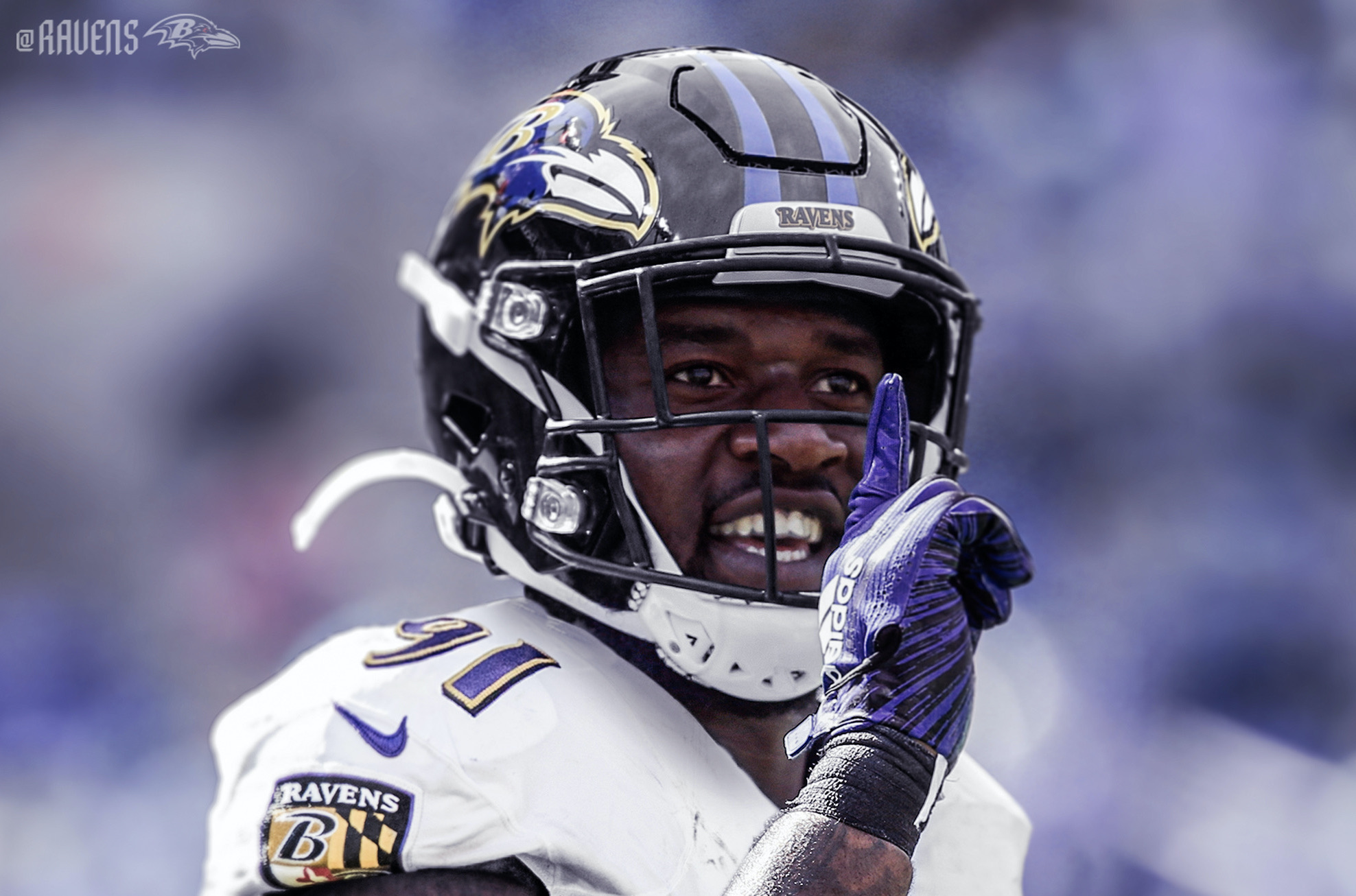 In 2019, Eric DeCosta traded reserve LB Kenny Young and a 5th round pick to the Rams in exchange for CB Marcus Peters. Peters went on to have a fantastic season in Baltimore and, along with Marlon Humphrey, was selected as an AFC 1st Team All Pro. As the icing on the cake of a fantastic Ravens’ deal, DeCosta inked Peters to a three-year contract extension in December.

As the NFL’s 2020 trade deadline drew near, the Ravens made the decision to add yet another big-name piece to an already very formidable defense. In exchange for a 3rd round and conditional 5th round pick, the Ravens brought in OLB/DE Yannick Ngakoue from the Minnesota Vikings. Ngakoue, best known for his time with the Jacksonville Jaguars, should provide an instant boost to the Ravens’ pass rush across from Matt Judon. Tied for 8th in the NFL with five sacks so far this year, Ngakoue will give the Ravens more confidence in their four-man pass rush.

The Steelers have one of the better offensive lines in the NFL. When Ben Roethlisberger drops to pass, he looks to JuJu Smith-Schuster, Chase Claypool, James Washington, Diontae Johnson and Eric Ebron as some of his options. The trade for Ngakoue couldn’t have come at a better time. If he can consistently pressure Roethlisberger, the Ravens won’t have to blitz as often and will be able to commit more resources to coverage.

Wink Martindale should get his new pass rush weapon into the rotation right away and let him hunt for Roethlisberger.

Mix Up the Looks

In practical terms, Roethlisberger’s snap-to-throw time is evidence of how much the Steelers love their quick passing game. Opposing defenses must prepare for the fact that Roethlisberger is often catching the ball in the shotgun, looking at one target and throwing to that first read. The Ravens can help defend the Steelers’ passing attack in a few ways. The Ravens have the option and the ability of playing tight man coverage against Pittsburgh. Players like Humphrey, Peters and Jimmy Smith can really throw off the Steelers’ rhythm by maintaining tight coverage for a few seconds and forcing Roethlisberger to hold onto the ball for longer than usual. Another way that the Ravens can alter the Steelers’ quick passing game is by showing blitz and dropping would-be blitzers into coverage. Drops by unexpected players from the line of scrimmage can lead to big plays for a defense. Calais Campbell has knocked down passes and forced an interception by dropping into coverage and getting his hands in the throwing lanes.

Mixing up the looks will be one of the keys to limiting the success of the Steelers’ quick passing game.

The Steelers present matchup problems across the board. Smith-Schuster, still just 23-years-old, could develop into a true number one WR. Washington and Claypool are both former 2nd round picks with unique talents. Ebron is a highly athletic TE who had enough talent to make him the 1st round selection (10th overall) of the Detroit Lions in the 2014 NFL Draft.

Diontae Johnson is not a household name. He’s probably a player that most fans of the Ravens haven’t even heard of before. Regardless of his level of name recognition, Johnson is a player that the Ravens have to keep an eye on this Sunday. Johnson, a 2019 3rd round pick out of Toledo, finished his rookie season with 59 receptions for 680 receiving yards and five receiving touchdowns. He has dealt with injuries (concussion, back, ankle) that have limited him to just three full games so far this season. In those three games, Johnson averaged 7.6 receptions and 76.3 yards. In those same games, Johnson is averaging 32.3%, 31.7% and 30.6% of the Steelers’ target share. Against the Titans in the NFL’s premier matchup last week, Johnson hauled in nine of his 15 targets for 80 yards and two touchdowns.

The Ravens will have their hands full with the Steelers weapons, but they can’t forget to pay attention to Diontae Johnson.

Robert Spillane signed with the Titans as an undrafted rookie free agent after four years at Western Michigan. After one season, mostly on the practice squad, in Tennessee, Spillane was cut and then signed with the Steelers. With the Steelers in 2019, Spillane exclusively played on special teams. As a replacement for the injured Devin Bush in 2020, Spillane got his first start on defense. Spillane plays hard all the time and made a highlight play against the Titans, but he is completely unproven in pass coverage. Offensive coordinators spend a lot of time working on how they can create favorable matchups for their best weapons.

If the Ravens can get Andrews isolated on Spillane, they may have a very favorable matchup that they can go to against a very tough Steelers defense.