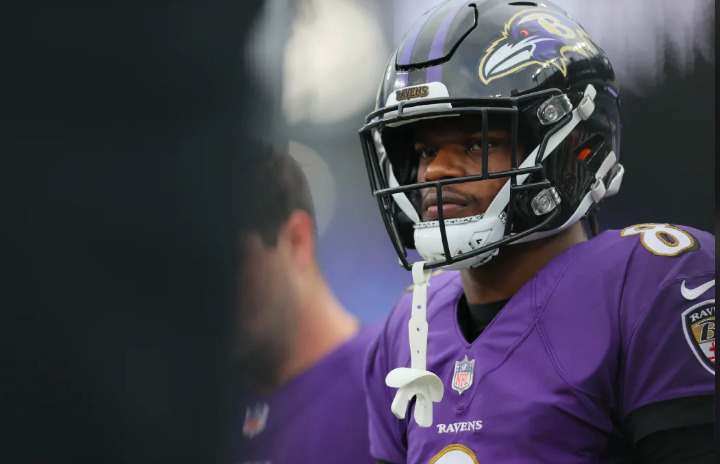 Well, that was humbling.

John Harbaugh was 10-2 coming off the bye week going into Sunday’s contest with the Pittsburgh Steelers. The setting couldn’t have been better. Some fans back in the stands, rested off the bye, hosting your arch nemesis on your turf, and well the Ravens just left too many plays on the field…again.

The story of the game was missed opportunities and, quite frankly, boneheaded mistakes. We’ll get into all of it below.

The running attack came alive, but unfortunately the struggles in the air were enough to tank this game away.

This may have been Lamar Jackson’s worst game as a Baltimore Raven. There’s been some stinkers, of course, but they didn’t quite feel like this one. Both of his picks were just bad misreads. Lamar has continually struggled with late hook coverage drops from ILBs and it caught him for a pick-6.

Lamar’s ball security issues also made a comeback. He was stripped of the ball and had two other fumbles, one of which he fell right back on and the other coming on a failed 4th down so it didn’t really matter all that much.

The most frustrating part was that some of the plays Lamar made were incredible. His TD pass to Miles Boykin was perfect, he made a nice touch throw to Hollywood Brown who couldn’t get his feet down (but they connected for a TD on the next play) and he made some very nice plays on the ground. Overall, frustrating is just the best word to describe it, but at the end of the day it began and ended with Lamar. You can’t turn the ball over like that and beat top teams. And Lamar knows it.

Lamar Jackson: "The turnovers I feel are the reason we lost the game. I put that on me."

I never want to see injuries, but one of the silver linings of Mark Ingram missing Sunday’s game is that we got to see a gameplan designed for J.K. Dobbins and Gus Edwards, both of whom have shown a much higher ceiling of playmaking ability this year.

They did not disappoint. The ground game came to life and a lot of it was these two making guys miss and taking those forced missed tackles for extra yardage. It looked like the 2019 Ravens with both RBs ripping off 20+ yard rushes and both having YPC’s over five yards (7.5 for Dobbins and 5.4 for Edwards). One of the biggest upsides is that the rushing game came alive.

The upside was some big plays being made by guys like Willie Snead IV and Devin Duvernay who both brought in 30+ yard passes. However, there was another theme of guys not getting open. I don’t think the play design is doing anyone any favors, but the receivers still struggle to get a step their man.

Miles Boykin was able to make a play and bring in a TD which was much needed for him. He can thank Dez Bryant for the push.

I like to call that the Dez Bryant fuel.

Brown expressed some frustration after the game, and I have to say I agree with him. Your #1 WR has to get more than two targets in a game. You can say ‘well he’s not getting open’, but I find that hard to believe. Sometimes you have to design plays for the #1 and we know Greg Roman can do that – he just didn’t yesterday.

It was a tale of two stories for the offensive line. They looked really good run blocking for the first time all year, but they were awful in pass protection. This is strange, as the pass protection had come along over the past few weeks, but we were waiting for the run blocking to catch up. Ultimately, the Steelers finished the game with 10 QB hits and four sacks, which is just too much, so it drops the grade despite the upside of the run blocking.

Losing Ronnie Stanley for the year is absolutely crushing, but credit goes to Orlando Brown Jr. and D.J. Fluker for getting it done, at least on the ground.

This was a very stout Steelers DL to handle. It’s encouraging that the run game got going, and I expect them to make some strides in pass protection next week, even without Stanley.

The defense was lights out in the first half, but when the Steelers came out in the second and started using spread looks with four WRs, the Ravens really struggled to adjust.

I complimented the Steelers during the game. That type of formation usage really counters what Wink Martindale likes to do. It’s hard to put seven guys on the line and use deceptive blitzes/zone drops when you have players flanked out on both sides of the offensive formation.

@Yoshi2052 and @ColeJacksonRSR called this during the game yesterday. The combination of 01 personnel (0 RB/1 TE/4 WR) and going empty forced the different defensive personnel on the field and limited the Ravens pressures. pic.twitter.com/d34SmVKxCp

The defensive line continues to jell together and is starting to stack impressive games. The Steelers weren’t able to do anything on the ground, to the point where they started running 01 personnel (0 RB 1 TE) in the second half and just went with a spread offense.

Unfortunately the interior group wasn’t able to get much of a pass rush going and that slides the grade down a bit.

Jaylon Ferguson had his best game as a Baltimore Raven. He had a sack, several QB hits and two TFL. He set the edge well and got some pressure. Encouraging to see for the young “Sack Daddy.”

Patrick Queen and the ILBs had a bit more of a quieter game, but with the Steelers playing spread, the Ravens had to adapt their defense and that meant ILB usage dropped.

Yannick Ngakoue had a slow debut, with just one tackle. It can be tough to get going on a new team, so he needs a little time. He did get the change to play 64% of the defensive snaps as Matt Judon left the game after being ejected.

(Oh and on that note, Judon continues to make boneheaded mistakes that hurt the team, so that’s fun.)

I thought the DB group really struggled to adapt to the Steelers’ use of the spread 01 personnel in the second half. There were a few blown coverages, one of which resulted in a walk in TD for Eric Ebron, and the coverage was just generally soft.

Marcus Peters‘ strip fumble was a great play, but other than that the Ravens only registered three pass defenses, and two of them came from Tyus Bowser and Campbell.

Terrell Bonds was picked on all day in the dime, as the Ravens’ depth at corner has dwindled. I know everyone wants to see another trade for a WR, but I won’t be shocked if Eric DeCosta goes and finds a slot CB like Desmond King.

Not much to see here – Justin Tucker booted a 51-yarder, Sam Koch only punted a few times and there weren’t many returns. No mistakes, which is always good.

Coming off the bye week, this is just completely unacceptable. Even the types of penalties make it worse. If guys are just getting beat and having to hold or use pass interference, at least there’s some sort of logic in why they commit the penalty.

However, with the illegal shifts and formation issues where guys are being flagged for literally not being on the line? Like, this is just basic football that they keep messing up. And off they bye?! It’s utterly pitiful to watch.

Oh and for what it’s worth, there’s no way that wasn’t unnecessary roughness on Snead. That’s a straight up shoulder to the head of a defenseless receiver. Officiating isn’t why they lost, but that was a BS call.

J.K. Dobbins. It’s time to roll my guy. Here’s to hoping Dobbins earns the chance to be ‘the guy’ in Baltimore on the ground. His contact balance is next level and he has the juice that Ingram just doesn’t at this point in his career.