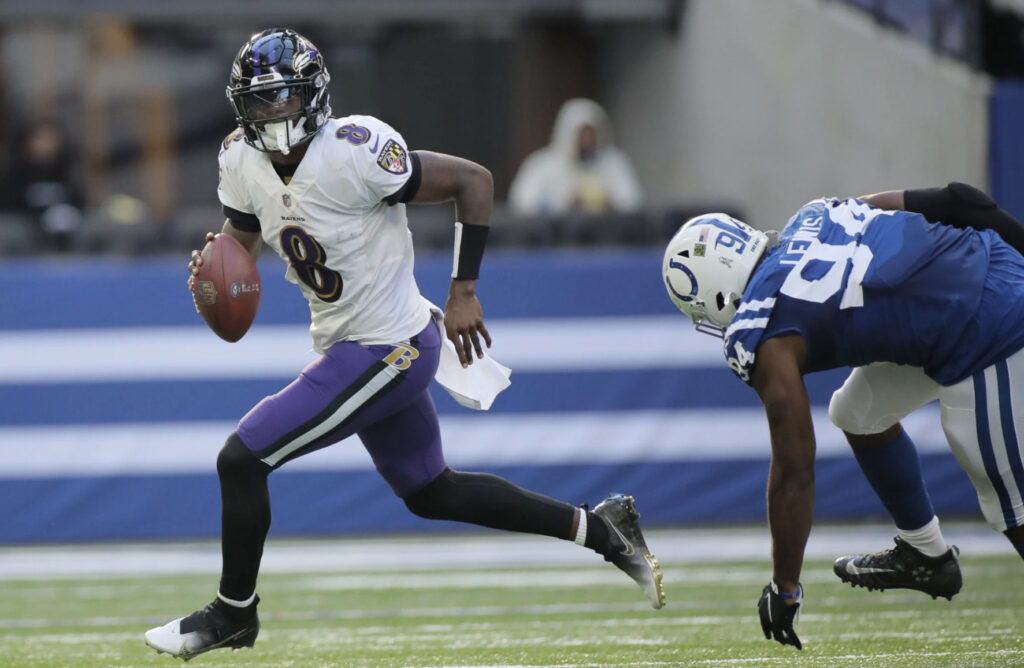 Ravens offensive lineman Patrick Mekari rushed to the defense of quarterback Lamar Jackson after he took a late hit in the helmet by Colts safety Julian Blackmon.

It was a subtle, but revealing moment about how the Ravens are one of the league’s most unified teams.

The Ravens showed character in a 24-10 win over Indianapolis and improved to 6-2 at the midway point of the season. They only need to go 4-4 or perhaps 5-3 the rest of the way to make the playoffs.

“Really a great team win,” Harbaugh said. “The word that was used in the locker room – Eric DeCosta gave it to me – was fortitude. I’m going to look that up shortly here. Nah, I kind of know what it means, but I think that expresses it because it was a tough, tough football game, and it took a lot courage and mental toughness to win that game.”

This victory over Indianapolis felt different because of the adversity facing the Ravens.

The Ravens were missing several key players on both sides of the ball because of injuries.

Then, defensive end Calais Campbell (calf) and cornerback Khalil Dorsey (shoulder) were injured in the first quarter. Dorsey returned but was injured again with just over five minutes left in the game. Campbell did not return, but the injury is not expected to be serious, according to coach John Harbaugh.

Nonetheless, the Ravens backups played at a high level in a stadium where the franchise had never won, going 0-6 since 1996.

The game looked bleak at the half when the Ravens had managed just 55 yards of total offense. They only trailed 10-7 because of another defensive touchdown. This time, safety Chuck Clark returned a fumble 65 yards for the score.

Just as the Ravens appeared to be finally getting on track with their first possession of the third quarter, running back Gus Edwards had an uncharacteristic fumble on the Colts’ 3-yard line and ended a potential scoring drive.

However, cornerback Marcus Peters responded with a bobbling, acrobatic interception that was called incomplete but then overturned after a review. Twitter exploded with Harbaugh’s decision to challenge the play, but that proved to be a game-changing decision.

“I just felt like he had the ball for quite a while, we talked to our guys upstairs, then we saw it on the screen, on the replay screen in the stadium, you could see that he had it for two steps and even a full third step, it looked like,” Harbaugh said. “If not a full third step, it was close, so it was definitely a football act, so he had full possession of it.

“There was no ball movement, no bobbling of it, so by rule, it was a catch. I just congratulate the official, Adrian Hill, the crew and New York if they were involved. I don’t know, but I thought they thought they made the right call by rule. He deserved that interception and they did a good job of overturning it.”

That play led to the Edwards’ touchdown and the Ravens’ first lead, which they never relinquished.

Lamar Jackson shook off a sluggish first half to finish with a game-high 58 yards on 13 carries with the touchdown. He did not have a turnover after throwing two interceptions and fumbling twice last week against the Steelers.

The offense played at a much quicker pace in the second half and that was key for their production.

“Their defense did a pretty good job,” Jackson said. “Coach was calling plays, the guys weren’t open on those plays, and they just did a great job on those. Second half, we just dialed it up, called the plays, found the guys in the right position, and we drove the ball down the field, and we scored touchdowns.”

The Ravens still have some tough games ahead with the Titans and a rematch with the Steelers on Thanksgiving night. The final month of the season is much easier with games against the Cowboys, Browns, Jaguars, Giants and Bengals.

The playoffs are in sight.

On this Monday morning, the Ravens’ bandwagon is full once again.