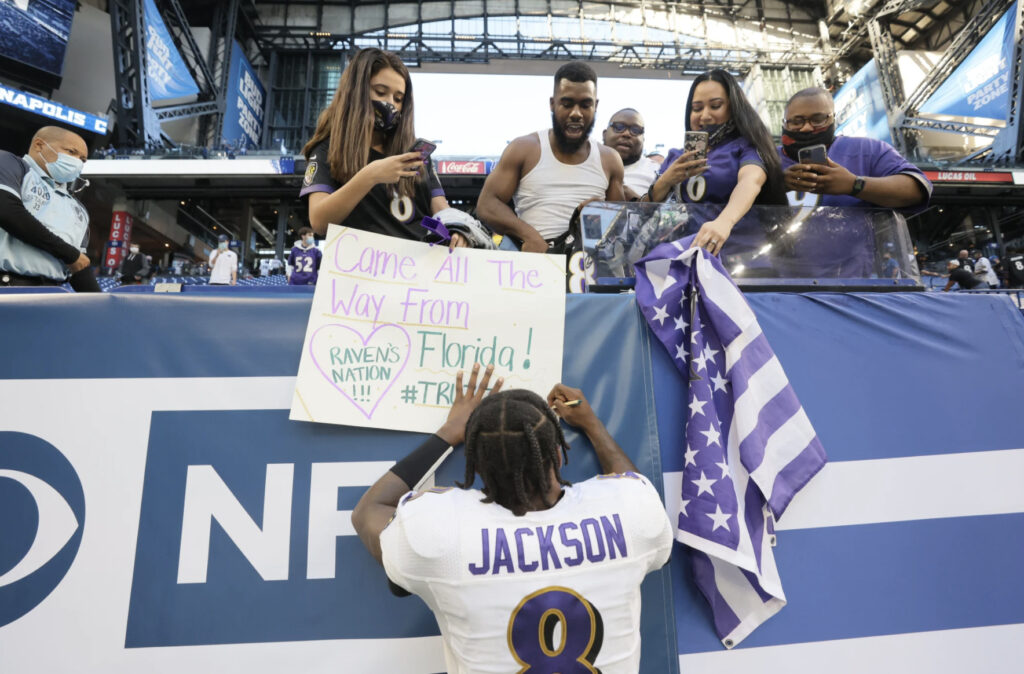 This is exactly the kind of game and kind of win the Ravens lacked last season. The 2019 Ravens coasted through most of their wins, were never forced to make major adjustments, and rarely trailed.

55 total first half yards and the offensive line going from playing inexcusably bad to looking outstanding in the second half; check off the “making adjustments” box.

Sunday was the most impressive Ravens win in a while. Give me a gutsy comeback win after making crucial halftime adjustments against a likely playoff team over a blowout of Cleveland any day.

Here’s who to invest in after the week nine win.

Lamar Jackson was excellent on Sunday with a huge bounce back after last week. He looked as accurate and sharp with his passes as ever and it showed in the final box score. Jackson completed 19 of 23 attempts, including 10 of 10 in the second half. Speaking of the second half, the first drive out of the break was one of the best I’ve seen from the offense all year…until the Gus Edwards fumble of course. I’d rank it right up there with the second-to-final drive last week where nine straight runs got the Ravens inside the Pittsburgh red zone, which coincidentally also ended in a fumble. Jackson now ties Dan Marino for most wins by a QB through their first 30 career starts with 25.

Another thing I liked from Jackson on Sunday was, even though he ran well when he needed to, I felt like he did a better job of escaping pressure while keeping his eyes downfield and completing a pass, whereas in recent weeks he may have just taken off or took his eyes down the second that the pressure was close.

John Harbaugh said he thought this was one of Don Martindale’s best coached games, and I completely agree. His defense was lights out yet again despite the adversity it faced this week. Colts quarterback Philip Rivers said the defense played more Cover-2 as opposed to the man coverage he was expecting, an example of the adjustments made to overcome the loss of Humphrey. Wink’s defense allowed just three points from the first quarter on and only two third down conversions out of 12 tries.

Marcus Peters, Chuck Clark, and Matthew Judon headlined the defensive performance. Peters, who Colts head coach Frank Reich called the league’s best ball hawk, forced two turnovers including a strip of Jonathan Taylor and a controversial interception. Chuck Clark recovered Peters’ strip and returned it for the Ravens’ first score of the afternoon for his first of two fumble recoveries. Matt Judon had seven total tackles to go along with a pass defended and two QB hits.

The offensive line play in the second half saved the whole unit from being in the Stock Down category, but one lineman in particular still made his way here, and his name is Patrick Mekari. Mekari lost his battle with DeForest Buckner on the goal line as Buckner forced Mekari backwards and was able to reach and pry the ball loose from the hands of Edwards, and was constantly getting pushed around in pass protection. The second-year lineman became the starting right guard by default after Tyre Phillips went down last week and continues to get dominated and bullied in every way possible.

Mekari is my only negative takeaway from this one. There’s a lot to feel good about after Sunday. Heading into a bit of a tough stretch the next few weeks, is this the game that gets the Ravens going?