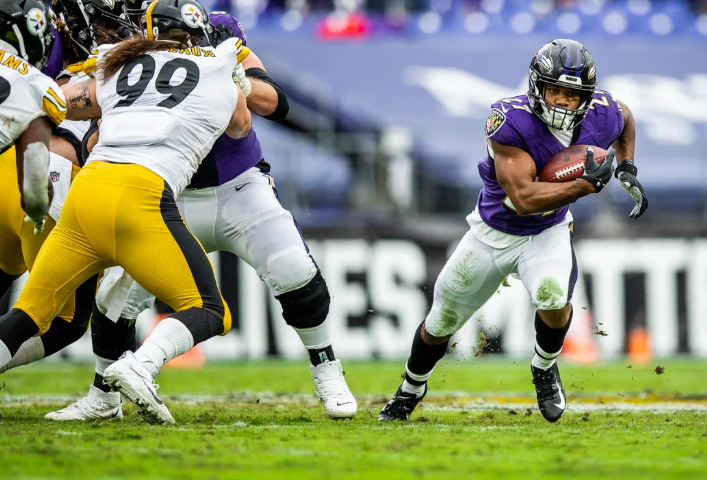 The Ravens are 6-2 at the midpoint of the season for the second straight year.

Their only losses are to the defending Super Bowl champion Kansas City Chiefs and the undefeated Pittsburgh Steelers.

Still, there’s not the same hype surrounding the Ravens compared to last year when there was a constant loop of Lamar Jackson highlights on ESPN and the NFL Network.

Nonetheless, the 2020 Ravens have shown character and “fortitude,” according to general manager Eric DeCosta.

228 total yards, a touchdown, and a W.@Lj_era8 got it done for the Ravens in Week 9! 😈@Ravens | #RavensFlock pic.twitter.com/OYuIEyWMFp

One thing is certain: the Ravens are looking forward and have no interest in any comparisons to last year’s team that went 14-2 in the regular season.

“You take every game and every season as you find it,” Harbaugh said. “It’s different than last year, just like next year will be different than this year. So, it’s really hard to compare. It’s really not worth comparing to last year – not that that’s your question – but we’re just trying to find a way to win the next game, to be honest with you.

“So, any big observations, I’ll leave that to you guys. We’re just trying to figure out how we can improve and just be the best team we can be next Sunday night – that’s really what we have to focus on.”

Still, the Ravens lead the league in rushing for the second consecutive year with Jackson leading the way with 469 yards.

The Ravens currently have the league’s 31st-ranked passing attack, just ahead of the winless Jets.

Opponents have done their homework and are taking away the middle of the field, forcing Jackson to throw outside the numbers — an area where he still struggles.

After a 28-24 loss to the Pittsburgh Steelers where he committed four turnovers, Jackson was widely criticized in the national media for not being able to win a “big game.” That assertion is complete nonsense considering Jackson has gone a record 25-5 in his first 30 games as the starter.

“Lamar, he’s our guy, we’re with him, we’re with him all the way, 100 percent,” Harbaugh said. “We’ve got his back, we believe in him, love him. He’s just that kind of a person, so he gives you everything he has every single week. You’re going to have critics in this league, you’re going to have critics in life. That’s part of it. He understands that he’s really good about that, all of our guys are so that part of it kind of doesn’t really matter.”

Just like last year, the Ravens are viable Super Bowl contenders at the midpoint of the season. The key is for Jackson and the rest of the team to end two consecutive years of playoff frustration where they’ve been one-and-done.

Until that happens, Jackson and the Ravens will have some naysayers — not that any of them are listening.