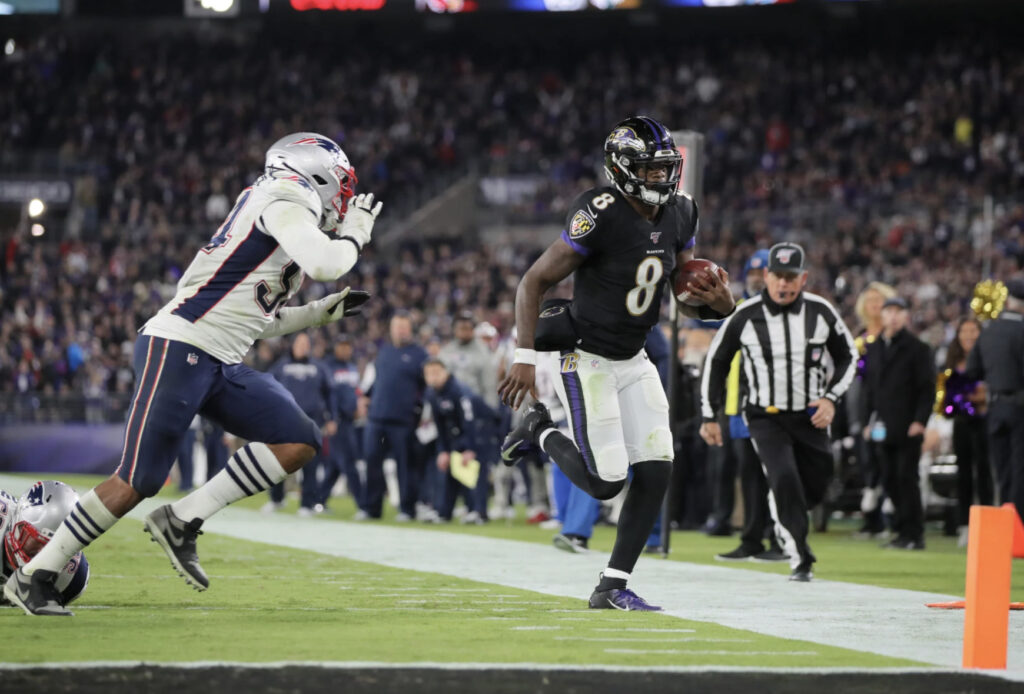 The first half of the Ravens’ Week 9 game against the Colts had fans in a panic. The offense was almost nonexistent. All five of Baltimore’s 1st half drives ended in punts. Against a talented Colts’ defense, nothing seemed to be working. The Ravens were lucky that Chuck Clark returned a Colts’ fumble for a touchdown to keep the game close going into the locker room at half time.

One of the changes that Greg Roman and the rest of the offensive staff made at halftime was implementing more of a quick-hitting passing attack. Lamar Jackson needed help getting into a rhythm in the passing game and Roman helped him find a way to do it. The Ravens increased the pace and moved into a hurry up offense. From the hurry up, the Ravens ran a ton of quick developing play action passes. The defense, wary of the run, is drawn up to the line of scrimmage and Jackson hits quick passes to pick up easy yardage. Against New England, Roman should once again lean on quick passes after run action as the base of the passing game. The second half of the Colts game was one of Jackson’s most efficient halves of the 2020 season.

Roman and the rest of the Ravens’ staff need to build on that against the Patriots.

For the second week in a row, there is drama surrounding the offense. After the Ravens played the Steelers in Week 8, WR Marquise ‘Hollywood’ Brown tweeted a not-so-cryptic message about his lack of targets in the offense. In the aftermath of the Ravens’ up and down win over the Colts in Week 9, Jackson appeared on Rich Eisen’s show and stirred up controversy by telling Eisen that the offense was struggling, in part, because defenses know their plays.

We had to make sure we heard #RavensFlock QB @lj_era8 correctly when he told us why his offense is having a tougher time this year compared to 2019:#NFL pic.twitter.com/s9G7JgtmEA

Much of the drama surrounding the Ravens’ offense is a result of their struggles in the passing game. Despite the drama surrounds the passing game, the Ravens staff and players can’t panic. The one thing that has made Jackson and the Ravens’ offense special is their running game. The 2019 offense didn’t shatter passing records. They are not “The Greatest Show on Turf.” They are not known for spreading defenses out and throwing the ball 50 times a game. They are known for lining up and running straight at defenses. They’re known for Jackson’s running ability. The passing offense undoubtedly has room to improve, but the offense needs to remember who they are.

Against the Patriots, they need to get back to their roots and run the football well. If the Ravens offense can run the ball, dominate the Patriots defense and have fun doing it, there won’t be any drama next week.

At its core, the Ravens’ offense is still a power rushing attack. They attack defenses with a big offensive line that does their best work going forward. Behind that offensive line, Jackson and a stable of RBs run downhill and take control of football games. As a natural reaction to the Ravens’ heavy use of the run, defenses tend to commit more players to the line of scrimmage than they might against other offenses.

The 2020 Ravens’ passing attack has had two primary characteristics. First, the Ravens are using even more play action passing than they did in 2019. Jackson fakes the handoff, defenders move to stop the run and Jackson throws the ball over their heads. Second, the Ravens have thrown a lot of passes in the middle of the field. Whether it is because it best fits Jackson’s arm talent, it goes well with play action, it is where Mark Andrews tends to roam, or a one of a variety of other possible reasons, a large number of Jackson’s throws travel to the middle of the field. To combat these play action passes to the middle of the field, defenses will commit more defenders to the box than they would against an offense with a more wide-open passing attack.

The tendencies of the Ravens’ run game and pass game are going to continue to encourage opposing defensive coordinators to stack the box and crowd the line of scrimmage. Whether it’s because they think the Ravens can’t or they think the Ravens won’t, they aren’t too worried about the deep pass or passes outside the numbers. Roman needs to get ahead of that problem and force defensive coordinators to reconsider. Against the Patriots, Roman needs to draw up a few “shot plays” to receivers like Hollywood Brown, Miles Boykin or even Dez Bryant.

If Jackson can connect with his receivers on a few deep balls, the Ravens might be able to avoid playing against crowded boxes for the rest of the season. 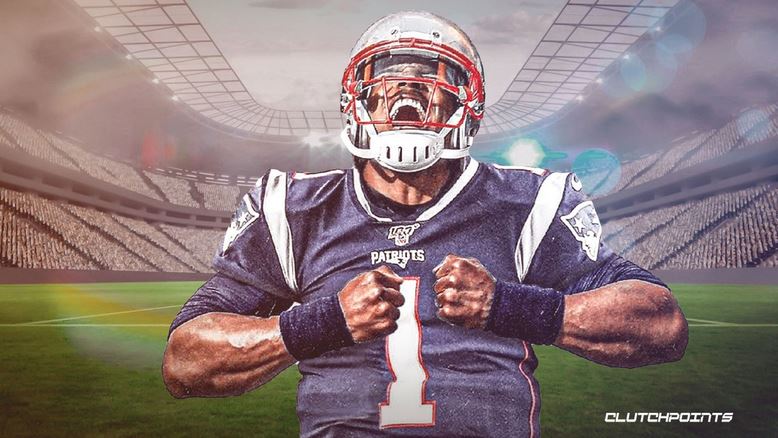 1996 was the Baltimore Ravens’ first season as an NFL franchise. Tom Brady took over as the starting QB of the New England Patriots in 2001. For the vast majority of the Baltimore Ravens’ existence as an NFL franchise, Brady was the face of the New England Patriots. In his time in New England, Brady won six Super Bowl titles, four Super Bowl MVPs and three NFL MVPs on his way to cementing himself as the greatest QB in the history of the game.

After Brady left to start a new chapter with the Tampa Bay Buccaneers in the offseason, New England signed former Panthers QB Cam Newton to compete to be their new starter. Newton, a former MVP himself, quickly won the job. With Newton at the helm, the Patriots are 3-5 and currently sitting at 3rd place in the AFC East. Last week, on Monday Night Football, New England barely snuck by the Joe Flacco-led New York Jets. Unfortunately for the Patriots, Newton’s Patriots simply aren’t Brady’s Patriots.

Cam is dealing with a lack of weapons in New England. Rob Gronkowski is long gone. Julian Edelman isn’t the weapon that he used to be (plus is banged up and hasn’t played since Week 7). Newton doesn’t have the luxury of throwing to a bunch of high round draft picks and big-name free agents. Bill Belichick isn’t naïve enough to think that his 2020 Patriots team can go blow for blow with this year’s version of the Baltimore Ravens. Knowing that he can’t compete with standard tactics, Belichick may break out something innovative on Sunday night. Whether Belichick opens it up or shows off a QB-heavy run game, the Ravens defense has to focus on keeping Newton “bottled up.”

If the Ravens limit Newton, they win the game.

The Patriots leading receivers simply don’t have the ability to compete with the Marlon Humphrey, Marcus Peters and Jimmy Smith for sixty minutes. They’ll undoubtedly make some plays over the course of the game, but they aren’t going to beat the Ravens’ defense.

The Patriots currently rank 28th in the NFL in passing yards per game and 4th in the league in rushing yards per game. There is little reason to think that the Patriots won’t try to deploy a heavy running game against the Ravens. Damien Harris, Newton, Rex Burkhead and Sony Michel all have at least 150 rushing yards so far this year. Because the Ravens’ defensive backs are more than capable of handling the Patriots’ receiving options, Wink Martindale can commit more defenders to stop the run game than he usually would.

Against a limited Patriots’ passing attack, Martindale should keep his coverages basic and load the box.

The 2020 Ravens defense has been fantastic. The defense ranks 8th in yards allowed per game and best in the league in points allowed per game. Led by All-Pro CB Marlon Humphrey, they’re a unit that prides themselves on stripping the opponent of the foot and seemingly have the ability to produce the big turnover at will. Even if they don’t often have to, it feels like the defense can carry the team to wins.

One of the few issues with the Ravens’ defense at this point in the season is injuries. CBs Tavon Young, Iman Marshall, Anthony Averett and Khalil Dorsey have all been lost to injury. The Ravens had to resort to signed 37-year-old free agent Tramon Williams from his couch last week. As a result of a positive Covid-19 test, the Ravens went without Marlon Humphrey in Week 9. In that same game against the Colts, free agent signing Calais Campbell went down with a calf injury that will cause him to miss at least a few games.

With the 71st pick in the 2020 NFL Draft, the Ravens selected Justin Madubuike from Texas A&M. Madubuike is a physical specimen along the defensive line and was expected to play mostly in a reserve role behind Campbell, Derek Wolfe and Brandon Williams this season. As a replacement for Campbell against the Colts, though, Madibuike had a very encouraging day. Madubuike played 24 defensive snaps (his 2nd most this year) and finished the game with five total tackles. He looked good and showed off some of the athleticism that drew the Ravens to him in the draft.

Here’s the Madubuike play chasing down Taylor from behind on the slow screen. Lined up at 3 tech away from the screen, sees it and shows some good acceleration & speed to make the tackle. Madubuike measured 6’ 3” 293 at the combine and ran a 4.83 40. pic.twitter.com/qRp9ASaL3n

With Campbell out again versus the Patriots, the Ravens should give the rookie another heavy workload. Getting Madubuike snaps against the Patriots in prime time will be invaluable in getting him prepared to take meaningful snaps down the stretch and into the playoffs.

Over the first half of the 2020 season, the Ravens struggled to protect Lamar Jackson. Through eight games, Jackson has been sacked 21 times (t-7th most in the NFL). Over the course of the entire 2019 season, he was sacked just 23 times.

The Patriots’ roster lacks the presence of a superstar pass rusher. As a team, New England is towards the very bottom of the NFL in sacks. For the sake of comparison, the Patriots have 11 sacks to the Ravens’ 24. With 2.5 sacks on the year, 2019 3rd round pick Chase Winovich leads the Patriots in sacks. Against the Ravens, Winovich will often find himself lined up across from newly-starting Ravens’ RT D.J. Fluker. Fluker – better known for his work in the run game – against Winovich will be a matchup to watch as the Ravens try to keep Jackson’s jersey clean.