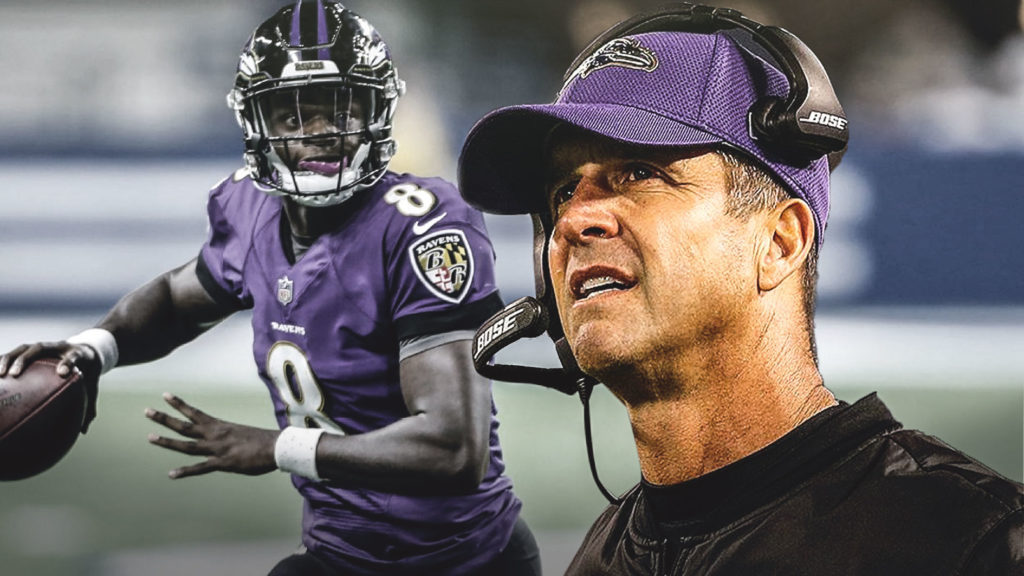 Despite the 2019 season for the Baltimore Ravens ending on a somewhat frustrating note, the vision was clear and as fans, we felt as if we knew exactly who this team was moving forward. With an exotic defense that was strong in the secondary, and a powerful run-first offense that couldn’t be stopped, Ravens fans looked forward to taking things to the next level in 2020, especially with some key additions to a fairly intact squad carrying over.

Yet, despite our adamance that we knew exactly who this team would be in 2020, we find ourselves becoming the antithesis of the late Dennis Green.

“They’re not who we thought they were.”

I’ve truly found myself in the past few weeks asking more questions than anything, most of which we simply cannot answer.

Why does Lamar Jackson look like he’s just not the same quarterback?

Never mind the bare stats that indicate regression (completion percentage, passing yards, touchdowns, yards per carry all trending the wrong way), it’s Lamar’s lack of poise and indecision that has me questioning what’s going on out there, or really, in his head. There’s been some sloppy turnovers from the former MVP this season, and some plays we’ve watched him hold the ball entirely too long, which has led to an avalanche of sacks this season compared to 2019. We’ve also seen Lamar running far less than he used to – a facet of this offense that put the fear of the football Gods into opposing defenses – and there’s been times this season where’s it’s evident that he’s opting not to take wide open running lanes and instead, appears to have his eyes buried downfield, looking for the big plays that just aren’t developing.

Is this just Lamar opting to run less? Or is this something enforced by coaching? Are his mechanics reverting or is his accuracy waning due to lack of trust in his wideouts?

Or maybe it’s none of those factors and it’s all a function of poor offensive line play?

Sticking with the offense…

Why did the Ravens invest high draft capital in a future stud running back… only to run less in 2020?

Overall, the Ravens have run less this year, and it’s both Jackson and the Ravens running backs seeing decreasing touches in the ground game. What makes it more perplexing is that the Ravens went out and used a 2nd round pick on former Buckeye J.K. Dobbins… only to stunt his usage this year.

Understandably, Dobbins wasn’t going to start the year as a lead back, but for the first six games he totaled just 16 carries, despite 126 yards and two scores, with a 7.9 ypc to boot. Mark Ingram went down, and the next couple games, Dobbins amassed 26 carries for 171 yards, good for 6.6 ypc… only to be booted back to a reserve role last week, with five carries on the day against the Patriots.

It’s bad enough that the bread & butter ground game of the Ravens in 2019 has become what feels like an afterthought in 2020, but to complicate matters by under-utilizing a promising young stud in the name of a rotation is both frustrating and confusing at the same time.

On the same note, the usage of the running backs has been generally perplexing. The Ravens don’t look at their trio of Ingram/Edwards/Dobbins and plan to play the hot hand; they simply rotate snaps, series, or quarters. It doesn’t seem to matter who is having the most success (or least) on any given day, as the rotation keeps on keeping on.

Why not play the hot hand and keep them going strong? Why stunt the ground game at all, especially when the aerial assault is largely grounded?

I simply cannot explain it.

One more note on the offense…

What is going on with the wideouts in Baltimore?

I don’t think it’s any stretch of the imagination to say that Ravens fans had high hopes for a more polished and productive Hollywood Brown in 2020, following the removal of that screw in his foot. To say he’s underwhelmed would be an understatement.

Brown has just 32 receptions for 431 yards and two touchdowns this season. Comparatively, last year when he started off slow and hobbled (while missing practices weekly) Brown had 35 receptions for 519 yards and six touchdowns. A few less receptions, but a heavy drop off in yardage and even more so in touchdowns. On top of that, his lack of separation is starting to become concerning for a guy many touted as this speedster that’s supposed to burn defensive backs…

Has Hollywood lost a step? Is coaching to blame for not using him in more creative ways? Or are we simply looking at the Ravens version of John Ross in Cincy?

The rest of the supporting cast at wideout is following suit as well: Miles Boykin is starting to look like a typical Ravens mid-round wide receiver (flashes but never to be counted on beyond depth), Willie Snead is steady but uninspiring, and the rookies in Devin Duvernay and James Proche are hardly used. The Ravens did go out and add Dez Bryant to the Practice Squad, but after using him for just two offensive snaps in his first game against the Colts, Dez hasn’t been called back up to the big boy club.

Is the wide receiver downfall a function of Lamar’s struggles? Is it play calling? Is it stubbornness to not play rookies who could produce at the same level as the likes of Boykin and Snead and Hollywood?

The questions surely aren’t limited to the offense.

Why can the Ravens still not generate pressure?

Yes, we’ve only seen the Ravens defensive stars in the front seven (Calais Campbell, Brandon Williams, Matt Judon, Yannick Ngakoue) in one game together for numerous reasons, but these guys (at least everyone except Williams) should be able to generate pressure without needing that star supporting cast. Much like 2019, Judon is playing down in a contract year, which is such an anomaly in itself. Campbell, who is currently shelved with a calf injury, has made some splashy plays, but his pressures have been limited compared to the expectations when the Ravens traded for him in the offseason. Likewise, the Ravens sent a 3rd rounder and a conditional 4th to the Vikings for Ngakoue, who really hasn’t seemed to be the player we expected we would get. The former Terp has created the occasional pressure and disruption, but he’s not gotten home to the passer to date, and those pressures that lead to turnovers are a big reason why Baltimore ponied up to bring in the star pass rusher for the rest of 2020.

Is the lack of pressure (outside of blitzing) a function of coaching and game planning? Is it simply that these players aren’t quite what they used to be? Has it simply been due to facing some seriously stout offensive lines thus far in the season?

The questions keep rolling with another underlying cause of concern…

Why are there so many injured Ravens this year?

Anybody who follows football knows that a championship is a combination of coaching, skill, a little bit of luck and health. Unfortunately for the Ravens, the latter factor is working heavily against them this season, as the IR list continues to grow:

Ronnie Stanley and Tyre Phillips have been placed on the IR, and have left Baltimore short on the offensive line (which in turn cause a big ol’ shuffle), but Nick Boyle’s blocking ability cannot be understated in that protection and run blocking department either. Then there’s the secondary that’s lost Tavon Young, Iman Marshall, Anthony Averett, Terrell Bonds, Khalil Dorsey… five corners, and four of them were spending time in the slot, leaving the Ravens constantly scrambling to find the next stopgap in the middle of the field.

To compound manners, the current injuries to Jimmy Smith, Campbell, and Williams are huge blow, while Orlando Brown Jr. has been shelved this week as well, putting the offensive line in even more disarray. Without question, it’s been an absolutely disaster season for the Ravens health.

In a league where availability is the best ability, you have to wonder… what is going on in Baltimore? Is it conditioning? Is it Murphy’s Law? Is it just dumb luck?

Whatever is going on with the Ravens this season, I think it’s safe to say our speculations and guess work aren’t going to pinpoint the exact reasons. Surely the franchise from Eric DeCosta on down to the individual players and position coaches are trying to figure out how to turn back time to 2019 and get this offense back on track, how to regain composure and discipline, and find themselves back to their winning ways.