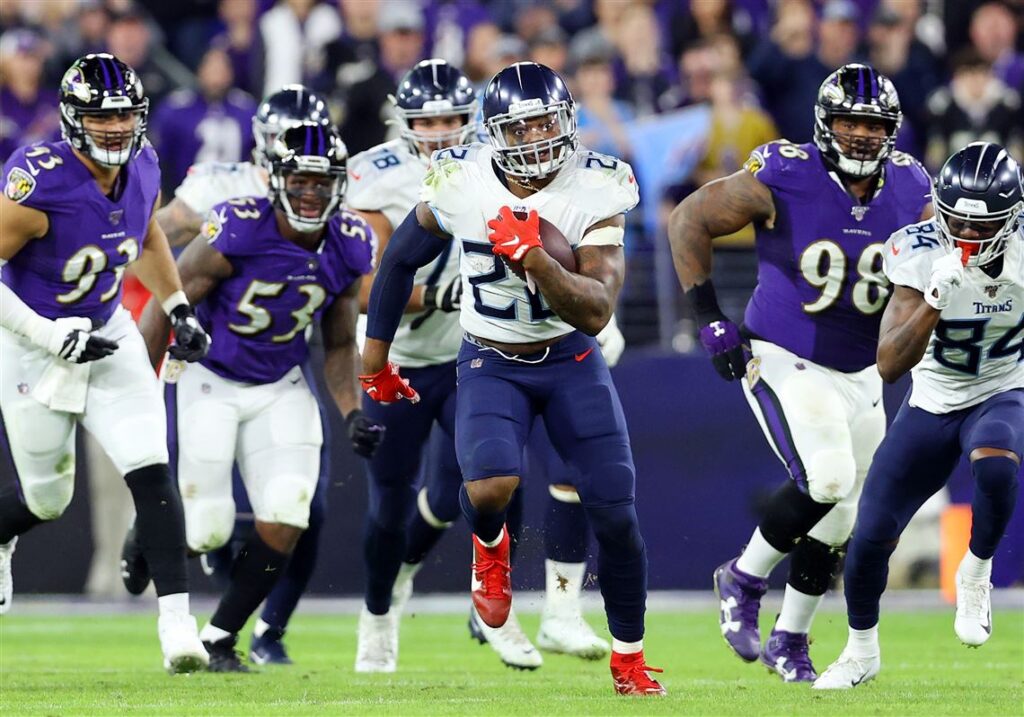 Can the Ravens exact a measure of revenge against Derrick Henry and the Titans? The RSR Staff weighs in with their Bold Predictions on the pending brawl.

Make no mistake about it. For the Ravens, Sunday’s game against the Titans represents a grudge match. Baltimore was slapped around like pee wee ballers in last season’s Divisional Round. They were manhandled and embarrassed. A microcosm of the beatdown is represented in this video.

To prevent more embarrassment the Ravens franchised Matt Judon. They traded for and extended Calais Campbell. Derek Wolfe was signed to beef up the interior defensive line after the signing of Michael Brockers fell through. Significant draft capital was invested in players like Patrick Queen, Malik Harrison, Justin Madubuike and Broderick Washington. And Eric DeCosta traded for Yannick Ngakoue.

Will it make a difference? Will the Ravens be more prepared for Mike Vrabel’s crew than they were 10 months ago?

• The Titans secondary is weak and nicked. They’re also generous, giving up 277 yards per game by air. They are the league’s 28th-ranked defense against the pass. Look for the Ravens to take advantage off of play action on first down. Lamar Jackson will eclipse the 277 mark and post 290 aerial yards and add another 45 by ground. His two TD passes will go to Marquise Brown and Miles Boykin. Dez Bryant will be active and snag 2 passes for 23 yards.

• The Ravens ground game will not be as productive as usual. They average 164 yards per game but on Sunday, they’ll fall about 50 yards short of that. Jeffery Simmons and Daquan Jones will be the disruptive culprits.

• Wink Martindale will challenge the Titans offensive front on first down to force second and long situations. It will work for a while but eventually Derrick Henry will wear down the Ravens defensive tackles. The questionable availability of Calais Campbell and the absence of Brandon Williams will be felt. Henry will rip off some chunk runs on the perimeter. The Ravens edge defenders will fail to contain and that will pressure an unwilling tackler like Marcus Peters. Last season Henry had 195 yards against the Ravens. He won’t reach that mark this week but he will be north of 150 yards with a pair of scores.

• Patrick Queen will lead the team with 1 ½ sacks.

• The Titans are a league best +10 in turnovers. They will take that number to +11 and it will be the difference in the game.

This is the 25th meeting of these teams. Each club has won 10 regular season games and 2 playoff games. Unfortunately, the Titans will make it 13 wins v. Baltimore and the loss will push the Ravens out of the 7th-seed in the race for the playoffs. 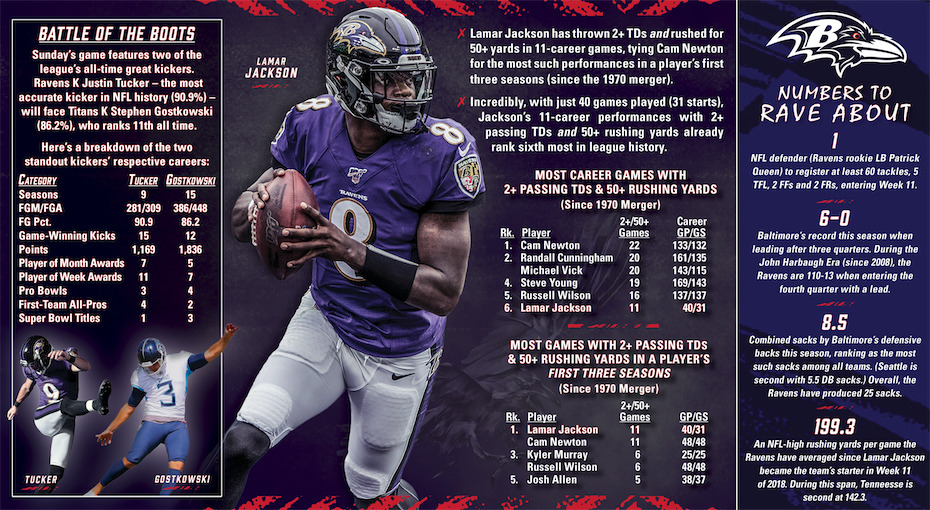 — This game could not have come at a worse time for the Ravens. Injuries to Calais Campbell and Brandon Williams have hampered the defensive line, which could open the door for running back Derrick Henry to have a huge day. Henry ran for 195 yards against the Ravens in the divisional round of the playoffs last season.

— New England’s running back Damien Harris, who is only stating because of an injury to Sony Michel, managed 121 yards against Baltimore last week. Henry is a much more powerful runner and is second in the NFL with 946 yards and eight touchdowns. Expect Henry to get around 30 carries.

—  Patriots quarterback Cam Newton was effective in keeping the Ravens off-balance with play-action. Titans quarterback Ryan Tannehill runs a play-action offense even more effectively and this will be another challenge in this game.

— Tannehill plays an efficient game and will focus on avoiding mistakes to keep Lamar Jackson off the field. Tannehill has thrown for 2,128 yards with 20 touchdowns and three interceptions over nine games.

— Tennesee’s secondary has struggled, allowing 277.4 yards passing per game, which ranks 28th in the NFL. However, Jackson has been inconsistent throwing the ball. Still, the Ravens are going to take shots downfield. If Baltimore loses the turnover battle, the Titans could run them off the field.

— Look for Gus Edwards and J.K. Dobbins to carry most of the load against the Titans, who are ranked 18th in the NFL, allowing 120.7 yards per game. The Ravens should be able to run for more than 100 yards in this game.

— The Ravens injuries will be the difference in this game. Tennessee is going to keep feeding Henry the ball and he will eventually wear down the Ravens’ young players in the front seven.

As the world continues to be blinded by Lamar’s offensive struggles, there’s a gaping hole in the defensive line, we have members of the offensive line receiving death threats on top of injuries, the team can’t keep a backup CB healthy and to no surprise, the WRs corps still sucks.

Calais Campbell was brought in for one reason: to stop King Henry.  He may not even get his chance on Sunday. Derek Wolfe, Justin Ellis and Justin Madubuike are all that stand between Henry and a career ground day. My hope is that Madubuike has been grinding in the shadows waiting for this very moment to shine,  like Michael Pierce did when given an opportunity in the past.

You would think A.J. Brown wouldn’t be as big of a factor this game with Marcus Peters, Marlon Humphrey and possibly Jimmy Smith back on deck. However should Jimmy not be able to go,  Tramon Williams may be thrown out there in hopes that his veteran experience kicks in. With glaring weakness in that area and LBs that struggle to cover,  one has to think this will be a Jonnu Smith type of day. Wink will have to scheme this day more than ever to patchwork shade the gaps in this D.

Did this league just become Major League Soccer? That’s where death threats to players are the most common. Matt Skura and this line have too much on their mind with all of the injuries already to be dealing with nasty hateful fans who couldn’t see the rain on your screen Sunday night. Let’s hope the snaps get better in the future.

When is Dez Bryant coming out? Ms. Cleo told me Sunday. Greg Roman wants to transform this offense. That begins with the X. Whether that is X receiver or Dez, change has to come.

By some miracle the team gets their life together and plugs all of these holes, they can pull out the W. Currently, I unfortunately don’t see that happening. Still rooting for a miracle though.  Heart out of it my prediction is…

Oh and Roman gets fired.

I’ll keep it short and sweet this week. Actually short and bitter. The Ravens injuries will be too severe to overcome this week, mainly Brandon Williams and Calais Campbell. I don’t see how they will stop the run. Derrick Henry will make last year’s playoff performance look like a warm up.

Ok, we need some optimism up in here. We all painfully remember Sunday night in Foxboro, but we also need to remember that the NFL is a week-to-week league, and what happened last week doesn’t have any affect on what will happen this week. One area that isn’t true is when it comes to the injury to Nick Boyle – as a result of that, the Ravens offense will look different on Sunday. Fortunately, the Titans and their 28th-ranked pass defense are exactly what the doctor ordered for a new spread-out Ravens offense.

Also, while the Ravens DL is banged up, so is the Tennessee OL (C Jones, G Saffold, T Kelly all missed practice Wednesday &/or Thursday). While it’s not a complete wash, my feeling is that King Henry doesn’t plow the purple like he did in January. He’ll get his, but won’t wreck the game. L.J. Fort’s return shouldn’t be underestimated.

The Ravens get up early, a la 2019, and force the Titans into comeback mode. That allows Yannick Ngakoue and Matt Judon to get after that patchwork OL and force Tannehill into mistakes, a rarity for the former Dolphin.

Well one thing’s for certain, Vegas still trusts the Ravens. We may not here in Baltimore, but a 6.5-point spread is quite the vote of confidence after what has transpired the past few weeks. I have to think with my head and not my heart here…

As of my writing of this piece, the Titans are getting 64% of the bets and 60% of the money per Action Network. However, the line has stayed relatively stagnant after the initial dip post-Sunday Night Football. If you like to look at the lines as to where Vegas is trying to convince you to push your money, I see them wanting you to pick the Titans. The Ravens were just run over by New England and now get to face Derrick Henry. Recipe for disaster, right? Could be, but Vegas doesn’t seem to think so.

After starting 5-0, the Titans have faltered. They’ve been hit with the injury bug and just haven’t been consistent on defense. The Ravens need (with a capital ‘N’) to get right on offense and if they can’t against Tennessee, we could be looking at a 6-5 football team as we let the tryptophan take hold on Thanksgiving night.

Desperation brings out two possible scenarios here for Baltimore. They’ll either show resilience and show some resemblance to the team we saw last year, or they’ll crumble, let Henry run all over them, and limp into a short week in Pittsburgh. I don’t think there’s a middle ground here.

I’m picking the Ravens for two reasons. First, I think Vegas wants you to go the other way and I like to base a lot of my picks on that thought. Secondly, and maybe this is my heart talking, I do think they have a good offensive game in them and if it’s going to happen, it needs to happen this week, or the season could be in real jeopardy.

I’ll take the Ravens to cover, but barely.

The Ravens offseason moves heading into this season were seemingly a response to not being able to stop Derrick Henry in last year’s playoff defeat. Unfortunately for them, it looks like their big acquisition and one of the league’s best run stuffers of the last decade won’t be present in the rematch with Henry.

Baltimore will be doing some reshuffling on the offensive line again this week, something they’ve done throughout the season and even mid-game. Ben Powers keeps looking good in limited opportunities, Patrick Mekari looked solid in his first career snaps at right tackle, and I’m hoping Matt Skura can bounce back after a rough couple of weeks if he does remain the starter. The good news for this line is that the Tennessee front struggles to bring the pressure, they have the second fewest sacks in the NFL.

• The Ravens offense that has struggled in recent weeks to get a downfield passing game going will be catching a break this week. After matchups with top defenses in Pittsburgh and Indianapolis then playing in some of the worst conditions we’ve ever seen on the road against Bill Belichick, Baltimore faces off against a defense that gives up the 8th most yards per game as well as the 5th most passing yards per game.

• I’m going to predict one of Jackson’s best games of the year against a suspect pass rush and lackluster pass defense. While the combination of Marlon Humphrey and Marcus Peters will shut down A.J. Brown, Derrick Henry runs wild with at least 150 yards and a score.