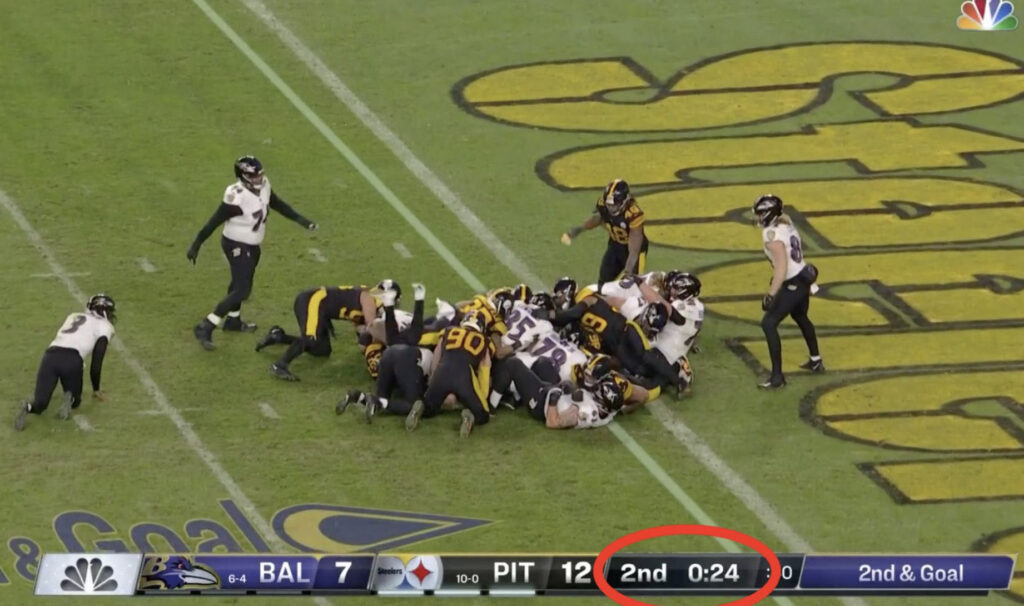 The Ravens fell in Pittsburgh, 19-14. RSR staff react to the loss here…

Crazy thing is, I feel better about the balance of the Ravens season after losing this game than before it was played. #character #grit

And then, the defense did exactly what they did vs. Tennessee: crumbled in the most crucial moments to end the game. Then again, look at TOP and realize how gassed this unit was and I’m genuinely not angry.

Offensively it’s really whatever. Bob looked rough. Trace McSorley had ONE very good pass but otherwise didn’t look like an NFL-caliber QB. The backup OL was largely woof (sans TCC who was solid), and receivers still can’t find space. With all of that said, this was a Luke Willson drop away from a Ravens win. Given how the last 10 days have gone, if anybody should be hanging their heads it should be the Steelers…

…and the officials who let the Steelers lie on the field for 20 seconds to end the first half without penalty (which 100% should’ve been penalized for delay of game).

We knew what this game would be. The #Ravens nearly pulled out the unthinkable. You have to hope this is a springboard game. Need to get Lamar back. This defense can’t do it alone. Offense has to play much better going forward. This passing game isn’t cutting it. #RavensFlock

This. It’s so frustrating. The amount of 1st down runs, the lack of any shots downfield. The Steelers take 3-4 shots in 3 quarters and get one long PI. https://t.co/18Fs5GcPtt

Wrinkles I liked from Wink today:
– Saw the 3-man rush. Normally, we all hate it but with Yannick rushing wide, it’s more effective
– Inverted coverages with the CBs playing deep responsibility

If this D can get healthy & Jimmy Smith doesn’t miss time, upside is there. #Ravens

I mean, of course they would keep us biting our nails until the very end, right?

A valiant effort, but it was just too much to overcome in the end. This was a prototypical Harbaugh-team effort – the Ravens are never to be counted out when they are huge underdogs (of course, the flip side of that is that they have unfortunately fallen flat when big favorites – especially in the postseason). If not for some borderline illegal gamesmanship by Pittsburgh to end the first half (paired with some boneheaded clock management), the Ravens actually could have led 14-12 at the half. At the worst, it should have been a 12-10 deficit. Those points would end up looming large!

Believe they snapped the ball with 4 seconds pic.twitter.com/1t7fRMM32S

RG3 turned it over twice in the first quarter, including a pick six. He had a nice run to help set up the aforementioned goalline fail, but once it was apparent that the Ravens couldn’t move the ball through the air AT ALL, it seemed like the Steelers realized all they had to do to get the W was not screw up. The move to Trace McSorley probably could have come sooner, but the guy hadn’t practiced since mid-November. His first NFL TD pass, which Marquise “Florida Man” Brown took 70 yards to the house, was a sight for sore eyes. Hopefully that gets Brown some confidence and we are calling him “Hollywood” again here soon. The crucial third-down conversion Pittsburgh managed just ahead of the two-minute warning…well, it felt pretty perfect for 2020, no?

Some silver linings – and there were a bunch – were the efforts by the called-up practice squad/waiver guys, like Davontae Harris, who caused a fumble on special teams leading to the Ravens’ first TD. Another bright spot was Trystan Colon-Castillo, an undrafted lineman from Missouri, who filled in at center. He didn’t have any snaps to nowhere, and paved the way nicely on Gus Edwards‘ TD. With D.J. Fluker continually getting banged up, forcing fellow rookie Tyre Phillips out to tackle, and the already-revolving door at center, perhaps the kid gets some more looks. Justice Hill had some nice runs, and showed impressive burst and change-of-direction. Maybe lining him up at WR and trying to get him the ball in space a bit more could be an idea going forward?

It’s been a rough ~month for the Ravens, and for us fans. The good news is that the schedule softens considerably down the stretch. The first order of business is getting prayers up for all the players who tested positive for COVID-19. Here’s to quick and uneventful recoveries for all.

Harbaugh said the players who are sick are doing well. "There's a lot of challenges with this thing. It hits guys in different ways. We just want everybody to get healthy."

Assuming good news on that front, the postseason is still a very real possibility, especially if we see the kind of all-around effort we did today (which wasn’t there for much of the season, and certainly wasn’t against Tennessee or New England).

All things considered the Ravens played admirably and kept this game close. The defense, even with that many men out of the game, kept the Steelers offense from getting into any rhythm. The Ravens’ schedule for the next six weeks is as easy as they could hope for.

It’s all about hitting your stride late in the season and the Ravens still have that chance.

Absolutely loved the fight we all saw from this team. In one of the craziest games ever with a roster missing multiple starters on both sides of the ball, including the MVP QB, the Ravens not only covered the 10-point spread but looked good doing it. The defense that was without three key starters held the 10-0 Steelers to just 13 points and overcame bad starting field position thanks to some RG3 turnovers and multiple threes-and-out.

I think the two big things we learned here are just how important Lamar Jackson is to this offense, and that Pittsburgh will not be able to hang with Kansas City when/if they meet in the playoffs.

The Ravens played about as well as you could’ve expected, and on defense, they were even better. Baltimore really stymied a strong Steelers offense to give themselves life late.

– Marlon Humphrey was phenomenal in my eyes, as were the safeties. The run defense was surprisingly stout.

– RGIII was probably slightly worse than I thought he’d be, but he did run the ball well. I thought we’d see more Gus Edwards, but Hill was decent, as well.

– Hollywood made a nice play on Trace McSorley’s first TD.

Baltimore keeping this close could be a rallying cry for a team on the fence.