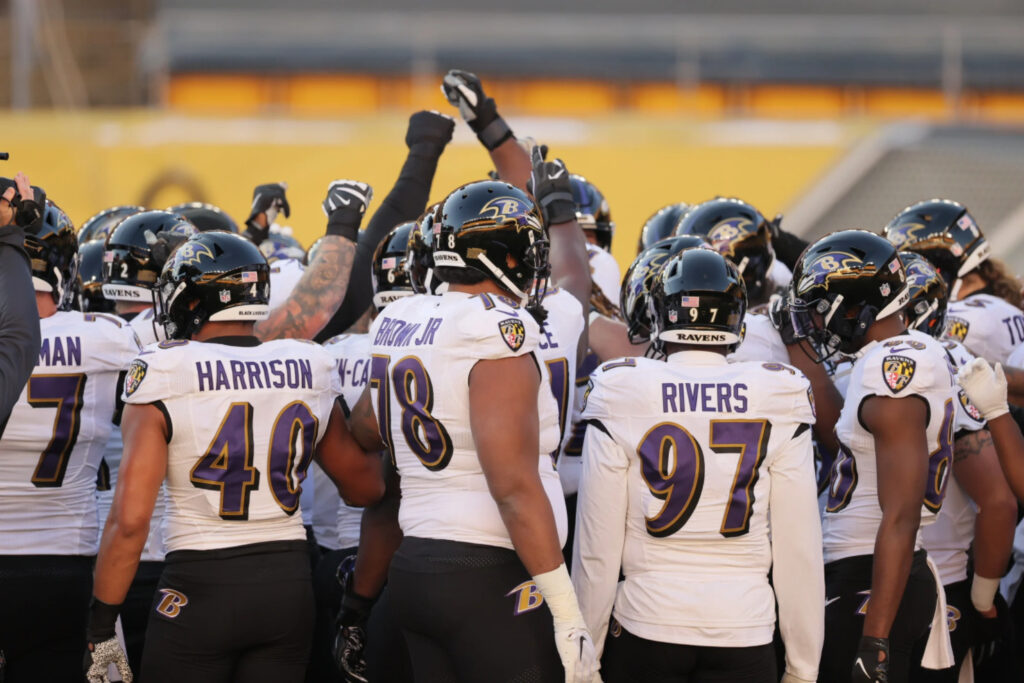 It’s been said that a man isn’t defined by his level of success, but instead by the way in which he handles adversity. And the Baltimore Ravens, to a man and as a team, entered Heinz Field for a rare Wednesday afternoon start, in the midst of arguably their most adverse times in franchise history.

And they emerged as winners.

No, they didn’t win the game, but they may have won something more — something with greater staying power. Something that they can build upon for the balance of this tumultuous 2020 season, and perhaps even beyond.

After 10, long agonizing COVID-19-laced days since their brutal overtime loss to the Titans that placed the players and their respective families at risk, the Ravens proved that when they come together as one, anything is possible – even the seemingly impossible can be attained through grit, determination and an insatiable thirst to compete. The 2020 Ravens walked away from Heinz Field last night as a more galvanized team than ever before, and such a singularity in focus can enable future achievement.

Yes Virginia, there are moral victories in football. The importance of such victories is measured by the way a team carries their inherent lessons forward. Time will tell for these Baltimore Ravens.

As for the Good, Bad & Ugly, this edition will be graded with a curve. When a team is down 13 starters, including the league’s reigning MVP, an All Pro tackle, a Pro Bowl tight end and fullback, their best running back, a huge component of their rushing attack in the form of TE Nick Boyle, their most reliable receiver, 3 Pro Bowl defenders, a long snapper, while featuring a patchwork offensive line and they still compete with the NFL’s only undefeated team on their turf, a curve is earned.

Robert Griffin, III deserves credit for his toughness and willingness to fight through a hamstring injury in order to stay on the field and give his team a chance to win. As a runner he was effective and showed patience when navigating behind his offensive line. He had 68 yards on 7 carries including a 39-yard gallop…Trace McSorley was thrown into the proverbial lion’s den without a sword. He took over for the injured Griffin in the fourth quarter and showed some moxie and poise while bringing the Ravens to within one score following a nice 70-yard pitch-catch-run connection with Marquise Brown…Justice Hill produced some tough yards without much space to maneuver…the offensive line moved in unison when asked to make plays in space, quite an accomplishment given that they had not seen live reps together as a unit. Overall it was a plus effort for Joe D’Alessandris’ group, particularly with their coach back home in Baltimore with COVID-19 issues.

Throughout the 2020 campaign, the Ravens defense, time and time again, has disappointed in clutch situations. In this game they delivered regularly when it counted the most, save the pass from Ben Roethlisberger to James Washington on third-and-6 from the Steelers 17 at the 2:42 mark of the fourth quarter. It went for 16 yards and for all intents and purposes, it represented the final dagger in the Ravens quest for an upset victory. But Wink Martindale’s unit kept hope alive for the Ravens limiting the Steelers to 6 of 14 on third down attempts, 0 for 2 on fourth down tries and they kept the league’s 7th-best red zone offense out of the end zone three times out of four…Marlon Humphrey was aggressive in coverage (too aggressive on the DPI) and had two key PD’s while forcing 2 fumbles, although both went out of bounds…Chuck Clark was a solid tackler throughout, limiting the Steelers to very modest yards-after-catch. He had 13 tackles…Marcus Peters at times, gave up too much cushion but he competed well, had two PD’s and shook off an in-game injury to re-take the field to help a secondary that lost Jimmy Smith during the game. DeShon Elliott should be credited for the same…L.J. Fort exhibited sure tackling…

Tyus Bowser was menacing as a pass rusher and had an interception in the end zone, after which he should have taken a knee. He did struggle to hold the edge in run support in the second half. He looked a bit gassed after his heavier than usual workload…37-year-old Tramon Williams played 45 snaps and held his own as the nickel corner. He was also effective as a blitzer…Give credit to Davontae Harris and Anthony Levine, Sr. for the forced fumble and recovery at the 4:41 mark of the first quarter. 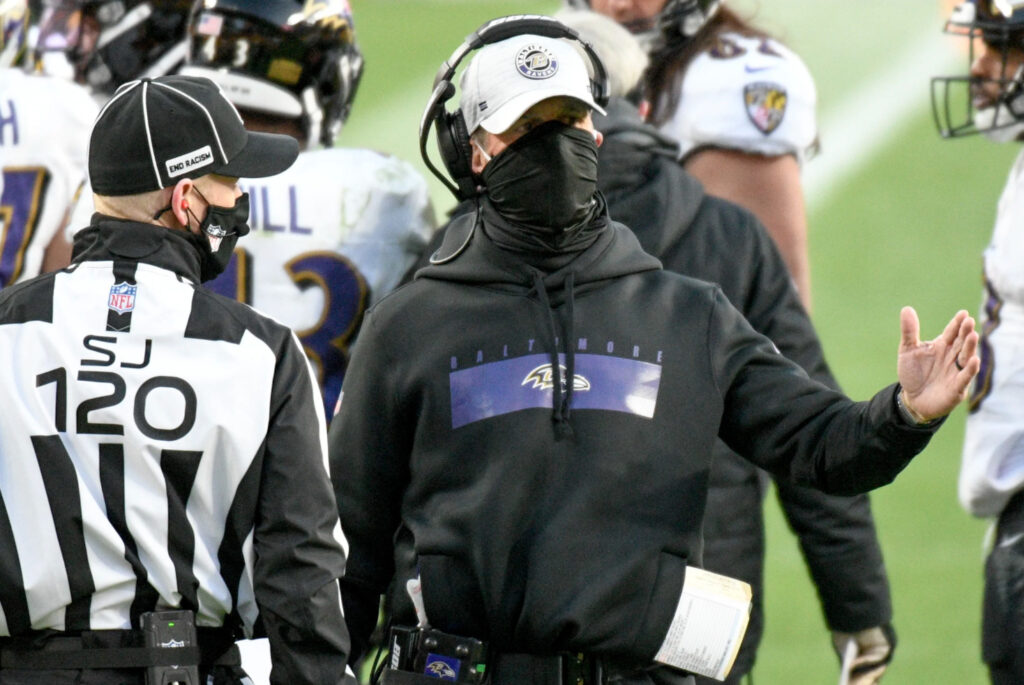 The Ravens added to their reputation as a penalty prone team, outpacing the Steelers 40 yards of yellow laundry with 86 of their own. Ronald Torbert’s crew was awful. It’s not often when the former referee turned broadcaster disagrees with the calls on the field so regularly but yesterday, that’s exactly what happened with NBC’s Terry McAulay…Griffin was a disappointment as a pocket passer. He was 7 of 12 for 33 yards and gave up the pick six to Joe Haden on a pass that was thrown far too late. That was a pattern for Griffin who had two first quarter turnovers in the span of just four plays…Gus Edwards had just 10 yards on 9 carries. The north-south runner has had success against the Steelers in the past and it was a bit of a surprise that Greg Roman didn’t call Gus’ number more often…speaking of Roman, the play calling was weak again. Granted, Roman wasn’t playing with a regular complement of players but he called a game that was far too close to the vest and it enabled the Steelers defense to shrink the field. You see the Steelers using bunches, rubs, crossers and slants to create separation and give Roethlisberger a chance to get the ball out quickly. The Ravens do none of that. Sometimes I wonder if Roman knows what a screen pass is…Tyre Phillips let T.J. Watt run unabated to the quarterback, instead opting to double up with right guard Ben Powers on a safety blitz? C’mon man! Instead of celebrating like he just won a Super Bowl, Watt should have shaken Phillips’ hand and said, “Thank you!”

The sequence of plays and clock management following Justice Hill’s 19 yard run to the Steelers 4 yard line at the 1:03 mark of the second quarter should show up one day in an NFL blooper reel. To come away from that situation without a point was beyond embarrassing. And Luke Willson, catch the damn ball!…the Ravens had nearly as many penalty yards (86) as they did net passing yards (90). 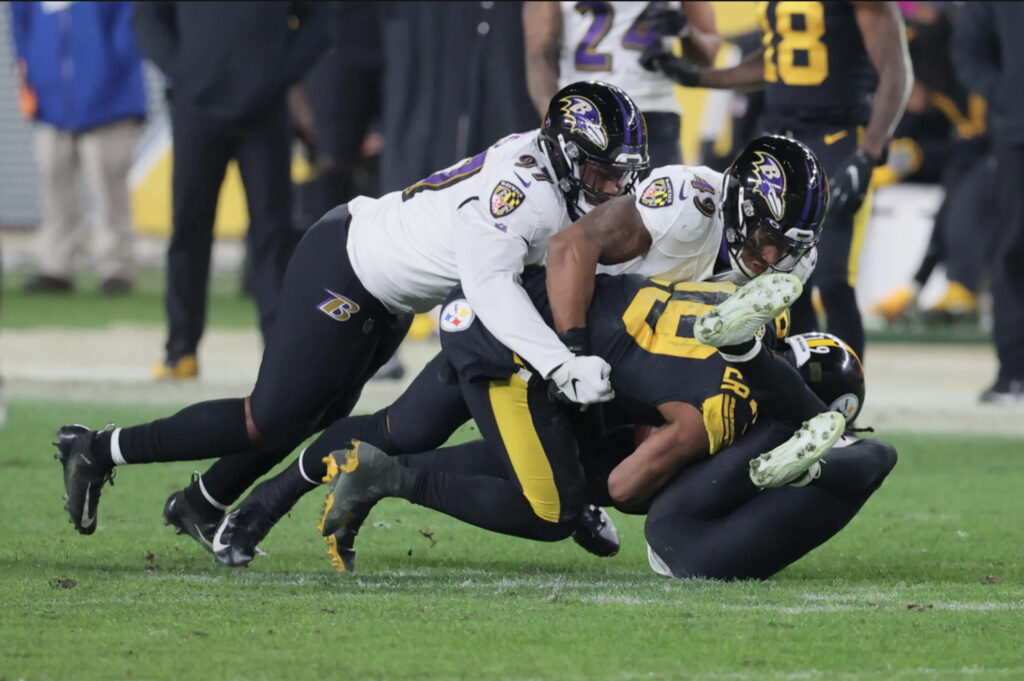 Imagine the chaos at Ravens headquarters for the past 10 days. Imagine the angst among the players and their families. Imagine boarding a plane for work, not knowing if upon landing that you might test positive for COVID-19. Imagine how that might affect your outlook on your job, much less doing it well. Imagine the lack of meaningful practices for 10 days while preparing to go on the road with severe roster limitations – unprecedented if you will, to face a 10-0 Steelers team. And then imagine that you were one play away from possessing the ball with an opportunity to win the game.

That was the Ravens on December 2, 2020, the same day that a street was named in Mo Gaba’s honor.

Mo was all about the team and there’s little doubt that he would have been proud of his favorite during Wednesday Afternoon Football. The Ravens showed what they’re made of, as a team. And as a team, they get this week’s Mo Gaba.

This loss, this effort, may very well be the season’s defining moment. And despite all of the obstacles that might tell us otherwise, it could launch John Harbaugh & Co. into a successful run through December.

Somewhere beyond, Mo is smiling.

“Mo Strong is a way of life… and now it’s a Way in Baltimore.” Today Mo Gaba Way was unveiled on W. West St., a street that leads to the @Ravens Stadium @WMAR2News pic.twitter.com/hYCiXAFWdY