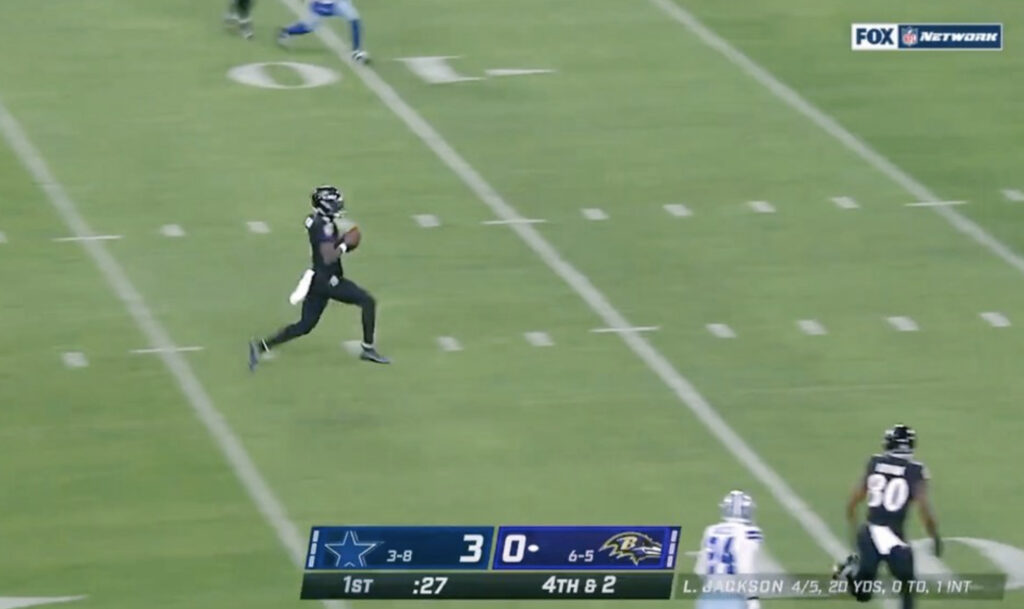 Fun football! It was a little hairier than the final score indicated – if both teams were perfect on field goals, it would have been more like 36-26 – but nearly 300 yards rushing is a great way to bounce back.

If I were to nitpick, I’d talk about the lack of pressure on Andy Dalton, and Harbs’ inability to throw the red challenge flag on not one but TWO clear opportunities on Dallas’ final TD drive, which could have been important if their defense could do anything right.

Let’s be clear: the Ravens played a solid game, especially considering the amount of players slowly coming off the COVID/Reserve List in the past four days, with minimal practice in the past two weeks.

That being said, this could have been a much wider margin in a true blowout. Lamar Jackson missed an easy touchdown to Miles Boykin, along with a few other errant passes. Marquise Brown didn’t help with his early play when he ran backwards to avoid contact, then barely waved at the next pass that was inevitably picked off.

Defensively, the Ravens have too much star power to be so inept in the pass rush, which managed just a single sack on the night. It needs fixed pronto.

Also seeing Andy Dalton pick on Anthony Averrett and Marcus Peters all night was a bit frustrating to see, but again – no pressure makes it easier on Dalton to do so. Throw in a missed Tucker FG & what should’ve been an L.J. Fort interception, and this could’ve been 44-10, easily.

Regardless, the Ravens should feel good. Got some of that mojo back & hopefully next week they get some key players back just in time for a huge matchup with the Browns.

Dallas hung around longer than expected, but I underestimated Andy Dalton’s leadership and ability to lead an offense. In that respect, hats off to Dallas. Lamar looked good, all things considered. He looked very comfortable in the pocket under pressure and that TD to Hollywood was a thing of beauty. He needs to cut out the sidearm crap. He ain’t Pat Mahomes. I’m willing to chalk up the defense’s lackluster-ness to fatigue.

With Cleveland’s hot offense looming in the near future, the pass rush doesn’t have much time to fix the mistakes.

J.K. Dobbins and Gus are better than Mark Ingram; there’s just no way around that. Ingram should be saved for the second half when defenses are tired, to go to work. The offensive line has made very clear improvements since Ronnie Stanley’s injury.

I was very pleased with them this week. The designed rollout plays on the goal line suck and need to be removed from the playbook.

I think that missing last week’s game might have been a good thing for Lamar Jackson. This looked like it’s the most fun he’s had all season and he played well. Not to mention all of the practice time that he and many other key players have missed.

Could the Ravens be getting hot at the right time? Yes it was a weak Dallas team but this was a very encouraging game. Next week will be the real test.

Dallas hung around more than I thought they would — they moved the ball better too — but ultimately they were no match for the Ravens.

– Some people might try to critique Lamar tonight, but I thought he was outstanding. He was clinical with his legs and showed great poise in the pocket, capping off a great game with an absolute dime to Hollywood on an ad-libbed play.

– Speaking of Hollywood, he continues to be up and down. The potential is certainly there, but he occasionally shows a lack of effort. If he can cut down on the bad and build on confidence that’s surely going, Baltimore might still have something there.

– The defense really needs to sort out a pass rush that should’ve improved dramatically with the addition of Yannick Ngakoue. Unfortunately, it hasn’t, and they couldn’t get to Dalton much despite facing a beaten-up Cowboys O-Line.

– My key takeaway from the game is that the Ravens may have found their identity in this game, riding the backs of Gus Edwards and Dobbins. They must continue to do that if they’re going to make a deep playoff run. It makes Lamar’s job that much easier.

Prayers out to Dez Bryant. Football and antics aside, let’s hope he’s healthy!

Although inconsistent, it was a great game from Lamar Jackson. He escaped pressure and scrambled well and his touchdown to Hollywood was a thing of beauty.

– The running back splits are finally starting to shake out the way I think we all wanted with Dobbins leading the way, Gus not far behind, and Ingram third on the totem pole. The group did what they should have against a poor rush defense with nearly 300 yards.

– The pass rush in a plus matchup was suspect at best. Pressure started to get home near the end of the game but Andy Dalton faced little to no pressure for the majority of it. Yannick Ngakoue hasn’t wowed me so far, but it’s not his fault that he’s faced a string of offenses with either good offensive lines or QBs that get the ball out quick, which Dalton did tonight.

– The most exciting and inspiring thing for me to look at moving forward was the offense’s mix of run and pass and the execution all-around. It’s similar to what we saw in 2019, and there isn’t a better time than right now for this offense to reach its full potential.