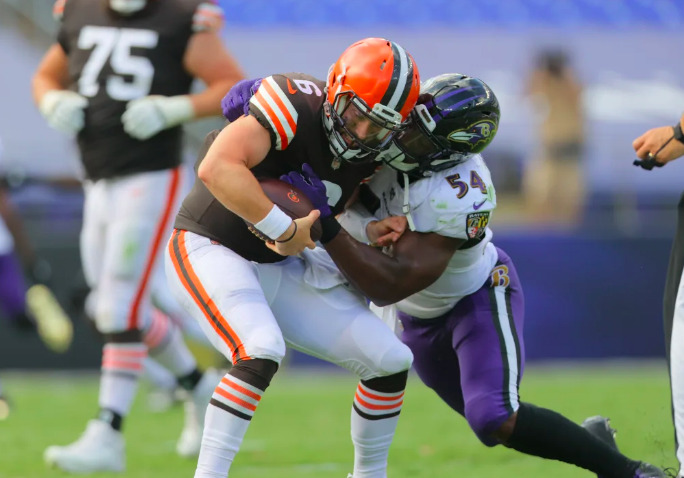 In the minds of many football fans, Lamar Jackson already rivals Michael Vick as the most talented running QB in the history of the NFL. In 2018, Jackson broke the record for rushing attempts by a QB in a single season. In 2019, Jackson broke his own record. In that 2019 NFL MVP season, Jackson also broke Vick’s record for most rushing yards by a QB in a single season. I expect that, when his career is over, there will be little debate over whether Jackson stands alone as the best “dual threat” QB to ever play the game. He has proven that he is certainly no RB, but Jackson’s legs are what make him a special QB.

The Cleveland Browns are, on paper, the toughest remaining opponent on the Ravens’ 2020 regular season schedule. Their offense is firing on all cylinders and the Ravens can’t afford to hold back if they hope to keep the pace. On Tuesday night football against the Cowboys, Jackson carried the ball 13 times for 94 yards and one touchdown. The touchdown, a long burst up the middle, was a stunning example of just how dangerous Jackson can be with his legs.

If they hope to be their best, Greg Roman and the Ravens need to let Jackson run on Monday night.

Statistically, Jackson’s best game as a passer came against the Browns in Week 1. The Ravens’ QB completed 80% of his passes for 275 yards and three TDs. Not so coincidentally, Week 1 was also Ravens’ WR Marquise Brown’s best game of the 2020 season. Brown finished the game with five receptions for 101 yards, and looked like he might be ready to live up to his first-round pedigree. With Cleveland safety Andrew Sendejo in coverage, Jackson hit Brown near the left sideline on a pass that traveled 50 yards through the air.

Jackson’s big throw to Brown against Cleveland in Week 1, officially a 47-yard gain, is his longest completion of the 2020 season. Trying to recreate the magic by attacking Sendejo in coverage this week is one of my keys to the game for Baltimore. Sendejo is not one of the best cover safeties in the NFL.

If the Ravens can isolate Sendejo in coverage against Brown or Devin Duvernay, they may be able to find a few big plays through the air.

The Ravens’ offensive performance against the Cowboys on Tuesday night was one of their best of the season. The Cowboys’ defense is one of the worst units in league, but it was still a relief to Ravens’ fans everywhere to watch the offense put together an inspiring performance. Jackson had a few misfires, but had an efficient performance as a passer (12 of 17, 107 yards, 2 TD, 1 INT). After weeks of criticism over their disappointing lack of production this season, Brown and Miles Boykin each hauled in key confidence-boosting TDs. Gus Edwards carried the balled seven times for 101 yards (an incredible 14.4 yards per carry). J.K. Dobbins added 71 yards on 11 carries.

An efficient passing game on limited attempts. An extraordinarily successful rushing attack with multiple contributors. Explosive plays on the ground by Jackson. Much of what the Ravens showed on Tuesday were the same things that were the hallmarks of their 2019 offense. In a virtually “must win” game against the Browns, the Ravens’ best chance for success hinges on their willingness and ability to get back to their “old ways.” 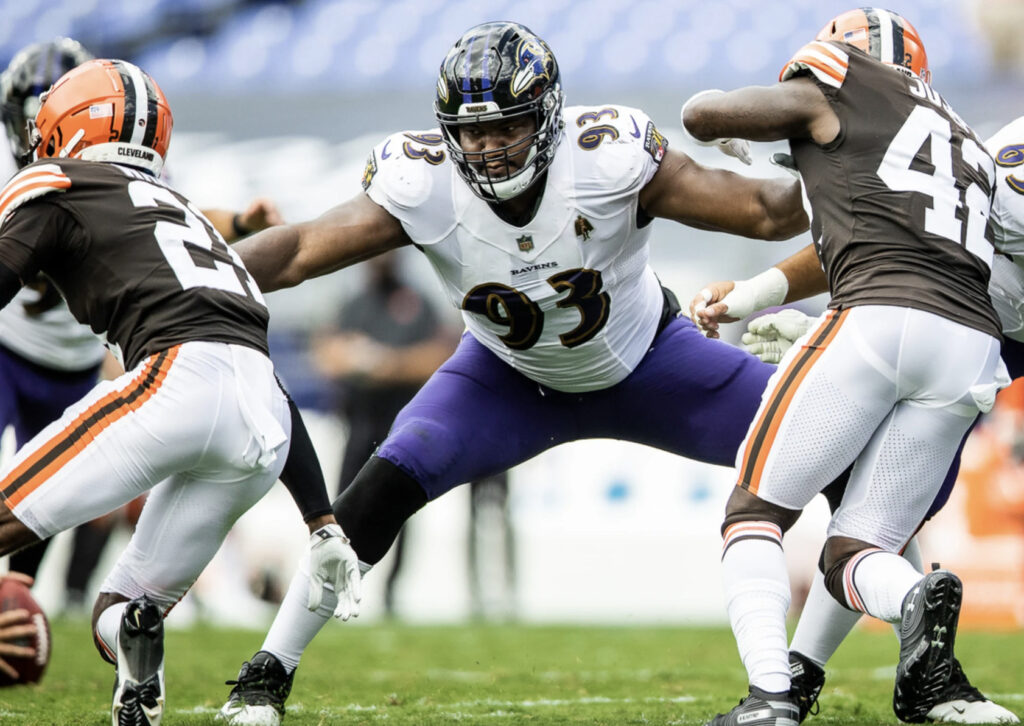 There is no doubt about it: stopping the run is Ravens’ number one key in their showdown against the Browns on Monday Night Football.

The 9-3 Browns enter Week 14 of the season with one of the best rushing attacks in the entire league. Trailing only the Ravens and the Patriots, the Browns rank 3rd in the NFL in rushing yards. Their two-headed backfield monster comprised of Nick Chubb and Kareem Hunt can make a fantastic argument for the title of the NFL’s best RB duo. Chubb, who has missed four games due to injury, still ranks 5th in the league in rushing yards. Hunt, Chubb’s understudy, ranks 10th. Each of Cleveland’s top two backs rank in the top 15 in rushing first downs.

Unfortunately for their opponents, the Browns have built an offensive line worthy of blocking for such talented backs. LT Jedrick Wills was the Browns’ 1st round pick in the 2020 NFL Draft. LG Joel Bitonio, who recently signed a long-term deal, was their 2nd round pick in 2014. C J.C. Tretter has signed two generous three-year deals with the Browns after starting his career in Green Bay. Cleveland acquired starting RG Wyatt Teller, who has played very well in 2020, in a trade with the Bills this offseason. Starting at RT for the Browns is Jack Conklin. Conklin, the 8th overall pick of the Titans in 2016, signed a three-year, $42 million deal in March. The Browns investments have resulted in them having one of the better offensive lines in the NFL.

The Ravens absolutely must commit to slowing down Cleveland’s running game down. Wink Martindale needs to stack the box with defensive linemen and linebackers to limit Chubb and Hunt’s ability to get to the second level. Both backs are dangerous when they get into the open field in one on one situations with defenders. The Browns are a good football team. They may beat the Ravens. But the Ravens defense can help their teams cause by making absolutely sure that they don’t lose because Chubb and Hunt combine for 200 yards on the ground.

Match Up with Landry

The Browns are going to run the ball a lot. It’s no secret that a dominant run game is what makes their offense tick. Unfortunately for the Ravens though, the Browns passing game might be the part of Cleveland’s offense that is peaking right now. While his 2020 statistics haven’t been bad, Baker Mayfield’s best game of the season came against the Titans last week. In an important game against a very good Tennessee team, Mayfield completed 25 of his 33 pass attempts (75.8%) for 334 yards and four TDs. He threw no interceptions and finished the game with a 147.0 passer rating.

Since losing Odell Beckham Jr. to a season ending injury, Jarvis Landry has stepped in as Mayfield’s top target. Landry is averaging 12.5 yards per catch on 54 receptions in 2020. Against the Titans, Landry brought in eight passes for 62 yards and a TD. Landry wasn’t the big play guy, but he was on the receiving end of nearly a third of Mayfield’s completions.

Due to the quality of their cornerbacks, the Ravens rarely have their corners follow the opponents’ top WR wherever they go on the field. Martindale may consider handling the Browns a little differently. The defense’s top priority is stopping the run. If the Ravens can also limit the damage that Landry can do, they could really hurt Cleveland’s offense. The best way to accomplish both goals may be to have Marlon Humphrey shadow Landry. If Humphrey can handle Landry one-on-one, the defense can commit more resources to stopping Chubb and Hunt.

The 2020 Browns’ offense is like the 2019 Ravens’ offense in more ways than one. Time of possession is one of those similarities. The record-breaking offense of the 2019 Ravens allowed the team to finish 1st in the league in time of possession. Their rushing attack allowed them to play a “ball control” style of football in key situations to run the clock down and keep the ball out of the hands of opposing offenses. Lamar Jackson and company possessed the ball for an average of 34 minutes and 24 seconds per game. Teams in the middle of the time of possession pack held the ball for right around 30 minutes.

Now in 2020, the Browns (13th) and Ravens (14th) find themselves ranked just above average in time of possession. The Browns’ ranking, though, feels at least a bit misleading. Behind their two-headed monster of a rushing attack, the Browns’ have the ability to put together very long scoring drives. On Monday Night Football, it’s likely that the NFL’s top two rushing attacks will battle for possession all game. Making a big play to steal a possession away from the Browns could give Baltimore the edge that they need in a crucial game.

Nick Chubb is one of the best RBs in the NFL. On 133 carries to this point in 2020, Chubb has rushed for 799 yards and seven TDs. Without missing time to injury that resulted in Kareem Hunt having more carries than him, Chubb would be in the running with Derrick Henry for the league rushing title. In any case, Chubb leads all RBs in yards per carry (6.0). Chubb averages over half a yard per carry more than, ironically enough, J.K. Dobbins, who comes in second on that list with 5.4 yards per carry. Ravens’ rookie ILB Patrick Queen is currently a dark horse candidate for NFL Defensive Rookie of the Year. If Queen has a standout game stopping Chubb on Monday night, he can help the Ravens get a key win and make his case for Rookie of the Year on a national stage.