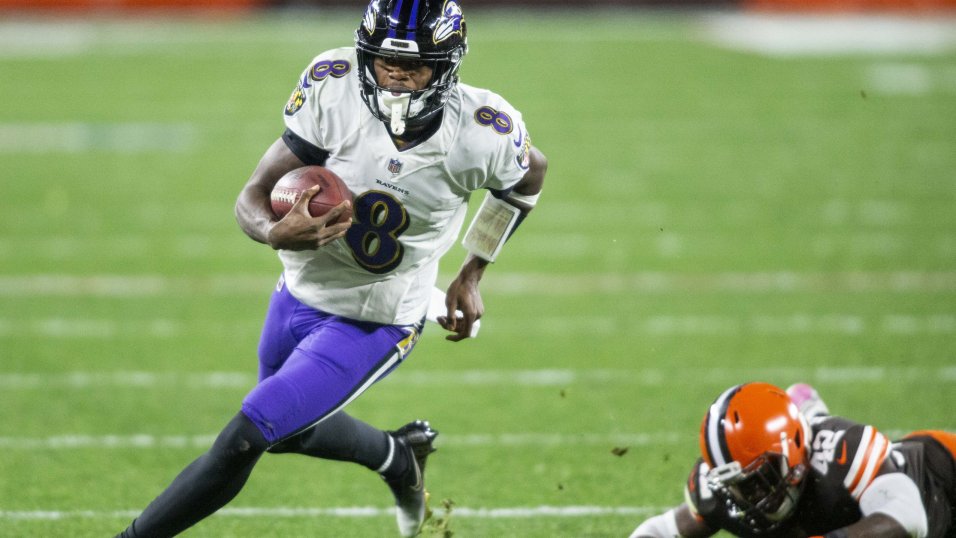 Like many of you immediately following the game, I sat stunned while basking in the glow of the Ravens 47-42 win over the Cleveland Browns on Monday Night Football. Like Angels in the Outfield, Miracle or Sandlot, this game played out like a Hollywood script – perhaps even a Superman sequel, one in which “Hollywood”, despite great adversity, finally came through as an accomplice to “The Man of Steel”.

In the second half the Ravens bled defensively. They opted to go with four corners to start the game despite Jimmy Smith’s touch and go groin injury. Smith eventually injured his shoulder and then later CB Davontae Harris left the game with what appeared to be a leg injury. And then there were two corners, one of which (Marcus Peters) left the field with a calf injury only to return to the game on his own without clearance from the team’s medical staff.

The razor thin secondary forced Wink Martindale to use Anthony Levine, Sr. at the unfamiliar position of corner. Meanwhile, the Browns adeptly targeted the Ravens’ replacements like lions in the Serengeti that zero in on wounded prey. Baker Mayfield shredded the Ravens defense, and it seemed as if death would arrive by way of a thousand paper cuts.

But the coming of age flick was far from over. The director invited even more drama.

Midway through the third quarter we learned that Lamar Jackson was being attended to by the Ravens medical staff for cramps. ESPN showed Lamar running through the bowels of First Energy Stadium (pun intended). The Browns closed to 34-28, and John Harbaugh had little choice but to turn the reins of the offense over to backup QB Trace McSorley. Things began to unravel for the Ravens – quickly. By the 6:33 mark of the fourth the Browns had come all the way back from a 28-14 deficit to take the lead, 35-34. Things looked dire.

#Ravens QB Lamar Jackson left the game cause of “cramps”

More like he had to take a 2 point conversion while playing the Browns pic.twitter.com/WwOe4sSTkG

And that’s how the Hollywood stories go, right?

Just when you think that it’s over, that the protagonist isn’t going to come out as the victor, a sudden twist of fate dramatically changes things and the tale’s hero re-emerges. As if he went into a phone booth like Clark Kent in need of Imodium, Lamar burst back onto the scene in the nick of time, to defeat the Browns and perhaps save a season that has been laced with more drama than any feature film.

As Harbaugh would later explain, “Reality is stranger than fiction”, and in the end, the game became an instant classic.

The win doesn’t place the Ravens postseason destiny in their own hands mathematically, but practically it does, assuming they can take care of business against the Jaguars, Giants and Bengals who sport a combined record of 8-30-1.

A couple of interesting facts from the game: 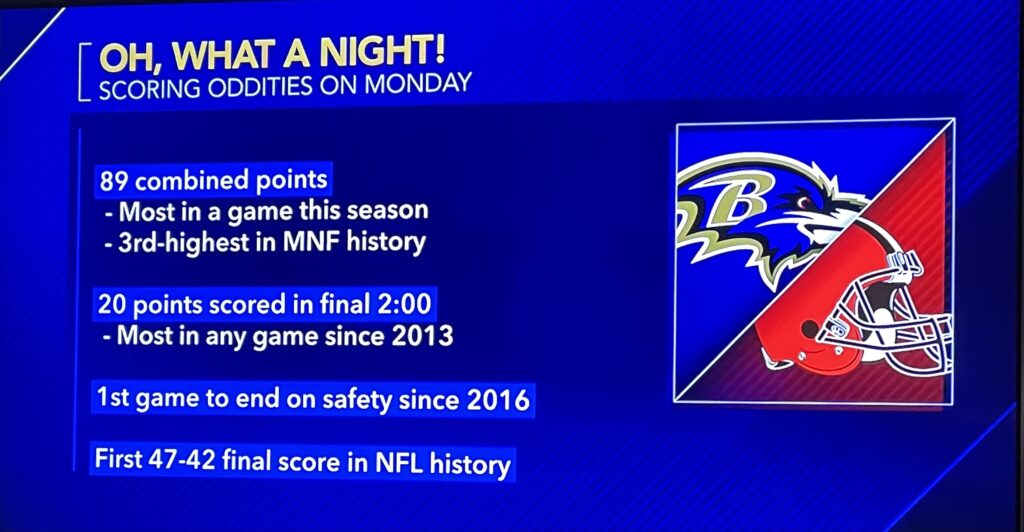 We’re now on to Jacksonville AND, the Good, Bad, Ugly & The Mo Gaba.

As any Ravens opponent should do, the Browns loaded up the box with defenders to try and choke off offensive coordinator Greg Roman’s rushing attack. And to the credit of the Ravens offensive front, Patrick Ricard, determined tight ends and insatiable RB’s, the team STILL managed to run the ball for 231 yards and FIVE TOUCHDOWNS. J.K. Dobbins and Gus Edwards were effective counterpunchers combining for 53 and 49 yards, respectively, plus 3 touchdowns. Both ran with purpose and excellent field vision…Mark Andrews came through in clutch situations. Facing a third-and-10 from their own 44 with 52 seconds to go in the first half and the game tied at 14, Jackson escaped trouble in the pocket to deliver a touch pass to his big tight end that went for 39 yards. On the very next play, Lamar ran it in from 17 yards out to take a 21-14 lead. Andrews would also come up with a couple of big catches during the game’s waning moments to set up the game-winning field goal.

Props to Bradley Bozeman and Orlando Brown, Jr. who destroyed Browns defenders on a counter that paved the way for Lamar’s first TD run…Here are a few good things from the game that might get lost in the more memorable heroics:

• With the game tied at 7 in the second quarter, James Proche effectively sold a fair catch inside the 10 that slowed the Browns coverage team and enabled the ball to bounce into the end zone for a touchback, saving valuable field position. The Ravens would score on the drive to make it 14-7.
• Down 35-34 with 5:39 to go in the game at their own 21 and facing a 3rd-and-10, McSorley hit Willie Snead with a 13 yard completion to save the possession.
• On the very next play with 5 minutes left in the game, Bradley Bozeman recovered a Dobbins’ fumble at the Ravens 43.
• With 1:51 to go in the game the Ravens were down to what could have been their final play. On 4th-and-5 from the Cleveland 44, Lamar made a miraculous return to the game and that play will go down in the annals of Ravens folklore right beside Ray Rice’s 4th-and-29 conversion. And just like that incredible first down to save a game and perhaps a season in San Diego back in 2012, enabled by a key block from Anquan Boldin, Lamar’s 44-yard TD pass to Hollywood Brown was made possible by a terrific block courtesy of D.J. Fluker who effectively sealed LB B.J. Goodson to provide ample time and space for Lamar to unload.

A moment we’ll all remember. 😈 pic.twitter.com/q3HLI9U3Hg

Marlon Humphrey chipped in with a very gutty performance, forcing two fumbles while containing Jarvis Landry. He did miss a tackle on Kareem Hunt during a 22-yard scoring strike but in the grand scheme of things, the quick score worked out for the Ravens leaving 1:01 on the clock…Patrick Queen played better against the run than in recent past games but there’s still a ways to go…Tyus Bowser made a terrific third quarter interception with the Ravens leading 28-20 to set up a 1-yard plunge by Dobbins…Justin Madubuike played well while assuming some reps from a less than 100% Calais Campbell…It won’t show up in the stat sheet but Yannick Ngakoue played his best game of the season as a Raven. He provided the most consistent pressure across the Ravens defensive front and he showed that he is capable as an edge defender…Justice Hill was a very effective gunner…Justin Tucker, what can you say about a guy who crushes a game-winner along the chilly shores of Lake Erie with a cross-breeze from 55 yards out?

Lamar Jackson missed a couple of deep shots to Snead and Andrews on consecutive plays in the third quarter, the latter of which should have been a touchdown…The pass protection provided was very suspect particularly in obvious passing situations. Lamar was sacked 4 times and if not for his speed and elusiveness it would have been worse…The Ravens defense struggled to cover running backs and tight ends, yielding 14 completions for 161 yards. Early on Browns head coach Kevin Stefanski used the Ravens aggression against them with screens…Marcus Peters was again caught peeking at the quarterback and it caused him to trip over Rashard Higgins who broke free and scored an easy touchdown…The Ravens defense struggles against a no-huddle offense. They substitute so regularly with multiple players. Defenders are caught out of position and struggle to get off the field. They were flagged for having 15 players on the field at one time. FIFTEEN!…DeShon Elliott missed out on an opportunity for a sack when he blitzed off the right edge, unabated to Mayfield who dodged the safety rather easily.

Marquise Brown needs to clean up his act or step aside. The “soulja” had a couple more drops, one of which that should have converted an important third-down on a perfectly placed pass from McSorley. Earlier in the game ESPN analyst Brian Griese took notice, throwing big-time shade on Brown. He earned it.

I probably have more patience with Marquise Brown than most but clearly this was a dig from Brian Griese. pic.twitter.com/b3ni2rur3V

On the very first play from scrimmage, Greg Roman and the Ravens offense dialed up some trickery with a flea flicker. But no one answered the call. The execution was horrible, resulting in a 1-yard loss…Four plays later the Ravens were flagged for an inexcusable delay of game…The officiating from Bill Vinovich’s crew was abysmal, particularly early on when they collectively decided that they wanted to be the game’s stars. The Ravens were flagged 8 times for 69 yards. Maybe they got a call at halftime from league headquarters on Park Avenue to calm the *%$+ down…The injuries to the defense are a big concern, particularly those to the secondary…The Browns had 493 yards of offense. Given the amount of money being paid to the Ravens defenders, they fail rather frequently to make a clutch play – regularly a step slow…The blocked PAT could have been costly. Fortunately, Tucker saved the day…Many have opined that there’s really no homefield advantage when hosting NFL games this season due to the limitations on fan attendance. That wasn’t the case in Cleveland. The Browns seemed to create their own home field advantage with a slick playing surface that temporarily undermined Lamar Jackson’s special talents.

In the first half Lamar got it done with his legs (and skates), running for 78 yards on 7 carries and 2 scores. Then the cramps and disappearing act kicked in. Maybe he had one of those infamous Cleveland Polish Boys for lunch. A game that felt like a win with Lamar, suddenly felt like one that would slip away. But then magically, Lamar took the field again without warming up and promptly tossed a 44 yard TD pass to Brown. It was the big play that had eluded Lamar in the past when the Ravens had a chance to win a game in the fourth quarter. Perhaps this gets Lamar over a career hump. Perhaps it paves the way to something great over the next two months.

It all starts again on Sunday at 1PM at M&T Bank Stadium.