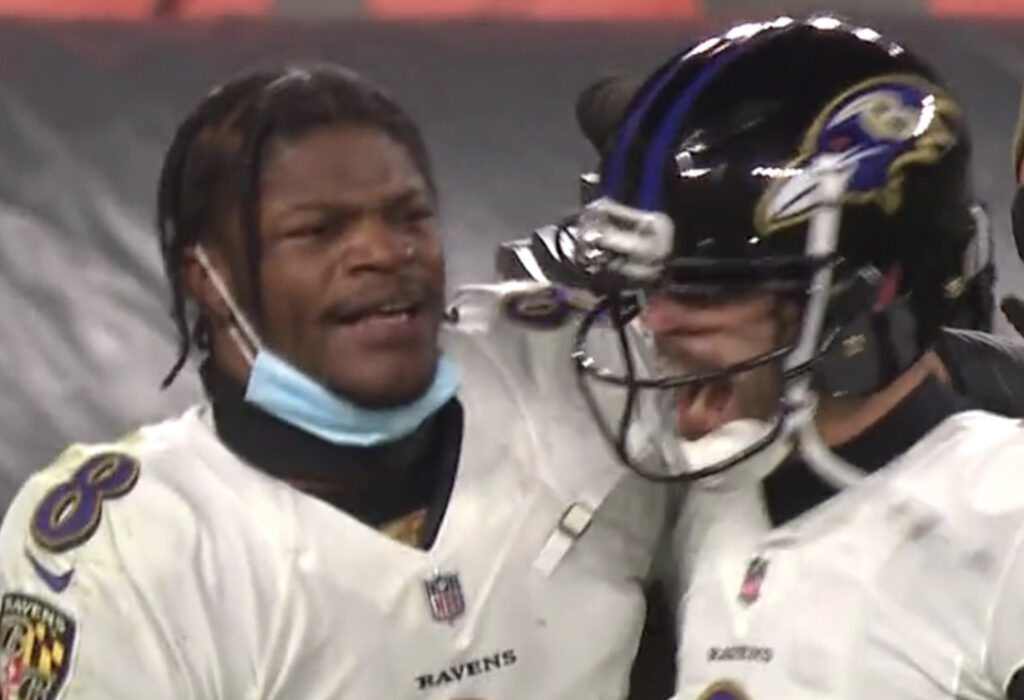 In an instant classic, the Ravens won a seesaw battle in Cleveland, 47-42. RSR staff react to the win here….

From the first drive, when Cleveland fumbled the ball twice, yet still lucked into falling on both of them and scoring a TD, it felt like it was gonna be one of those nights.

Then, Lamar Jackson took over, looking like the MVP he was in 2019 – at least on the ground. He had some electric runs, but missed a wide open Mark Andrews for what would have been a long TD, on a play that could have really put the pressure on Cleveland at that point.

Instead, the defense again folded like a cheap tent with a big fourth-quarter lead. After Tyus Bowser took an interception to the one-yard line and J.K. Dobbins punched it in to give the good guys a 34-20 lead, the wheels again fell off for this expensive defensive unit. Eric DeCosta has to be very frustrated and disappointed with the return on investment he’s getting from that side of the ball after yet another collapse.

Of course, Lamar’s cramps that kept him out of the game for the vast majority of the fourth seemed to be the death knell, with the wonderful exclamation point of Trace McSorley twisting his knee after nearly putting together the most improbable of game-winning drives on the backs of Dobbins & Gus Edwards.

Marquise “Florida Man” Brown was having the worst game of his life, with at least three drops, one on a pass that would have given McSorley and the Ravens and much-needed first down on the backup’s first series.

Even the MNF guys were clowning him.

I probably have more patience with Marquise Brown than most but clearly this was a dig from Brian Griese. pic.twitter.com/b3ni2rur3V

But then, just as it looked like Sam Koch was going to be the Ravens’ QB for a critical fourth-down attempt…Superman returned. Remember Michael Jordan‘s “flu” game? Lamar Jackson may have just had his equivalent, and Marquise Brown was redeemed in the process, with the long go-ahead TD.

Of course, the defense again folded like a free tent.

Maybe the move is to just let them score ASAP

They did just that, allowing the Browns to tie the game at 42 in about 40 seconds, leaving Lamar a minute. LJ found Mark Andrews a few times, Willie Snead once, and set Justin Tucker up for a 55-yard game-winner. Was anybody else having flashbacks of Will Hill right about now, especially on a Monday night, and especially after Tuck had already had an extra point blocked?

We can dissect the issues this team clearly this has, but for now, let’s just enjoy what will be a game that none of us will ever forget. This one is right up there with the Minnesota snow game from 2013 for ridiculous finishes in unexpected classics.

Wow. Just. Wow. Lamar Jackson is the prodigal son and the savior of the Baltimore Ravens. Any questions I had about this offense playing from behind are gone. The only question marks are defensive depth and the receiving core( what else is new) Onto Jacksonville.

My heart can’t handle this. I gotta find a new sport. Lamar takes a dump and comes out swinging like a boss to save his team despite a defense that continued to give up the cookies to Baker. Tuck-o-matic for the W! Man it feels good to be a Raven!

WOW!!! What a CRAZY game. So much to digest that it felt like five games were played tonight. The defense needs to get healthy or they could be in trouble the rest of the season. In the 4th quarter I was losing hope because they couldn’t get a stop.

Lamar coming back out to win the game was like a movie script. Tucker doing what he has done so many times before when the game and possibly season was on the line. I don’t think Ravens fans will be falling asleep too quickly after that intensity tonight.

That was quite possibly the best football game I’ve ever watched.

– Lamar Jackson returned in truly miraculous fashion; the timing simply could not have been more perfect. And the poise, the throws he made in critical moments, while hampered, was the stuff of a true franchise leader.
– The Ravens offense was near-unstoppable today. The rushing attack and the rediscovered identity reared its head again.
– Baltimore’s defense was a different story, but while it’s obviously poor that they allowed 42 points, Baker Mayfield and the Browns’ attack were outstanding tonight.
– This is the type of game that kickstarts a run to end the year. I can’t wait to see where this gutsy performance helps to get them.