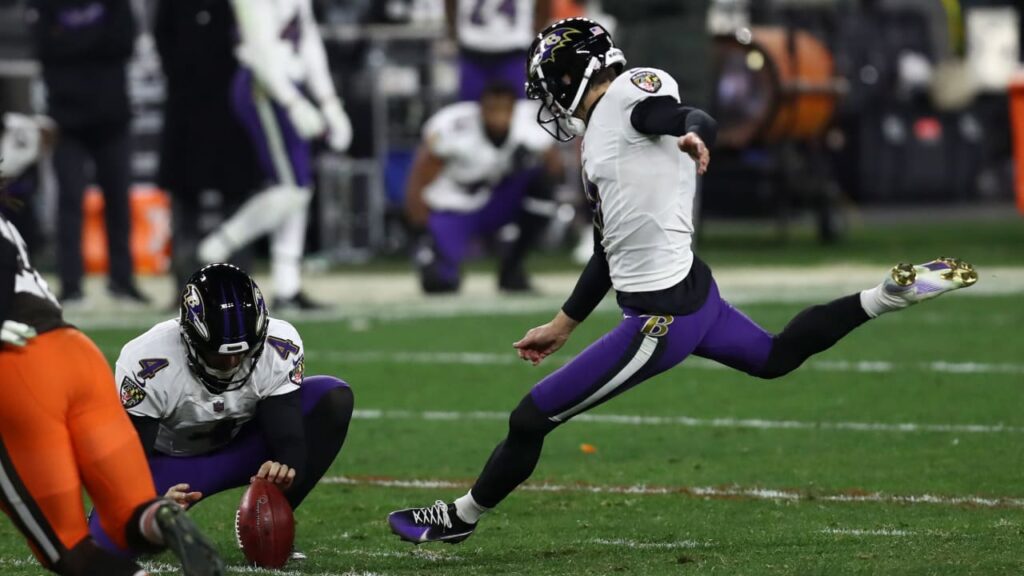 The NFL is one of the most recognizable global sporting franchises. Fans are no stranger to the excitement, controversy, grit, and passion, and despite the COVID 19 pandemic forcing games this season to be played behind closed doors, the action has been as hot as ever.

On Monday night December 14th, Baltimore Ravens’ legendary placekicker Justin Tucker served up a reminder of how dramatic football can be, nailing a 55-yard field goal with seven seconds left on the clock to beat the Cleveland Browns. But the game was compelling viewing the whole way through, building up to that decisive moment. The victory sweetens the tail end of what has been a slightly disappointing season by Ravens’ high standards.

Thriller of the year

With a final score of 47-42, the game was the highest-scoring in the history of the Ravens-Browns rivalry. It was a game full of excitement, with 9 rushing touchdowns and 33 points scored in the last quarter – 20 of those in the last 1:51.

With seven seconds left on the clock, Tucker kept his head characteristically cool to place the kick between the uprights. He actually had an extra point blocked earlier in the fierce contest, making his victorious kick even sweeter. Somehow Cleveland found time for one last attack but to no avail.

Ravens quarterback Lamar Jackson also shone, in only his second game back after contracting COVID 19, and despite suffering from cramps which put him out of action for much of the final quarter. He broke the Monday Night Football record for yards rushed – 124 – and set up the field goal in the final seconds. He was in the locker room stretching and receiving fluids when he saw that his replacement, Trace McSorley, had suffered a knee injury.

“I’m still stretching and I’m like, ‘We gotta go out there,’” he said. “It was fourth down, my guys were making great catches and we came out with the victory. As soon as I saw him go down, I came out of the locker room.”

A game like this, rich in drama and intensity that will be long remembered, IS what the NFL consists of, and what makes it have a special place in fans’ hearts all around the world, from far West to Middle and far East. We can easily say that Tucker’s 55-yarder, Lambo’s recent 59-yarder, or Prater’s best-known 64-yard long goal in the 2013 Broncos-Titans game are the reasons why the NFL won over-the-globe popularity, and one of the reasons why the sport is getting more and more recognized in the world of sports betting too.

Using the internet, it is possible to bet on every sport on the planet no matter where you live. But, as reported by ArabianBetting, aside from betting on top football leagues, or NBA, NFL is also becoming more and more attractive even to bettors in places as far away as Qatar. And with its remaining popularity through 2020, it went to show that it doesn’t rely on packed stadiums for gripping action. That’s how popular the game is.

Is Tucker the greatest player of his era?

I don’t think it’s hyperbole to suggest so. He’s the most accurate placekicker in NFL history, and widely considered the greatest ever in his position. And he’s certainly one of the greatest players in any position of the 2010s, and it was no surprise to see him featured in the NFL All-Decade team.

It’s sometimes difficult for football fans and pundits to choose a placekicker above other players in the team – the idea that they aren’t ‘real’ football players still overshadows the position. But place kicking is a highly specialized role within a squad, and as of December 14th night’s result shows, can make the difference when it comes to getting over the finishing line.

It’s true that a placekicker has the luxury of avoiding the most brutal physical aspects of the game, and their role is somehow more cerebral than that of a linebacker or running back, but the pressure for a kicker is internal. And that pressure is never more intense than a last-minute kick that determines the result of the game. So it is fair to place Tucker among the greats of the era, without a doubt.

Hopefully, at 31, he’ll have a few more years left at the apex of the sport, but when he does hang up his boots he has a promising opera career ahead of him.

2020 has been a disappointing year for Baltimore – they were denied their 3rd consecutive AFC North title since their loss to Pittsburgh Steelers in week 12. They’ve been plagued by both injuries and coronavirus diagnoses. Their position in the Conference means they’re still in the hunt for the Playoffs, but Week 15 against Jacksonville Jaguars is a crucial fixture – a real must win. And with both their quarterbacks recovering after the bruising encounter with Cleveland Browns, nothing is certain as far as the starting line-up goes.

Browns vs Ravens was chaotic, brutal, beautiful, and a blissful few hours of escape from this gloomy year. A game that was settled by a long kick from one of the most outstanding players in recent years, and will go down as one of the great fixtures for that day.