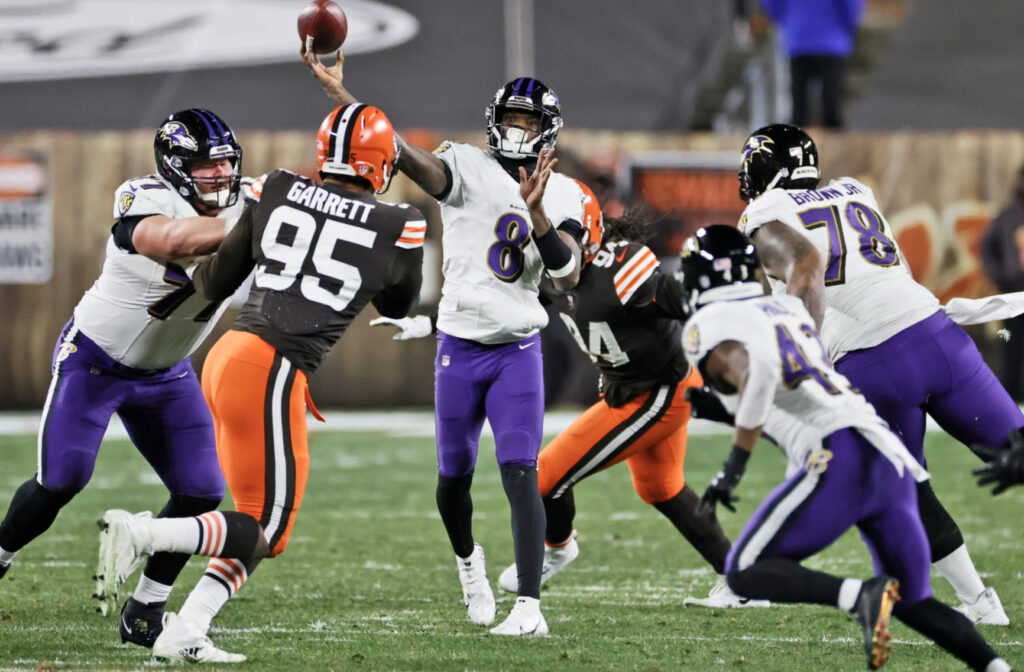 ESPN should have cued dramatic background music when Lamar Jackson emerged from the Ravens’ training room after dealing with cramps against the upstart Cleveland Browns.

The game and perhaps the entire 2020 season hung in the balance on a fourth-and-5 as backup quarterback Trace McSorley was sprawled on the turf with a knee injury. Wide receiver Willie Snead was throwing passes on the sideline because Baltimore didn’t have a third-string quarterback.

Jackson sprinted onto the field with assistant certified athletic trainer Kevin Domboski tagging along to make sure the reigning NFL MVP was indeed okay to play. Domboski’s official diagnosis didn’t matter because nothing was going to keep Jackson out of the game any longer.

“I was catching an attitude, because it wasn’t going the way we wanted it to [go],” Jackson said. “And then I saw him go down, and I was like, ‘We’ve got to start now. We’ve just got to go out there now.’ And I started running out there – ‘Kev’ was running with me. It was fourth down, the offensive line blocked their tail off, and our guys just made great catches, and we came out with the victory.”

Jackson took the next snap and threw a 44-yard touchdown pass to the embattled Marquise Brown for the go-ahead score. Brown had three previous drops and the Browns’ defense softened the coverage on him.

There were more heroics.

This time, it was Cleveland quarterback Baker Mayfield who threw a 22-yard touchdown pass to Kareem Hunt that tied the game, 42-42, with 1:04 remaining. The game seemingly was headed to overtime, but Jackson had some more magic left in him.

With just under a minute left, Jackson made a couple of key completions to his favorite target, tight end Mark Andrews. The Ravens moved the ball just far enough for kicker Justin Tucker, who moments earlier had lobbied to attempt a 65-yarder.

Instead, Tucker nailed a 55-yard kick through the middle of the uprights and the Ravens managed a safety on the ensuing kick-off for an improbable, inspiring, and confidence-building 47-42 victory.

Even the usual brash Mayfield had to tip his cap.

“[Jackson] is an unbelievable player, an unbelievable guy,” Mayfield said. “His work ethic is unreal. Obviously, he is extremely talented. It was like a scene out of a movie. I hate that for (Ravens QB) Trace McSorley. Praying that he is OK. As soon as he went down, you could see Lamar come trotting back onto the field. It was like geez. He is a great player. You are just going to have to try to contain him. You are never going to be able to stop guys like that. He is just a great player.”

The Ravens improved to 8-5 but still likely need to win their final three games to make the playoffs. However, the Ravens have a favorable schedule with matchups against Jacksonville (1-12), the New York Giants (5-8), and Cincinnati (2-10).

No matter what happens, the victory over Cleveland will go down as one of the greatest in franchise history. It was also the type of win that could be the spark the Ravens have been waiting for all season.

“We played a very good football game,” Ravens coach John Harbaugh said. “It’s a game that’s going to go down in history. So, [I’m] just proud to be a part of it, and I’m really proud of our players. All I can say is at the end, I was doing a little bit of praying. I will say what was said earlier, what ‘Tuck’ said; all praise and glory to God. Our guys had faith and trust and belief, and sometimes, that’s what it takes.

Jackson once again silenced his critics who claimed he was incapable of winning a big game. The stakes could not have been much higher on a frigid night in Cleveland.

He has been a lightning rod of criticism this season, but he’s always been effective in blocking the naysayers. The next step for Jackson is winning a playoff game, and the odds became better when a first-round showdown with Kansas City is now unlikely. The Chiefs took over the top spot in the AFC playoff race and are on course to get a bye.

When the Ravens are clicking on all cylinders, they’re capable of beating anyone.

“Our team fought hard,” Jackson said “The offense played great today. We still have little things to clean up – we didn’t play a perfect game. But we’re where we want to be right now. We’re excelling right now.”