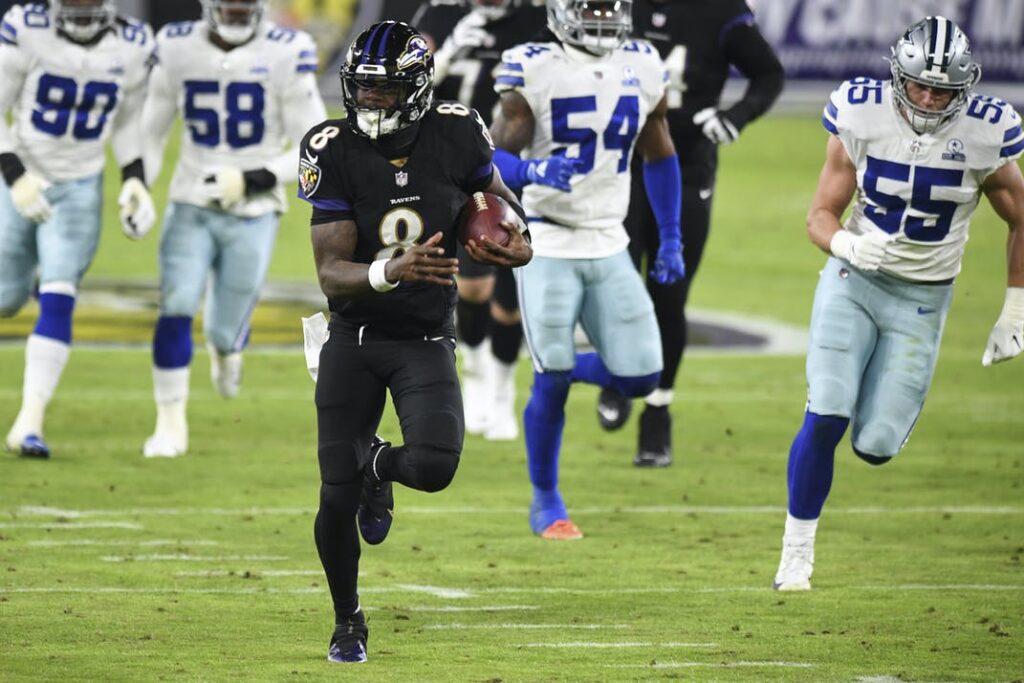 There will be some common threads running through each of the keys in the Week 15 edition of ‘Battle Plans.’ The first common thread is that the Ravens absolutely should beat the Jaguars. Baltimore is an 8-5 football team fighting for a playoff spot. Jacksonville is a 1-12 football team fighting for the right to select Trevor Lawrence with the 1st pick in the 2021 NFL Draft. The second common thread is that the Ravens absolutely must beat the Jaguars.

Sunday’s contest is, for all intents and purposes, a “must win” game for the Ravens if they hope to earn a playoff berth.

If the Ravens hold onto the ball and win the turnover battle, there is little chance that they lose on Sunday.

Screens to Duvernay with Bryant Blocking

Once again, COVID-19 has struck the Ravens’ locker room. In particular, COVID-19 has found it’s way into the Ravens’ WR room. As a result of contact tracing, Baltimore placed wide receivers Marquise Brown, James Proche and Miles Boykin on the Reserve/COVID-19 list on Wednesday. While none of the three tested positive and all three should be eligible to play on Sunday if they continue to test negative, they’ll be without a few days of practice.

For at least the rest of the 2020 season, the Ravens are going to lean heavily on their rushing attack. While the rushing attack is the backbone of the Ravens’ offense, Greg Roman needs to continue to refine a passing game to go alongside it. One way to get the passing attack going against Jacksonville is by throwing screens to Devin Duvernay. Duvernay is a speedy WR who is built more like a RB than like a WR. In a twins or trips alignment with Dez Bryant or Miles Boykin beside him, Duvernay could on quick hitting passes.

Bryant and Boykin, big-bodied WRs who are effective blockers, could allow the rookie to break a tackle and pick-up nice chunks of yards for the Ravens.

The Jaguars defense is simply not very good. Through 14 weeks, they have allowed the 5th most passing yards and 3rd most rushing yards of any NFL defense. Overall, they have allowed the most yards of any NFL team. 47.6% of their opponent’s offensive drives end in points. On Sunday against the Jaguars, the Ravens have an opportunity to continue to fine tune the rushing attack that they will rely on if they make the playoffs.

Ravens fans have become accustomed to the sight of Lamar Jackson running right through the heart of the defense on his way to a touchdown. Oftentimes when Jackson finds himself completely alone as he runs towards the end zone, it is a result of a play known as “QB G/T Counter” (it could go by much longer and hundreds of different names).

On a QB G/T Counter, a guard and tackle (G/T) pull around. The other three offensive lineman block down. The RB, or WR in jet motion, can take the handoff around the edge of the down blocking offensive linemen like he’s running a sweep. If the QB keeps the ball, he follows the pulling guard and tackle the other way. Variations of this play resulted in Jackson TDs against Washington, Dallas, Philadelphia, and Cleveland last week.

The Ravens’ should continue to practice and experiment with variations of this play against Jacksonville.

Without a big play passing attack, the QB G/T Counter could be the Ravens’ big hitter in the playoffs.

In 2020, Jaguars’ RB James Robinson is one of the NFL’s most interesting players. A rookie undrafted free agent out of Illinois State, Robinson is 3rd in the entire league in rushing yards. Robinson has more rush yards than every single player in the NFL not named Derrick Henry or Dalvin Cook. Just last week, Robinson cracked the one-thousand-yard mark. One of the reasons for Robinson’s success has been his status as a true “bell cow” RB. Robinson has 224 carries this season. Other Jags’ RBs have combined for a grand total of nine carries.

One look at Robinson’s rush charts (https://nextgenstats.nfl.com/) is all it takes to see that Robinson has more success when he runs behind the left side of his offensive line. The Jags’ tendency to run Robinson to the left comes from the desire to get him behind 2017 2nd round pick Cam Robinson. One way that the Ravens can combat the Jags’ tendency to run left is by shifting or slanting their defensive line to the defense’s right. For a defensive linemen, “slanting” typically means moving diagonally at the snap. Instead of moving forward, the linemen attack diagonally down a gap with the intention of disrupting the offensive linemen’s normal blocking rules and assignments.

Slanting towards Jacksonville’s rush tendencies could throw them off their normal play calling rhythm and force them away from their preferred plays.

Early in the 2nd round of the 2020 NFL Draft, Jacksonville selected Colorado WR Laviska Shenault. Shenault, a 6’1”, 227-pound WR, is a physical and well-built athlete. In college, “Viska” took snaps out wide, in the slot, as a wing, as a running back, as a returner and as a wild cat QB. Shenault finished his three-year career as a Buffalo with 42 carries for 280 yards and seven rushing TDs.

In a game in which the Jaguars find themselves as big underdogs with absolutely nothing to lose, they may try a few creative plays on offense. If the Ravens get aligned on defense and see Shenault aligned or motioning into the backfield, they need to have an “alert”. Alerting the entire defense to Shenault in the backfield and the possibility of a wild cat run, the read option or a trick play. Defensive ends should not chase the play and defensive backs should be wary of the double or reverse pass.

Being alert to Shenault in the backfield could prevent the type of big play that could keep Jacksonville in the game.

Get Humphrey on Chark

DJ Chark is the Jaguars’ most dangerous weapon in the passing game. In 2019, Chark caught 73 passes for 1008 yards and eight TDs. Despite very underwhelming QB play in 2020, Chark has caught 45 passes for 591 yards and four TDs. Even though he’s having a down year from a statistical perspective, the LSU product still has all the tools that he needs to be a dangerous receiving weapon.

Wink Martindale should let Marlon Humphrey follow Chark around all afternoon. Marcus Peters has had some below average performances over the last few weeks (and is a bit banged up) and Jimmy Smith might not have the speed to keep up with Chark. Preventing a big play from Chark should be the Ravens’ number one priority in the passing game.

Besides limiting Chark, having Humphrey take care of the Jags’ top receiver will allow the Ravens to give more attention to James Robinson.

The Jaguars signed rookie CB Luq Barcoo as an undrafted free agent out of San Diego State University this offseason. As a result of multiple injuries at the cornerback position, Barcoo has been forced into action much earlier than the Jaguars ever planned on. On the other side of the ball, the Ravens’ expect Dez Bryant to be available to play after spending time on the COVID-19 reserve list. Bryant, a Dallas Cowboys’ legend, currently ranks 123rd in receiving yards in NFL history.

Watching a player with Bryant’s production occasionally line up across from an undrafted free agent rookie with four games on NFL experience should be fun to watch.